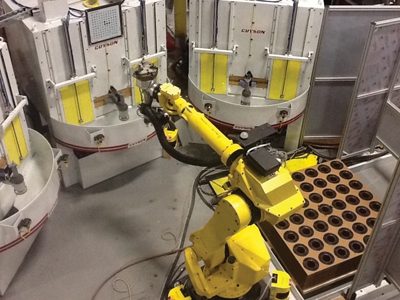 Guyson Corp. has engineered and built a work cell for grit-blast descaling of forged automotive components with three automated blasting machines that are loaded and unloaded by a vision-guided material handling robot.

The RXS-400 rotary blast system has a 180-degree indexing table with two spindles and a single blast station at which the fixtured component is rotated at controlled and adjustable speed as target surfaces are exposed to the blast from multiple suction-blast guns that are rigidly bracketed in position at the correct angles and distances for complete coverage during the timed blast cycle. The blast machine manufacturer's standard table indexer for the RXS-400 has an accuracy at the spindle of +/-0.0031 inch, making it fully compatible with robotic pick-and-place equipment.

In the finishing cell, the spindle-blast machines are arranged in a semi-circle with the load station of the take-away conveyor as the fourth loading position. A Fanuc M-710iC/50 six-axis robot is firmly mounted to the floor at the center of the blasting cell alongside the picking station, where a skidded stack of trays of components is located within reach of the articulated robotic arm.

End-of-arm tooling for the robot consists of two different pneumatically actuated three-finger grippers, one that grasps parts inside the center bore, and one that grasps them by the outside diameter. Also mounted near the I.D. gripper at the end of the arm is a camera with an annular LED light array. In the Fanuc iRVision system selected for this installation, the camera is integral with the R-30iB robot controller and provides 2D imaging guidance for the machine-tender to quickly and accurately locate and pick components from the in-feed tray.

To maximize the efficiency of the cell in unmanned operation, integration of the robotic automation system relies heavily on engineering of the controls of the automated blast machines, including electronic sensors, electromechanical elements and customized software. Not only does the design ensure that the blast system's programmable automation controller (PAC) seamlessly exchanges process data with the robot controller, but it enables powerful features to be built into the human/machine interface, such as tracking of individual components as they move through processing and easy access to production statistics, fault records and maintenance advice. It also supports the acquisition and logging of process data, if required.