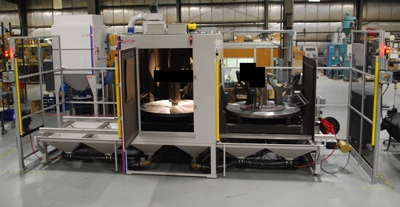 Guyson Corp. has introduced a robotic blast system with two turntables on a shuttle transfer cart that facilitates loading and unloading during the automated grit blasting cycle. The RB-72 TT pictured was designed for production descaling and surface preparation of components up to 66 inches in diameter and weighing up to 4,000 pounds.

A 6-axis FANUC M-710iA robot is mounted on a robust pedestal in a vestibule at the rear of the blasting enclosure and isolated from the grit-blast environment by a custom-tailored suit of laminated fabric. The robot is used to direct two pressure-blast nozzles attached to the end-of-arm tooling. The FANUC R-30iB controller stores motion programs for processing dozens of different components and is configured as slave to the robotic blast system's programmable automation controller (PAC).

The twin turntables of the RB-72 TT are servomotor driven and controlled as a seventh and eighth axis of coordinated robotic motion to allow precisely regulated rotation or radial orientation of components during the robotic blasting and air wash blow-off cycles. Each table is designed to accept and positively locate interchangeable fixtures for a range of different sized components.

The doors that seal the blast chamber are attached to the powered transfer cart, and the track extensions on which the shuttle cart rolls are fitted with vacuum return catch trays to capture any grit carried out on the cart. Safety light curtains located near the track extensions prevent indexing of the transfer cart if an attendant may not be clear of the area. A safety interlocked door is provided at the front of the robotic blast system and at the robot vestibule to allow access for periodic inspections and normal maintenance activities.

A scanner wand is provided at each side of the robotic grit blasting system to automate component identification and call-up of the correct process recipe and motion program for dozens of different parts. When the code is scanned from a traveler slip or a mark on the part itself, and the component is recognized, the PAC recalls blasting parameters such as blast pressure and grit flow rate for that particular part number, and it confirms that the robot controller is prepared to execute the correct motion program associated with that component. Scanner technology can also be used to identify the part-holding fixture and ensure that it matches the process recipe.

The twin turntable configuration keeps the time between blast cycles to a minimum. Once a queued component is loaded onto the table and scanned-in, the attendant can be occupied with other duties. At the end of the blow-off cycle for the part currently being processed, the robotic blast system will automatically index the transfer cart and initiate the next blasting operation.