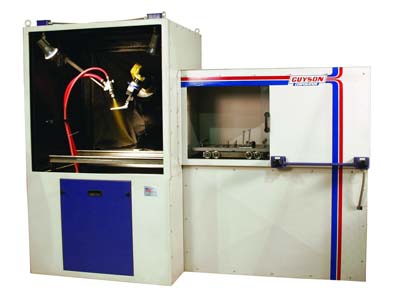 Guyson Corp. has introduced a robotic blasting system that incorporates a component-manipulating 6-axis robot and a shuttle transfer cart to automate processing of tray-loads of components. The new Model RB-TRR-900 is for precise surface preparation, shot peening and cosmetic finishing operations. The robotic blast machine is provided with a single suction-blast gun or pressure-blast nozzle that is rigidly bracketed in a fixed position inside the 42" x 42" x 42" blast chamber. Guide rails form a track extension into an antechamber on one side of the blast cabinet. Rolling on the track, the transfer cart bearing a tray full of components is moved in and out of the blast enclosure by a precision linear actuator, and a pneumatically actuated vertical sliding door closes to isolate the load/unload station from the blasting zone. A Fanuc M-10iA robot with a custom-engineered pneumatic gripper serves as a component handler in the automated blasting system, grasping and removing a part from the tray, presenting the component to the blast, then replacing the finished work piece. A tailored skirt seals the cabinet wall and protects the robot from the potentially abrasive environment of the blast chamber. Fanuc Robotics offers larger and smaller 6-axis robots that can be integrated in the RB-TRR-900, should a different payload or reach be required. To blast a production lot of parts, a tray of oriented components, typically six to 24 in number, is placed on the transfer cart, the sliding load door is closed and a part identification number is entered or selected at the touch-screen control panel. Alternatively, component recognition features are available, including a bar code reader, to positively identify the work and prompt the recall of the correct motion program and blasting process recipe, with automatically controlled parameters such as blast pressure, media flow rate and the duration of the blast and blow-off cycles. While the robotic blast system methodically and identically repeats the surface treatment on each of the components in the batch, the human operator is freed for an extended period to perform other work. According to the blast equipment manufacturer and authorized Fanuc integrator, the robotic component manipulator constantly and accurately maintains the specified blast angle, nozzle offset and surface speed, even when following the contours of complex-shaped aerospace or medical parts, which makes it possible to produce extremely consistent surface conditions and eliminate non-conformities in finish quality. Prospective users of automated and robotic blasting systems are invited to submit sample components for free laboratory testing and application engineering evaluation at the machine builder's factory in northeastern New York State.