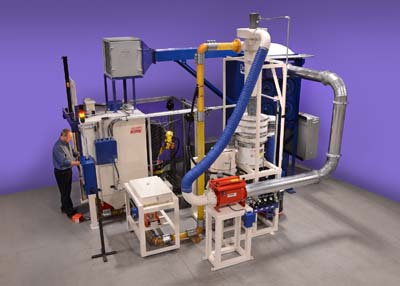 January 12013 — Guyson Corp. has designed and built a 7-axis robotic grit-blast machine that is configured for precision roughening of component surfaces in a production thermal spray coating cell. The Model RB-RSSA-8 has a 54 x 46-inch blast process chamber that is 42 inches in height.

A single pressure-blast nozzle is fed by a 3.5 cubic foot capacity, ASME-certified pressure vessel. Blast nozzle motion is provided by a Fanuc M-10iA robot and is coordinated with component rotation on a servomotor-driven auxiliary axis controlled by the Fanuc R-30iA robot controller. The hollow wrist of the M-10iA allows routing of the pressure-blast hose through the articulated robotic arm. A custom-tailored suit isolates the robot from the abrasive environment of the blasting enclosure and seals the back wall of the blast cabinet while accommodating the full range of motion of the nozzle manipulator.

The spindle of the RB-RSSA-8, fitted with a jawed chuck or a T-slotted turntable, can be controlled to turn clockwise and counterclockwise to accurately orient the component throughout the blast cycle, or it is capable of rotation at speeds adjustable from 0 to 300 RPM.

During the programmed blast cycle, the robotic grit blasting system consistently maintains the correct nozzle angle, stand-off distance and surface speed to produce uniform surface roughness on target areas of the component, without under- or over-blasting and with no wasted motion. With repeatable robotic blast processing and special features of the media reclamation and delivery system, the specified surface profile can thus be held within a narrow range, and variation in the quality of critical surface preparation can be virtually eliminated.

To strictly control the sizing of the blasting grit and help ensure that surface texture stays within specifications, the robotic blast machine's media reclaimer stack-up not only includes a cyclone separator that removes dust and fine particles, but also a vibratory screen classifier that feeds only grit of the specified size to the pressure pot. The blast pressure is electronically monitored and automatically regulated by closed-loop control to keep it from wandering off the value assigned in the process recipe associated with the component.

Blasting grit flow to the blast nozzle is also monitored. Electronic level sensors detect when the amount of blast media is beginning to get low, and new grit is automatically added well before a shortage could compromise the surface preparation process. For coating cells where the component material may raise concerns about flammable metallic dust from the grit-blasting operation, the blast system manufacturer offers special dust handling options, including an explosion-vented dust collector, metal ducting between the dust separator and the collector and an automatic isolation valve between the media reclaimer and the dust collector. Wet dust collectors and automatic fire suppression systems are also optionally available from the blast machine builder.