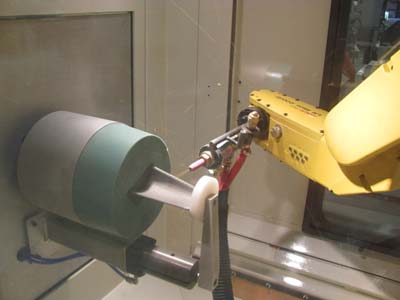 Guyson Corp. has introduced a lean robotic blast system that is designed for single-piece-flow processing of precision components and is offered with special adaptations for shot peening or surface preparation of turbine buckets and blades. The Model RB-600 is available in suction-blast or pressure-blast versions and is compatible with the full spectrum of shot and grit blasting or peening media.

A single blast gun or pressure nozzle is directed by a 6-axis Fanuc Robotics LR Mate 200iC robot arm rigidly suspended from the removable roof of the RB-600 blast cabinet. Nozzle motion is coordinated with component rotation by a servomotor-driven spindle that is controlled as a seventh axis of robotic motion, enabling the correct blast gun stand-off distance, angle to the substrate and surface speed to be accurately and constantly maintained as the robotic blast machine follows the contours of complex-shaped parts during the programmed impact treatment routine.

Compared to multiple-gun automatic blast machines in which the nozzle angles required for coverage of a particular component are approximated, the RB-600 uses, at minimum, half the compressed air, delivering substantial energy savings as it precisely executes the process recipe for each separate component. Set-up time, gun adjustment and trial runs for change-over to process a different part are eliminated by the robotic blast system.

To simplify loading and unloading of parts, the rotary spindle and component-holding fixture are mounted on the gearmotor-actuated flip-down door of the RB-600 robotic blast system, so blasting operations are performed with the spindle in a horizontal position, and unload/load while it is oriented vertically within easy reach of the operator. For shot peening of turbine blade roots or for grit-blast surface preparation in the coatings work cell, purge air is supplied to the spindle base, and a swing clamp is provided to press and seal the bucket and its urethane rubber mask against the part-holding fixture, forcing a flow of compressed air through the cooling vents of the hollow blade to prevent entrapment of blasting media particles inside components.

The blast machine designer and manufacturer claims that its fixturing system positively locates interchangeable masks for a variety of similar components to allow flexible automated processing in a single robotic blasting machine of a range of product that might otherwise require multiple blast cabinets dedicated to one part. The robotic blast system has the capacity to store and recall motion programs and blast process parameters for more than one hundred different components, and robot programming can be done using a teach pendant or off-line programming software.