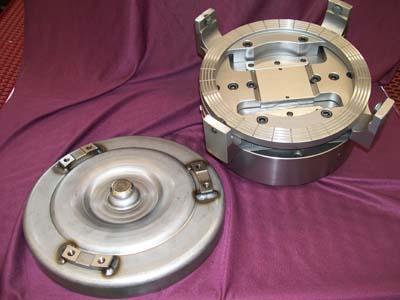 Northfield Precision Instrument Corp. introduces its Model 1070-250W Air Chuck. The 1070-250W is a 2-jaw chuck with a special quarter inch opening on diameter (1⁄8" opening per jaw). This chuck is modified for Spring Clamp and air open, using Nitrogen compressed gas springs in the spring clamp mechanism. The operators chose this modification so if they lose air pressure to their machines, the parts won't fly out and damage the operator or machine.

The chuck grips the part (a cover for a torque converter) on 4 points with special carbide-coated grippers. The chuck opens at less than 50 psi and grips the part at a constant 35 psi. The Jaws are special hardened and ground 1018 steel with a Rockwell C hardness of 58-63 (range from 58 to 63). The chuck also contains a full-circle part stop for axial location. The stop is also hardened and ground with the same hardness as the jaws.