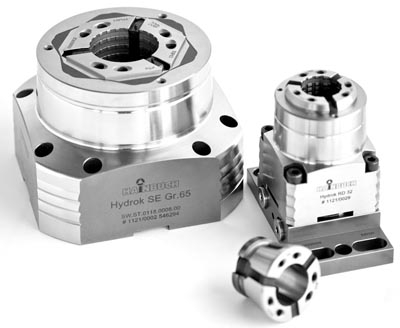 On Lake Constance in Salem, not only can you visit an elite school — you can also learn how the family-owned business functions in the best case scenario. The protagonists: A father, two sons, just under one hundred employees – in addition, innovative ideas from inside and outside, a lot of manufacturing knowhow and the crucial aids for flexible production.

At the beginning: In 1990, in addition to his position as production supervisor in a large company, Wilhelm Seeger started with his own contract manufacturing operation. His company grew progressively and in 2005 the double life was no longer possible: Seeger became entirely his own boss. It was easier for him to make this decision because his two sons, Moritz and Manfred, would soon, after training and university studies, join him in the company.

Since then, the two second-generation managers have been taking care of new projects, orders, customer contacts with price negotiations, and all that this entails. The company has close to 100 employees and works in three-shift operations. "In 2012 we delivered just under 49 million turned parts," said second-generation manager, Moritz Seeger. "When we heard this number we got a little pale."

Seventy percent of the customers are suppliers to the automotive industry for passenger vehicles and truck customers, 25 percent are classic machine tool industry customers, and the rest are from the medical technology industry and other industries.

Standing in rank and file are 65 sliding headstock automatic lathes from Star, 25 fixed headstock automatic lathes from Miyano, and three small Haas machining centers. All machines are equipped with a FANUC controller, because Seeger wants consistency in this area as well: "I can immediately transfer the same part from machine 1 to machine 64. There is no mishmash, all employees are thoroughly familiar with all machines. That is the flexibility that we need here."

Four years ago, a supplier to the automotive industry placed a large order, a component for the timing gear in gasoline and diesel engines. Large quantities of 300,000 delivered parts per year were envisioned. The resolution to keep the firm's own level of flexibility as high as possible brought Seeger to the idea of a new clamping system. "We considered both options: To have a separate clamping fixture manufactured for this part, or to purchase a flexible system on which the diameters can vary. There were advocates and opponents for both variants," Seeger said. In the case of a diameter changed by just one millimeter a separate clamping fixture adapted for this part would become worthless from one day to the next. Moreover, there was the complex process of changing a clamping fixture weighing more than 200 to 300 kg. For this Seeger would have needed a lot of space and a crane, neither of which he had. Uwe Fischer, a technical consultant in outside sales at HAINBUCH had advised the Seegers four years previously.

Seeger had become aware of the HYDROK hydraulic clamping system offered by the Marbach-based company, HAINBUCH, through an ad in a trade journal. So Fisher drove to Salem and introduced the modular system. He recalls: "What counted for Seeger, were flexibility and fast change-over. The smallest stationary chuck of this system, the HYDROK 32, enables multiple clamping where space is at a premium. Via the quick change-over system the clamping head can be converted from diameter 4 to diameter 32 with a single hand motion. The required concentricity and accuracy are achieved." For the timing gear component that is turned and drilled, the position accuracies and the guide bores were and are the criteria: They must remain in the tolerance of 5μm. In the meantime, three different diameters of the same component are manufactured, this means that the decision for the HAINBUCH system quickly paid off.

In addition to flexibility and accuracy, easy handling and the minimal spatial requirements were also crucial factors. Seeger in this regard: "We wanted a small and space-saving machining center, that's why we have the Haas DT-1. Then we calculated: Precisely 30, size-32 HYDROKs fits on the machine table plus traverse distances, and the space is optimally utilized. The base plate with the HYDROKs remains stationary in the machine, and we only change the clamping heads, depending on diameter."

Fisher added: "Today, the intelligence of the system is in the clamping heads. The individual segments of the clamping head are vulcanized together and hardened. Thus, we achieve this consistent clamping force and repeatability."

In the meantime at Seeger there are already two fixtures with the HYDROKs in use, and the trend is upward. Seeger wants to concentrate on his existing customers and do his work well in this area, then new orders or fields of activity will usually come about entirely on their own. "Large customers want you to grow with them," he said. "Starting in 2014, instead of the 300,000 parts that we deliver today, we should deliver one million parts."

Often Seeger and his employees are brought on board in the design phase of a new component. Together with the customer, they consider what the parts must ideally look like. For the new quantities starting in 2014, not only will additional HYDROKs be needed, new capacities will be needed as well. Construction of a new manufacturing hall has already begun. Currently manufacturing, parts testing and assembly are distributed over three halls, which are fully utilized to the last meter, a "logistical horror" for Seeger.

Since not only manufacturing, but along with it parts testing is also growing continuously, future spatial requirements are preprogrammed. More than 70 percent of the lots are tested 100 percent. Here as well, this is a consequence of the rigorous requirements that apply in the supplier industry.

If just one part in a lot of 10,000 is faulty, all 10,000 parts are returned. Consequently, 25 employees now work in parts testing and outgoing goods inspection. Moreover, it is fitting that Manfred Seeger is responsible for the automation of parts testing. He designed and built all automated measuring cells, such as the test cell with automated palletizing of turned parts with two-camera systems, for 100 percent inspection. The software forQC comes from Fraunhofer IPA. Thus, everyone in the family company has his area. "Although my father is no longer the owner, he is the undisputed boss," laughed Moritz Seeger. Thus, the enterprise appears to be ideally equipped for the future.