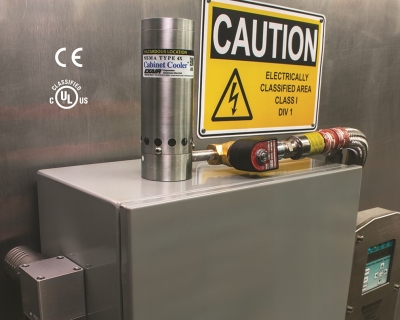 EXAIR's new Hazardous Location Cabinet Cooler Systems have achieved the UL classified designation for Div1 environments. They have been tested by UL and passed their stringent requirements for use upon classified purged and pressurized electrical enclosures within Class I Div 1, Groups A, B, C and D; Class II Div 1, Groups E, F and G – and Class III environments.

The cooling capacity of up to 5,600 Btu/hr. is ideal for electrical enclosures with problematic overheating. They are CE compliant and available for NEMA 4 and 4X enclosures.

EXAIR HazLoc Cabinet Coolers circulate 20° F (-7° C) air inside the enclosure to prevent high temperature faults. They mount in a standard electrical knockout while keeping the NEMA 4 or 4X rating of the enclosure. Cabinet Cooler Systems include an auto drain filter separator to ensure no moisture passes to the inside of the electrical enclosure. An optional thermostat control minimizes compressed air use and keeps the enclosure at ± 2º F of the setting.

EXAIR’s full line of Cabinet Cooler Systems are available for NEMA 12, 4 and 4X enclosures from 275-5,600 Btu/hr. and are UL listed and CE compliant with no moving parts to wear out. Applications include cooling control panels, PLCs, microprocessors, fractional Hp variable frequency drives and robotics.