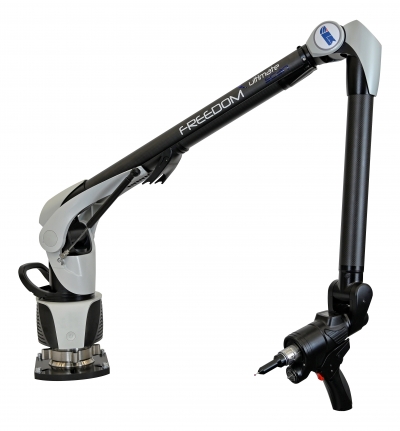 LK Metrology has been manufacturing static co-ordinate measuring machines (CMMs) since 1963. It has now expanded its FREEDOM arm range of 3D articulating arm metrology systems, or portable measuring arms, with the launch of five ultra-accuracy models in both 6-axis and 7-axis variants. The 10 new arms bring the total number of different varieties available from LK to 34. International sales and support is through the company's offices in the UK, North America, Belgium, France, Germany, Italy and China as well as via a worldwide distributor network.

Called FREEDOM ULTIMATE and FREEDOM ULTIMATE SCAN, the new arms are available with measurement volumes from 2.5 to 4.5 metres, according to model. Each complements the comparable size of existing FREEDOM CLASSIC and higher accuracy FREEDOM SELECT products with six axes designed for touch probing, as well as the 7-axis SCAN equivalents for multi-sensor metrology including laser scanning.

The ultra-accuracy arms, which are shipped with a calibration sphere and verification bar with ISO 17025 certification, offer increased precision in applications spanning quality control and on-machine verification to reverse engineering, virtual assembly design and 3D modelling. Measuring accuracy is enhanced by up to 8% in comparison with the next most precise products in the range, SELECT, while compared with the entry-level CLASSIC arms the improvement is up to 43%.

The tactile probing accuracy of all FREEDOM arm products is certified to ISO 10360-12. Addition of the extra degree of freedom in all SCAN models provides infinite movement to enable scanning with a Nikon Metrology ModelMaker H120 laser scanner. All arms may be supplied with a variety of probe kits, styli, mounting rings including some with a magnetic or vacuum base, tripods, rolling stands, and carts with laptop arm.

Carbon fibre tubular construction ensures stability under challenging operational conditions. A proprietary counterbalance makes manual movements light, promoting ease of use even when trying to access awkward areas of a component. Optional Wi-Fi connectivity and battery power allow completely portable wireless measurement for maximum flexibility. The arm can be stowed and locked in place between measurements and when it is being relocated. Even the largest FREEDOM arm model weighs less than 11 kilograms, making set-up and repositioning quick and easy.

A notable feature of the arms is the inclusion of absolute rather than incremental rotary encoders to feed back the angular position of every joint to the control software. The equipment may therefore be used immediately on start-up, avoiding the need for encoder referencing before use every time. This raises productivity, as does the highly repeatable hot-swapping connection that allows probes to be exchanged quickly without interrupting the measuring process for recalibration. Contributing also to efficiency and convenience is an LCD display with a quick-access menu on the probe wrist, putting the most useful information directly in the hands of the operator during measurement.

A strong line-up of third-party inspection software can be supplied by LK with its FREEDOM arms, including InnovMetric's PolyWorks Inspector™ that has the ability to swap programs seamlessly between portable and static CMM platforms. ArcoCAD metrology software from Metrostaff is also available, as is Nikon Metrology's Focus Inspection for data analysis, while CMM Manager inspection package from QxSoft may be used for touch probing only.