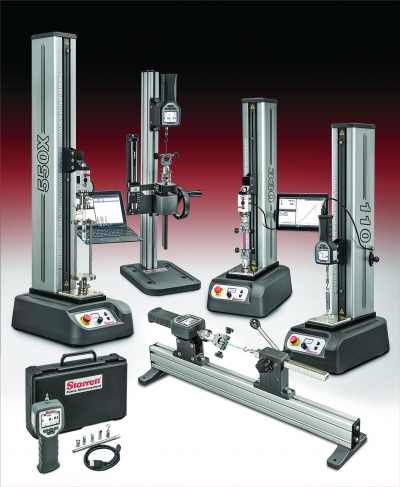 The Starrett L1 line of force solutions consists of systems for computer-controlled force measurement, digital force gages, Starrett FMM digital force tester motorized test stands, manual test stands and load cell sensors. "We are excited to offer the most advanced, innovative and easy-to-use line of testing solutions available," said Emerson Leme, head of Metrology Equipment Division at Starrett. "Users across many industries and applications will be impressed with the features, flexibility and modern design of the L1 force measurement platform, which is unprecedented in the industry."

Designed for versatility and ideal for basic tensile and compression testing, the Starrett Series DFC and DFG digital force gages can be used as a fast, convenient, affordable handheld testing solution for basic applications, or via the DFC gage, as a force sensor and controller when used with the FMM Series of motorized stands or the MTL and MTH manual stands.

Starrett innovation is exemplified in the new DFC Series force gage design. The DFC gage can be used as a traditional handheld instrument with a measurement accuracy of better than 0.1 percent. Or, the DFC can be used as a controller on the column of Starrett’s new FMM Series digital test stands. As a controller, the DFC serves as the user interface where users can setup load limit testing, distance limit testing and break testing. The DFC controls the FMM tester’s speed, travel distance and direction. The DFC displays both force and distance results and features Bluetooth, USB and RS-232 for interfacing to external devices including computers, printers, networks and more. The DFC Series is available in eight load capacities from 2 lbf to 550 lbf. All models have a measurement resolution of 10,000:1.

Three new manual testers are also available in the Starrett L1 Line: MTL-110 (110lbf), MTL-330 (330lbf) and the MTH-550 (550lbf). These testers are ideal for applications where occasional testing is performed or where an economical solution is preferred. Combined with a DFC or DFG force gage, the user has an affordable solution that delivers accurate results for tensile or compressive testing. Starrett manual testers can be used vertically or horizontally. Options include a digital scale for precise distance/height measurements.

When more sophisticated and complex testing is required, Starrett also offers a range solutions via the L2, S2, L2 Plus and L3 Systems. The Starrett L1 Force Measurement Line is manufactured in the U.S.A. and is available to order now in several configurations including FMM Series digital force testers in three standard travel and three extended travel versions, 14 digital force gages including eight DFC advanced force controllers and six DFG basic force controllers, eight load cell sensors in the Series BLC and three manually operated force testers including two models in the Series MTL and one model in the Series MTH.