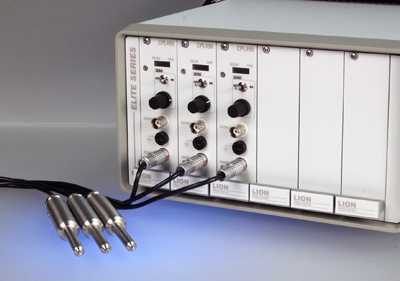 New measurement ranges have been added to Lion Precision's CPL490 Capacitive Displacement Sensor. The precision device measures position/displacement with 50-picometer precision or less. Relative to the noncontact sensor's measurement range, that translates to a resolution value of less then seven parts-per-million even at 15 kHz bandwidth.

"We are now able to measure changes in an object's position when it moves less than the diameter of one of the molecules in the object," says Don Martin, Lion Precision president.

Previous models were capable of similar precision but only when high frequency components were filtered out of the measurement signal. The CPL490 can resolve target position changes of less then 100 picometers while objects are moving at 15 kHz. When bandwidth is increased to 50 kHz, a remarkably high frequency for capacitive sensors, the precision is still less than 0.3 nanometers.

A wide selection of probes and ranges puts more flexibility and capability in the hands of engineers, designers and researchers needing precise measurements of changes in position of a moving object.

"The CPL490 has now opened a viewing window into the dynamic nano world enabling spindle manufacturers and designers to take the next step in precision," according to Martin. Many industries including hard-disk drive, semiconductor and electron microscopy require measurement of position with increasing precision. "Some new technologies can't take the next step until they are given the ability to quantify these tiny movements. We are now able to provide that," adds Martin.

Probes for the CPL490 include internal electronics and are now available with a wider selection of measurement ranges. The probes feature an 8mm-dia. clamping area for probe mounting and are available in four different versions. The options enable users to select the best combination of range, bandwidth and resolution for their application.