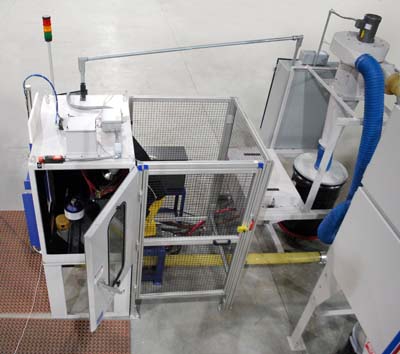 Guyson Corp. has introduced a robotic blasting system based on one of its compact rotary suction-blast cabinets. The new Model RB-RSSA-6 incorporates a Fanuc LR Mate 200iC robot and is for work cell blasting operations, such as blast cleaning, cosmetic finishing and technical surface preparation. The 42-inch wide blast chamber of the RB-RSSA-6 houses a single rotary spindle on which an interchangeable component-holding fixture is mounted. Parts are loaded in the blasting machine through an automatic vertical sliding door that is 18 inches in width. A full-depth hinged door on the side of the cabinet provides access for inspection and maintenance. Including the safety-interlocked perimeter enclosure surrounding the robot, the robotic blast machine is 74 inches tall and 72 inches deep. When the blast cycle is initiated, the load door closes and the component is rotated at controlled and adjustable speed as a single suction-blast gun is directed at target surfaces by the 6-axis robot. Programmed robotic motion of the blasting nozzle ensures that a specific stand-off distance and angle of blast media impingement is constantly maintained, even as the blast gun manipulator follows the contours of complex-shaped components. The robot also directs a blow-off nozzle during the timed air wash cycle that follows media blasting.

The rear of the RB-RSSA-6 robotic blast system is sealed by a custom-tailored skirt made of multilayered laminated fabric. The protective suit fits tightly around the end of the robot arm, yet allows the full range of motion in all axes, as it isolates the precision manipulator from the potentially harsh abrasive environment of the blasting chamber. The system's programmable logic controller (PLC), to which the robot controller is slave, is capable of storing and recalling the automated blasting process routines for up to 100 different components. A custom-designed touch-screen interface allows the human operator to select the program for a particular component and also displays process data monitored by electronic sensors, such as spindle speed, the duration and elapsed time of the blasting cycle and the levels of blast media and contents of the dust collector drum. Prospective users of robotic blasting equipment are encouraged to submit sample components for free laboratory testing and application engineering evaluation at the blast machine builder's factory in northeastern New York.