The various stages of automation collaboration 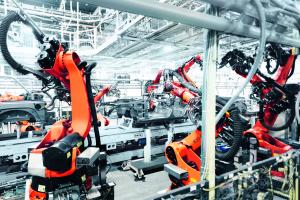 There are no collaborative robots, only robots with collaborative applications. That’s according to Simon Whitton, regional division manager of North America for KUKA Robotics Corp., Shelby Township, Michigan.

He named five stages of collaboration. Stage one is the classic robot application where automation activity takes place behind some type of fence. “The only collaboration that occurs is when somebody opens the door, the robot stops and the person goes to attend to something in the work cell,” Whitton added, estimating that more than 90 percent of robotic applications are stage one.

The second stage is also not designed for human interaction with the robot other than people entering the workspace to retool or remove parts. For example, the robot will slow down or stop depending on the proximity of the person to the robot, but the process can continue if it safe to do so. Contact between the human and robot is not desired or required for the application to work. “A little more collaboration but not that much,” he said.

Stage three involves a process where the robot depends on an operator to manually load and unload parts, and there’s some form of shared workspace. “One requires the other to operate, but at the point where the robot works, there is no human intervention required.”

The types of robots that people consider collaborative appear in stage four, “where this misnomer comes about,” according to Whitton. This stage has applications for force-limiting robots that move slowly and are easily stopped on contact. Although a person and a robot do not work simultaneously on the same part, they share workspace.

That scenario changes in stage five, where a human and a robot work together on the same thing, he said. For example, the robot orients a part while the person polishes it. Again, the robot works slowly and must “sense” when it contacts a human.

“If you need to work quickly, you need some kind of barrier,” Whitton added. “The advantage is the robot can operate very quickly; then, once a human enters the workspace, the robot stops.”

For operating in stages four and five, KUKA offers LRB iiwa, a lightweight robot (leichtbauroboter in German) that serves as an “intelligent industrial work assistant.” The company states that the robot is targeted for delicate assembly work, where safety fences make way for human-robot collaboration in the workspace.

Whitton added that a sixth stage of collaboration is developing. In this stage, a force-limiting robot is mounted on a mobile device for traveling around a workspace. “This opens up a whole new set of applications in logistics or stocking parts or loading parts,” he said. “You don’t have to have adjoining processes physically near each other.”