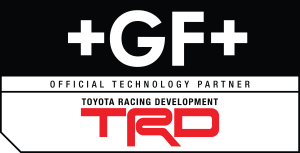 TRD began their initial relationship with GF Machining Solutions in 2014 when they added a fully-automated production cell to their manufacturing facility. Comprised of seven 5-axis machining centers (six MIKRON HPM 800 U HD machines and one MIKRON HPM 1350 U) connected to a shared pallet pool system, the system uses a rail-guided robot to load the machines from more than 80 open pallets along a 32-meter track.

Machining an individual part at TRD can take only a few minutes or in some cases up to 15 hours; with part sizes ranging between 1" and nearly 20" in a single dimension, and tolerances at or below 5µm. Complex contoured surfaces require full simultaneous 5-axis production, which also provides better accessibility and fixturing for other parts. By using the automated cell, TRD is able to reduce component lead times, boost machining capacity and achieve a 22-percent increase in productivity.

“GF Machining Solutions is honored to be an Official Technology Partner for Toyota Racing Development,” says Scott Fosdick, President GF Machining Solutions North America. “We look forward to developing alongside TRD to improve processes and efficiencies for both companies while advancing newer technologies for the future of manufacturing and racing.”

“TRD is very excited to see how this relationship will push the boundaries of our on-track performance,” says Greg Ozmai, Group Vice President of Operations at TRD. “The results of our collaboration with GF Machining Solutions were immediate and have exceeded our expectations. The Mikron cell’s flexibility allows TRD to put over 100 different parts through the cell and the added precision has improved the overall engine performance, which propelled TRD to the winner’s circle in 2017.”