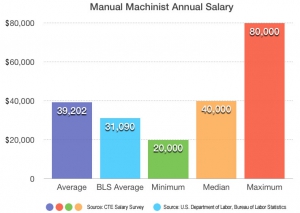 UPDATE (9:21 a.m. CST, Feb. 24, 2015):   Among the 85 respondents to Cutting Tool Engineering magazine's Salary Survey Addendum, the annual average salary for manual machinists stands at $39,340, which represents an average hourly wage of $18.91. Combining the survey addendum results with CTE's 2014 Salary & Benefits Survey, which is based on data collected last fall from 215 respondents, the annual average salary for manual machinists is $39,202, which is about $18.85 an hour.

Though the combined data represents a 40 percent increase in the number of respondents to our original salary survey, the average annual salary for manual machinists is less than two-tenths of 1 percent more than the $29,144 average salary we originally reported in the August 2014 issue.

UPDATE (11 a.m. CST, Feb. 16, 2015):   Based on continuing analysis of new data being collected regarding the wages earned by manufacturing workers throughout the country, the average annual income for manual machinists is at $38,542, which is slightly less than the $39,144 average annual income reported by our 2014 Salary & Benefits Survey. Based on a 52-week year at 40 hours per week, the average incomes reflect an average hourly wage of $18.53 and $18.81, respectively.

Adding the newly collected salary data to the results from Cutting Tool Engineering magazine's 2014 Salary & Benefits Survey, the annual average income for manual machinists remains about the same, dipping slightly to $39,010, which is about $18.76 an hour.

When the new data is added to our 2014 Salary & Benefits Survey, the annual average income for manual machinists remains about the same, rising slightly to $39,197, which is about $18.85 an hour.

Cutting Tool Engineering (CTE) invites you to take a 5-question salary survey to gain some insight into the wage disparity grabbing headlines since the Detroit Free Press gave a face and a name to the affliction touching manufacturing workers nationwide.

James Robertson's story, which initially made nationwide news because of his daily 21-mile walk/bus commute to an injection molding shop in Rochester, Mich., "captivated, inspired and horrified readers," according to a Feb. 10 report by the Detroit Free Press. "The public spontaneously raised more than $350,000 for Robertson's cause  --  all while raining down contempt through social media on his employer ... for paying him just $10.55 per hour."