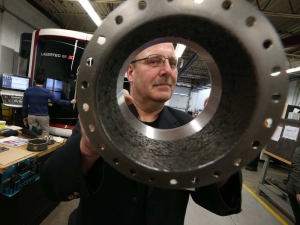 Once word got out that PTooling, a self-described small, family-owned machine shop in Amherstburg, Canada, had added a Lasertec 65 3D laser deposition welding and milling machine to its arsenal, major aerospace manufacturers began knocking on its door.

The Lasertec 65 3D from DMG MORI USA has "opened up the world to us," PTooling President and CEO Marvin Fiebig said in a recent report posted on the Windsor Star website.

“We were just unknown … just a little machine shop, “ Fiebig said. “We were just a family-run business with 20 employees and now all of a sudden we have (aerospace company) Airbus phoning us, we have Pratt and Whitney phoning us.”

And, according to the Windsor Star report, PTooling also has been contacted by Boeing, Virgin Galactic and Space X.