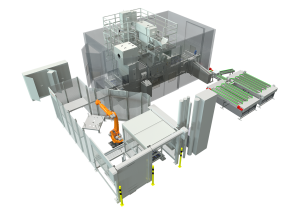 The workpieces in question consist of various toothed components for the transmission in electric vehicles. They must be deburred by shot blasting after undergoing a machining and subsequent heat treatment operation. For this manufacturing stage, the large German manufacturer had to invest in a new shot blasting system.

The customer chose the Rösler equipment in part because of Its experience with a practically identical shot blast machine that has been running at the shop since 2016.

At that time, the OEM purchased the shot blast machine for a similar surface treatment task. In both cases, the customer chose a continuous feed wire mesh belt blast machine with largely automated workpiece handling from the Rösler Oberflächentechnik GmbH. The company preferred the Rösler equipment because of the well-engineered, compact automation concept, the easy maintenance, and sturdy equipment design.

At the start of the deburring operation, the workpieces are manually placed on two storage units, which are part of the workpiece transport system. After an integrated camera system has confirmed the correct transport position, the components are precisely positioned on the wire mesh belt in lots of three and continuously transported through the shot blast machine. Upon completion of the shot-blast process, a powerful blow-off system is completely removing any residual blast media from the work pieces.

In the next step, the now deburred components are transferred onto a buffering station consisting of a conveyor belt. Here, the workpieces are precisely repositioned so that a robot can pick up four pieces at a time, and Rösler Oberflächentechnik GmbH, place them in layers into suitably staged work piece bins. Whenever a layer is complete, the robot picks up an intermediate cardboard sheet and places it in the bin. Completely filled or partially filled bins, in case of a workpiece change, are automatically removed from the robot working area. This allows the operator to safely remove them from the manufacturing cell with a lift cart.

When the workpiece type changes, the operator selects the new type in the HMI. This causes the machine control to empty one of the two storage units of the workpiece transport system so that new parts can be immediately placed on the now empty storage unit.

At the same, the machine control selects the respective shot blast parameters for the new workpiece type. This ensures perfect deburring results and prevents any input errors by the operator.

The shot blasting machine was designed for three-shift operation allowing cycle times of less than eight seconds per workpiece. Equipped with four high-performance blast turbines with an installed power of 11 kW each, the machine provides ample “firepower” to achieve the required deburring results.

The precise placement of the turbines on the blast chamber was determined with special software that allows the simulation of the blast pattern for the entire workpiece range. This ensures that all workpiece sections are reliably deburred within the required cycle time.

To guarantee long uptimes and very little work for maintenance, the turbines are completely made from carbide steel. The same material was utilized for those blast chamber sections exposed to a higher risk of wear.

To facilitate maintenance and minimize non-productive idle times, these sections are lined with replaceable carbide steel plates. The turbine type and blast chamber design of the existing and new shot blast machines are practically identical. This greatly facilitates the maintenance and supply of spare parts by the internal maintenance department.