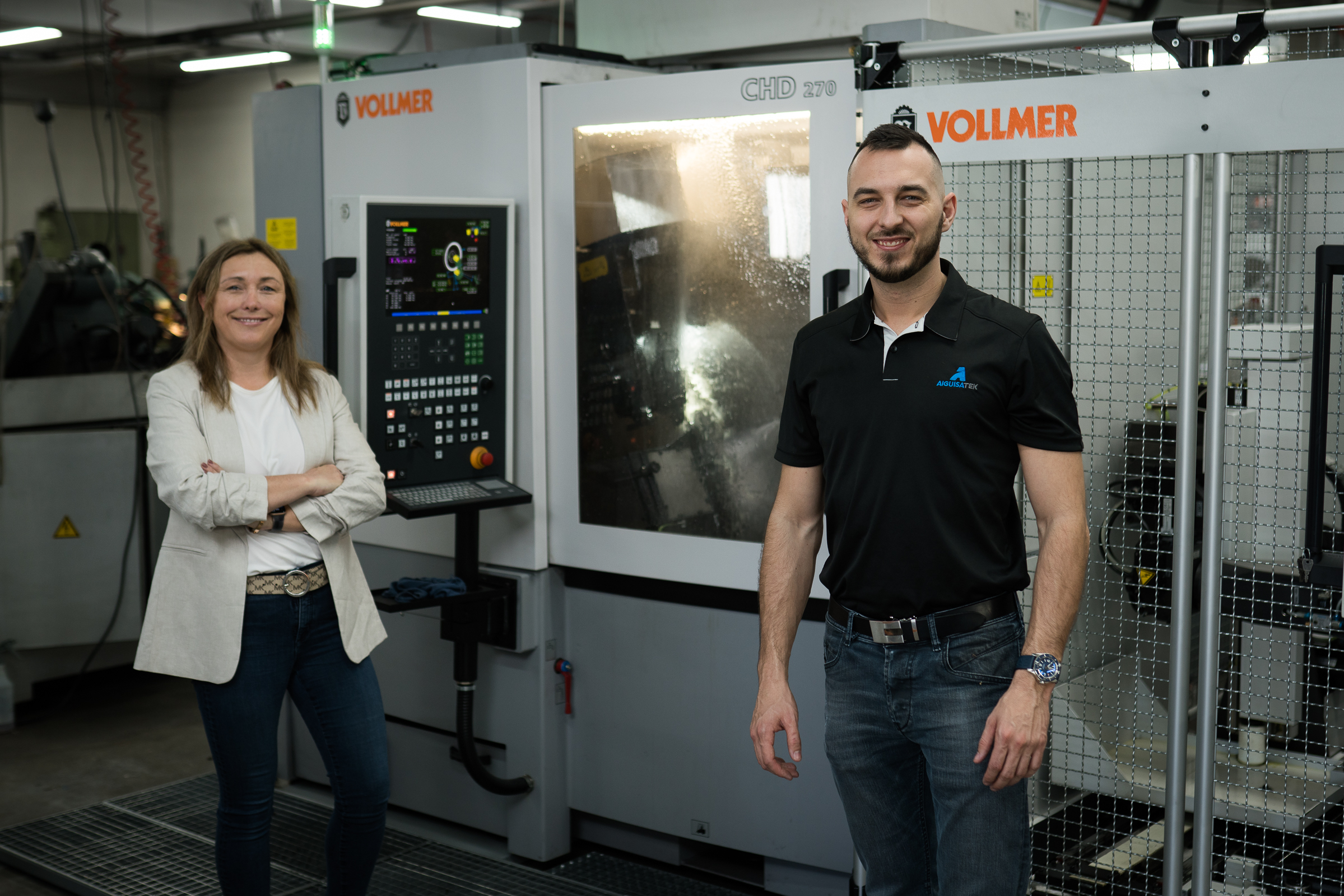 The global pandemic has impacted businesses around the world, but for Aiguisatek, a Canada-based sharpening service, the impact was compounded by stringent local regulation in the Quebec province that all but shut down manufacturing in the area.

Automation technology has helped this Delson, Canada-based company overcome these obstacles. The company invested in a Vollmer CHD 270 8-axis TCT circular saw blade sharpening machine, combining it with the Vollmer ND250 automation station that enabled the company to run unmanned production throughout the pandemic.

Since its inception, the company has grown exponentially and expanded its product and service offering – something that has been supported down the years by six VOLLMER Akemat circular saw blade sharpening machines. In 2011, the daughter and grandson of company founder Conrad Goulet took over the business. Lisa Goulet and Jonathan Riberdy have since driven the business forward by moving to a new 14,000sq/ft facility, investing heavily in new machine tools and implementing a strategy to diversify into PCD cutting tools.

In 2013, the company realized its saw blade servicing department was reliant on ageing Akemat machines that required significant labor resource to keep up with its weekly demand of 350-400 saw blades. This was compounded by the increasing requirement for 80-, 100- and 125-mm split scoring saws that had to be manually processed.

“The demand for split scoring saws was increasing and each blade would take up to 15 minutes to process manually,” said Riberdy. “Buying the Vollmer CP200, we reduced production time to 3-4 minutes.” 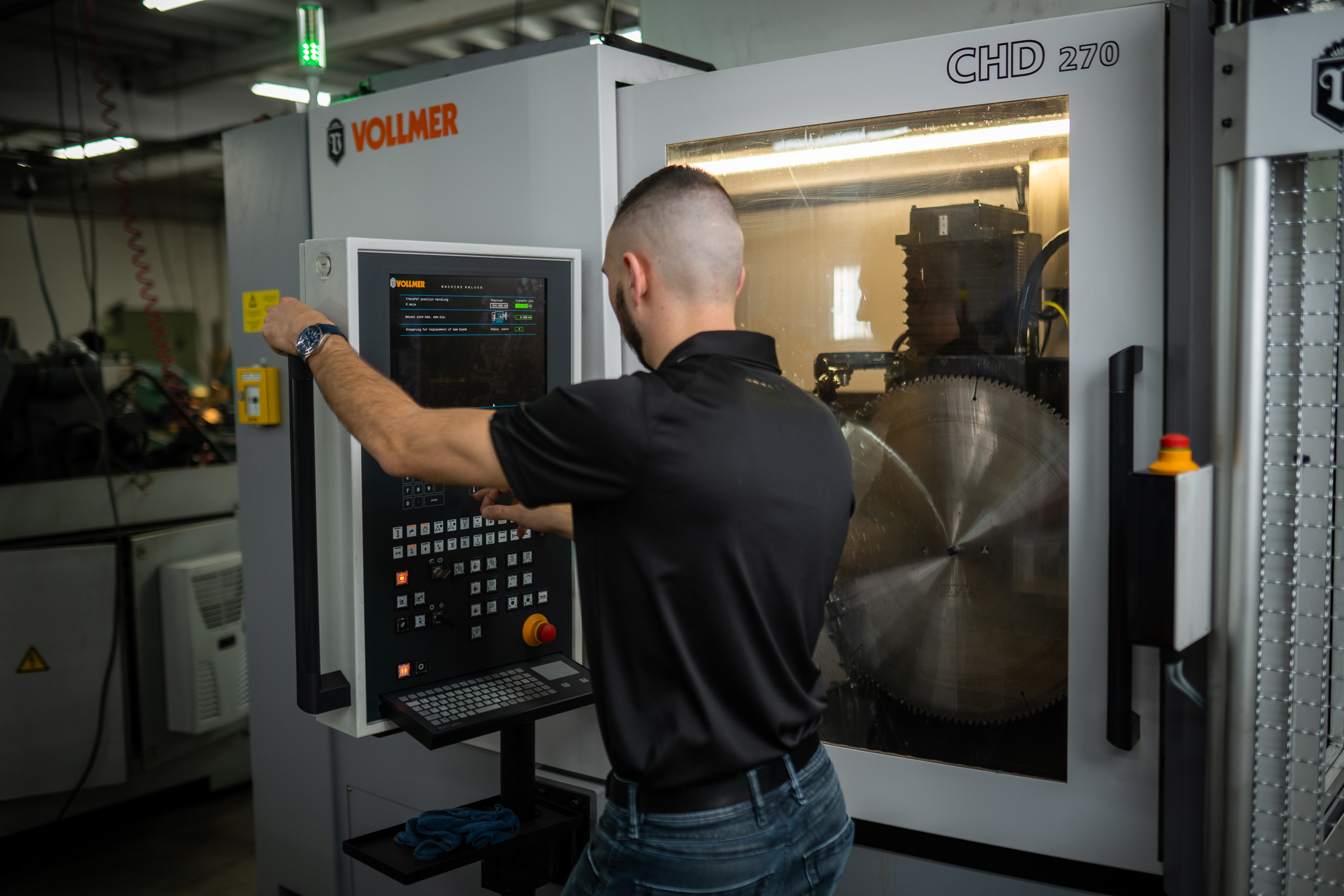 In addition, the CP200 also improved re-grinding and service quality, throughput and allowed the company to produce blades with more complex geometries.”

“Back in 2013, we had several saw blades that were problematic,” Riberdy said. “These saws had to be subcontracted out for re-grinding. Just one example was a 10” diameter saw blade with a fine pitch of 130 teeth. The CP200 enabled us to bring challenging blades in-house and eliminate subcontract costs and the reliance on third-party suppliers. The CNC control unit and the software on the CP200 also made the set-up and programming extremely quick and efficient.”

In 2015 Aiguisatek expanded into PCD cutting tools, increasing its offering and market share with existing customers as well as attracting new clients. Since this diversification, Aiguisatek has witnessed 25% year on year growth, expanding beyond its local customer base to support clients across the Quebec and Ontario areas. Of course, such aggressive growth not just in PCD tooling but also TCT saw blades required additional investment. So, in 2019 the company acquired a Vollmer CHD270 8-axis tooth top and face grinding machine with the Vollmer ND250 automation solution as part of a $1.5-million investment program.

“PCD tooling has been a game-changer for us and it has accelerated growth,” said Goulet. “In a short time, the breakdown of our products is now 35% PCD and 65% carbide tooling. Simultaneously, our TCT saw blade department has grown by an average of 15% year-on-year and we are now servicing over 1,000 saw blades a week.”

With production requirements increasing from 350 to 1,000 blades a week, the CHD270 was a necessity. The CHD270 can process saw blades from 3.15” to 33” diameter whilst the ND250 4-axis double gripper automation cell has five carriages to accommodate up to 450 saw blades or a maximum load of 1,500kg.

“Saw servicing changed overnight,” said Riberdy. “We went from two operators running seven machines non-stop to one operator working across the CHD270, the CP200 and one or two Akemat machines. With the Vollmer CHD270, our operator can spend two hours loading and unloading around 150 saws and then setting the machine to run for 24 hours unmanned – giving the operator time and capacity to work on other machines.”

“The Vollmer CHD270 processes one saw at a time, so it’s not as fast as two men running seven machines simultaneously all day long. However, we used to have two men working 10 hours a day to produce 150 saws on seven machines – now the VOLLMER CHD270+ND250 runs 24 hours a day 6 days a week, giving us the same weekly production capacity from one unmanned machine as we used to get from two men and seven machines. Instead of running seven machines simultaneously for 10 hours, the CHD270 reaches the same daily output by running through the night unattended. Not only does the VOLLMER make the time and output up through weeknights, but it runs unmanned over the weekend too. Now, we run about 10-15% of our blades through the Akemat machines for a couple of hours a day with the CHD270 doing most of the saws.”

Like the CP200, the CHD270 has a user-friendly interface that simplifies programming with almost limitless tooth geometry opportunities. As Jonathan states: “Our price point may be a little more expensive than our rivals, but we deliver quantifiable savings with test reports. Our expert engineers will consult with customers on applications and material types to maximize performance, precision and reduce costs. The ability to easily create a variety of geometries with unsurpassed quality on the CP200 and CHD270 supports this service.”

By creating test reports for clients, Aiguisatek can follow the life cycle of saw blades from new through to the final re-grind before blade replacement. Compared to its rivals, Aiguisatek can re-sharpen blades up to 20 to 25 times before renewing, and the saw blades can achieve up to 50% greater tool life and they can increase cutting meters by more than 30% per re-grind.

“With the Vollmers we know exactly what we are taking off each tip every time we do a re-grind. There is no inconsistency, and this gives the blades a much longer tool life. For new customers that query our price point, we show them the VOLLMER machines their blades are being made on – and that fills them with confidence in our quality.”