In the film, Malmsteen plays the guitar in front of an excited crowd in a rock club outside Miami—after which he does his very best to destroy it.

Sandvik engineered the smash-proof guitar to demonstrate how advanced, precise and sustainable the company’s techniques are. 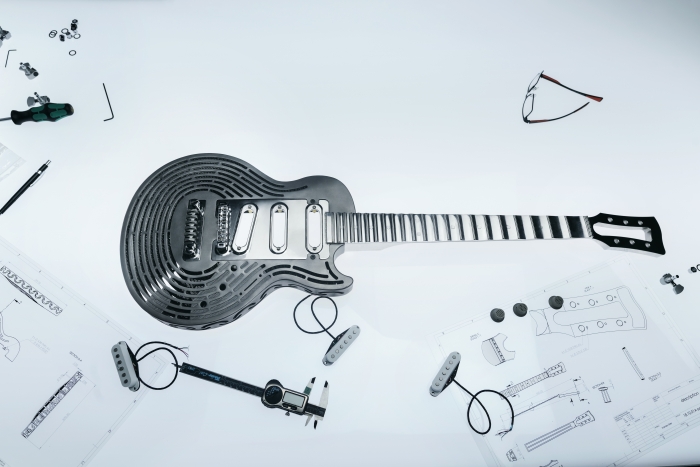 “We don’t make products for consumers, so people don’t realize how far in the forefront our methods are,” says Klas Forsström, president of Sandvik Machining Solutions. “Creating a smash-proof guitar for a demanding musician like Malmsteen highlights the capabilities we bring to all complex manufacturing challenges.”

Malmsteen, named one of the 10 greatest electric guitar players in the world by TIME Magazine, is known for his virtuoso performances—as well as the fury he unleashes on his guitars. A master of neo-classical heavy metal, Malmsteen has produced 30 albums and has been smashing guitars onstage for over 30 years.

“This guitar is a beast! Sandvik is obviously on top of their game. They put the work in, they do their hours, I can relate to that,” Malmsteen said. “The result is amazing. I gave everything I had, but it was impossible to smash.”

“We’ve had to innovate from the top down. There’s not a single part of this guitar that has been made before. It’s a piece of art, really,” explains Holt. “The weak point in any guitar is where the neck joins the body. Sandvik solved the problem by milling the neck and the main hub of the body as one piece. You could use the guitar as a hammer and it wouldn’t break.”

Several different divisions of Sandvik collaborated to make the instrument. For the guitar’s 3D printed body, Sandvik relied on its expertise in metal powder and additive manufacturing. Lasers traced a design in beds of fine titanium powder, fusing layers of material one on top of the other. The layers, each thinner than a human hair, built up to make the body of the guitar.

“Additive manufacturing allows us to build highly complex designs in small production runs,” said Amelie Norrby, additive manufacturing engineer at Sandvik. “It lets us create lighter, stronger and more flexible components with internal structures that would be impossible to mill traditionally. And it is more sustainable because you only use the material you need for the component, minimizing waste.”

The guitar’s neck and fretboard were machined by Sandvik Coromant in one machine from a solid block of recycled stainless steel.

“Precision was critical,” said Henrik Loikkanen, machining process developer at Sandvik Coromant. “Our software is built on years of experience, giving tool and the cutting data recommendations that helped us mill the fretboard down to a challenging thickness of one millimetre in places.”

The next challenge was to strengthen the fret and neck as they extended into the guitar’s body. That solution took the form of a new, super-light lattice structure that was sandwiched between the guitar’s neck and fretboard. Made from hyper-duplex steel, a Sandvik innovation, the lattice structure is reportedly the strongest in the world for a given weight.

“Collaborating like this, working together to solve even more complex problems is key for the future,” said Tomas Forsman, product development specialist at Sandvik. “Our customers’ challenges continue to grow more and more complex. We need to bring our expertise to work hand-in-hand with our partners and customers to invent new ways of meeting those challenges.”

Watch how the world’s first smash-proof guitar was made.