On Robot introduces grippers for cobots 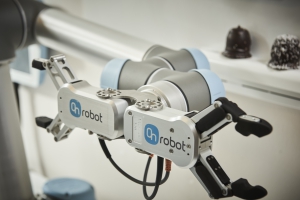 On Robot ApS, a Danish manufacturer of grippers for collaborative robots (cobots) that was founded in 2014, is introducing its technology to the North American market and has appointed Gary Eliasson as its general manager for North America. He will be based in Charlotte, N.C. “My goal is to set up a North American distribution channel,” he said.

Eliasson explained that one of the company’s founders, Bilge Jacob Christiansen, was formerly at Denmark-headquartered cobot manufacturer Universal Robots A/S, and he took advantage of his understanding of the internal wiring and communication structure of UR’s robots to develop the RG2 grippers, which are available in single- and dual-gripper versions. “The big advantage of the gripper is it directly plugs into the I/O port at the end of the robot,” Eliasson said, “so all the wires that communicate to and from the gripper are internal to the robot.”

By not having external wires, end users can benefit from robots that have infinite rotation of the last wrist joint, such as Universal’s UR3, Eliasson noted. External wires or hoses would get tangled up with a robot when there was a need for constant rotation, such as when using the robot to screw something into place.

Currently, UR is the only robot manufacturer On Robot is working with, but part of the product’s roadmap is to modify the grippers so they can be used with cobots from other manufacturers. Eliasson said the company is not planning on making grippers for conventional robots.

He added that collaborative means three things to the company. The robot must safely work side by side with people, be cost-effective and be simple to use, including programming. The grippers come with a USB thumb drive that plugs into a robot teach pendant and automatically downloads the required software.