Mike Gampetro has a great job. As a CNC programmer for the Proposal Engineering Dept. at Ingersoll Cutting Tools, Rockford, Illinois, he spends his days improving customers’ machining processes. It could be an Inconel part where Gampetro suggests ways to increase tool life, or it could be a long-runner where every second of cycle time counts. Either way, it’s his job to generate ideas his customers can then use to produce more parts in less time, and hopefully reduce their operating costs along the way. 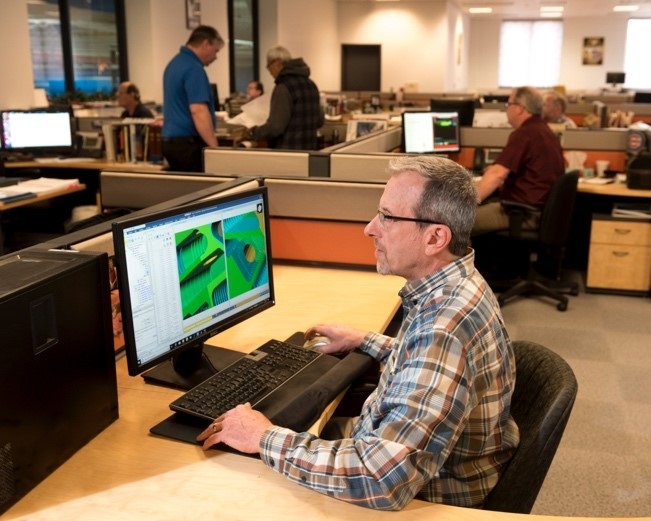 Brother, can you lend a hand?

Whatever the case, he and Ingersoll are available to help machine shops of all sizes, and one of the tools they use to provide this no-cost assistance is VERICUT toolpath simulation software from Irvine, California-based CGTech. “In most cases, a customer sends me their VERICUT file and hopefully the NC program together with a tool list,” he says. “I’ll look at the existing metal-removal rate, the cycle time, and make recommendations on how they can improve the process.”

Quite often, Gampetro will need to reprogram the job from scratch. He’ll then run a comparison between his revised cycle time against the legacy program, using VERICUT to validate that his recommendations are solid. When done, he’ll send the customer a revised tooling list along with some screenshots of the process, and if the customer has VERICUT—which most do, Gampetro says—he’ll include that file in the package as well.

The results are well worth the effort. Gampetro is able to reduce most cycle times by at least 15%, with some enjoying a 50% or greater improvement. Although he’s unable to share any customer names, he noted that a well-known manufacturer of aerostructures in the Seattle area was one of the latter examples, and has since become a repeat visitor to Ingersoll’s optimization initiative as a result. “Some of our customers are producing very large, complex parts with cycle times of 40 hours or more,” he says. “Even a modest improvement pays huge dividends in these instances.” 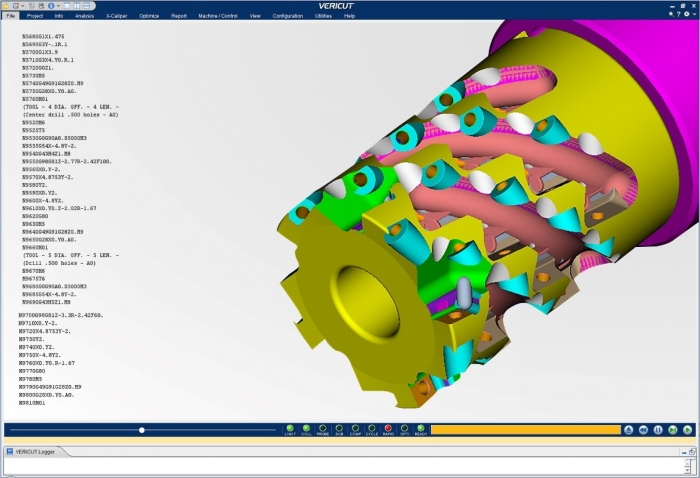 Accurate simulation of machining processes is made possible through realistic 3D modeling of all cutting tools, workholding and CNC equipment.

Gampetro has been in his current programming position for over two years, but his experience with VERICUT goes back far longer. That’s because he started out as a production programmer for Ingersoll in 1991, and the company has been using the toolpath simulation software in its own shop for the past two decades.

“We have extensive capabilities here and machine a wide range of complex geometries, everything from indexable turning and milling tools to special purpose cutters for automotive transfer lines,” he says. “Every single job is run through VERICUT before being released to the shop floor, to verify there won’t be a crash and that we have the best cycle time possible.”

Ingersoll also designs and manufactures custom cutting tools—lots of them—which Gampetro has recommended on more than one occasion. In one recent example, he couldn’t understand why one of his customers was using a ball-nosed endmill to surface the bottom of a deep slot. After speaking to the programmer there, Gampetro learned there wasn’t a standard slotting cutter available that could do the job, so the customer made do with what was on hand.

“All they needed was another half inch of reach, so we designed a special tool,” he says. “It made a huge difference on the cycle time, not to mention much better tool life.” 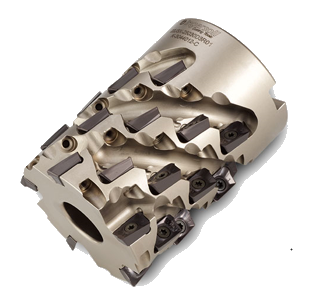 Gampetro says this situation is not unusual. Despite the best of intentions, machine shop personnel everywhere are pushed to get jobs running as quickly as possible, and that shortcuts are sometimes taken. This is especially true in job shops, where optimization frequently plays second fiddle to machine uptime. “They’ll run into a hiccup, do a workaround to solve it, and then all of a sudden what should have been a really good NC program ends up taking longer than necessary.”

Nor do customers always like what Gampetro tells them, he notes. One shop came to him with an NC program for a 15-5PH stainless steel part that made extensive use of trochoidal milling strategies. When he reprogrammed the job to use plunge milling for a pocket roughing routine, the client balked.

“They said plunge milling is old school, and even after I showed them the simulation—which reduced the cycle time by 40 minutes—they insisted that trochoidal toolpaths are more efficient,” he says. “So we ordered a block of 15-5PH stainless, set it up at our Tech Center, and invited them to watch. Fortunately, most of our customers don’t need that level of proof, and become believers after seeing the VERICUT simulation.”

Sometimes, there’s no problem with a job at all, only opportunities to leverage newer cutting tool technology. When a machine shop has been running the same job or same material for years, it’s easy to become complacent, and it’s only by having a fresh set of eyes evaluate a machining process that higher-performing strategies can be brought to bear.

Gampetro is quick to point out that this isn’t some backwards sales pitch, designed to sell more cutting tools. Of course he recommends Ingersoll cutting tools where appropriate, and as already mentioned, custom-designed cutters often yield significant benefits. But if a customer’s legacy tooling gets the job done, by all means they should stick with what works. His job is to review part programs, evaluate where improvements can be made, simulate the changes in VERICUT, and pass his suggestions on to the end users.

“I’ve found many times that people will program a part, prove out the process, and no one will touch it for years and years,” he says. “It’s so easy to go back in and reprogram something and show them where they can improve. I don’t even push the tools as hard as I could, and use conservative feeds and speeds so that the customer can make additional improvements once they get the job back on their own machine. Even so, most of our customers are very happy when they leave here. VERICUT is a big part of that.”