Aircraft Tooling Inc., a Dallas-based repair center for the aviation industry, was surprised to find that Universal Robots could withstand the high temperatures and harsh environment while performing metal powder and plasma spray processes. The UR “cobots” have been in operation for 3 years without breakdown or service requirements. 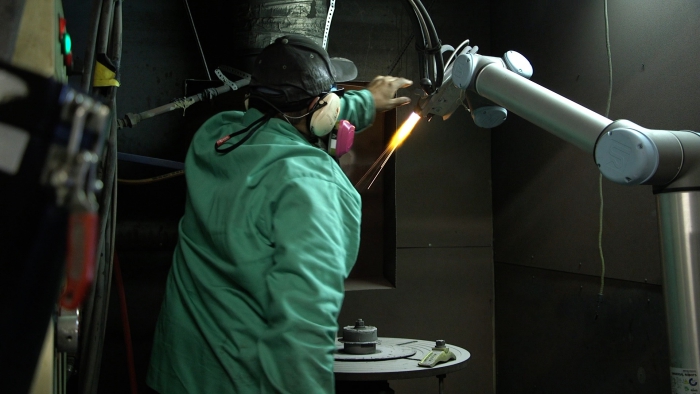 Juan Puente, thermal spray supervisor at Aircraft Tooling Inc., turns the HVOF flame on and then leaves the booth as the UR10 robot performs the spray process. Photos courtesy of Universal Robots

“It simply looked too clean.” That was Juan Puente’s first thought as he researched the robot arms from Universal Robots. Puente is the thermal spray supervisor at Aircraft Tooling Inc. (ATI) in Dallas. The company was looking into automating repair tasks involving new HVOF (high-velocity oxygen fuel) and plasma spray on parts as required within the aviation industry. Puente had initially been recommended to purchase traditional industrial robots but what he found did not meet ATI’s needs. “The cost was outrageous, the cast iron models we looked at were too bulky, we could not easily move them between cells, they were hard to program, and all required safety guarding, which would not work in our small spray cells,” said the supervisor, who stumbled upon Universal Robots in a YouTube video.

“The UR10 robot had the required reach for the spray distance and the cost was about half of everything else we looked at. It was very user-friendly and portable. Because of its collaborative safety features we did not need to fence it in,” Puente said. The UR robots are classified as “collaborative” due to their built-in safety system that makes the robot arm automatically stop operating if it encounters objects or people within its route. 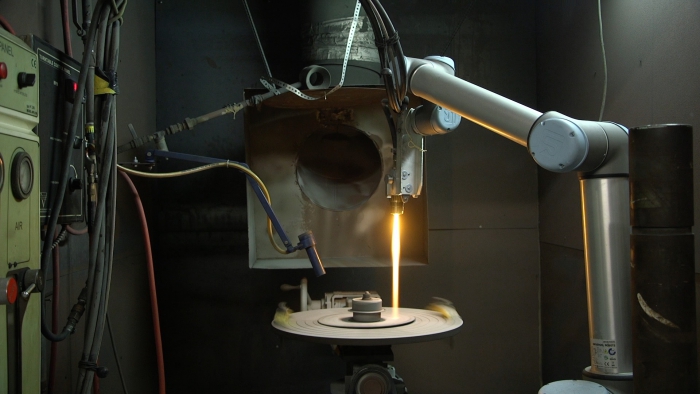 High-velocity oxygen fuel coating is a thermal spray coating process used to improve or restore a component’s surface properties or dimensions, extending equipment life by significantly increasing erosion and wear resistance. The spraying of parts usually takes 3 to 4 hours, with spraying in 1- to 2-minute intervals followed by a 2-minute cool down period with cold air provided by a pneumatic cooler (the blue pipe on the left).

Didn’t believe it at first
Though Puente readily admits that the UR10 “won their hearts” there was significant hesitation at ATI as to whether the robot would operate reliably in the spray booth’s extremely hot and dusty environment. “We were very surprised. I actually thought the robot wouldn’t stand it. Some of these powder coatings are tungsten carbide, which is a hard metal coating. If it seeps into the bearings of the robot, we were afraid it would destroy them,” he explained.

ATI opened up the seals on the UR10 and found the bearings intact. “There were no particles in there, 3 years of operation, it doesn’t show,” said Puente, adding that recoil from the spray gun was another concern. “We were nervous that the recoil would trip the robot or interfere with the servo capabilities. We went as high as the pressures would take to make it bounce, and it wouldn’t do it. The robot simply stayed in position.” 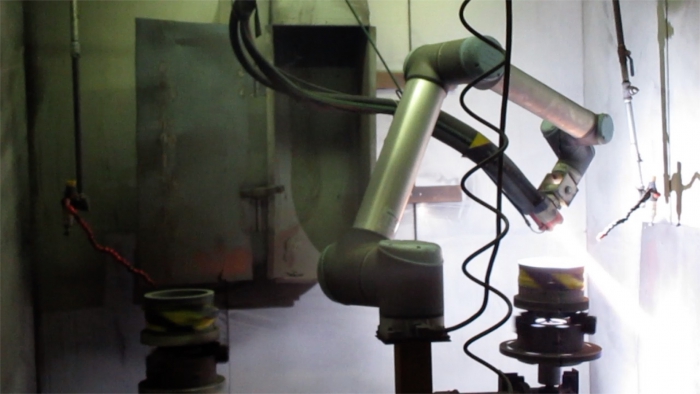 ATI’s second UR10 robot handles the plasma spray which is a hotter flame delivering a denser coating.

Nick Armenta, automation engineer with Olympus Controls, the UR robot distributor working with ATI, explains that the company’s experience with the robot’s durability is common. “We very often see the robots operate in harsh environments, taking over jobs that humans don’t want to perform,” Armenta said. “Many think of cobots as being fragile but the opposite is true, this is an extremely durable robot; it’s sealed against dust, rated for high temperatures, and works just as well in extreme environments as in a cleanroom.” 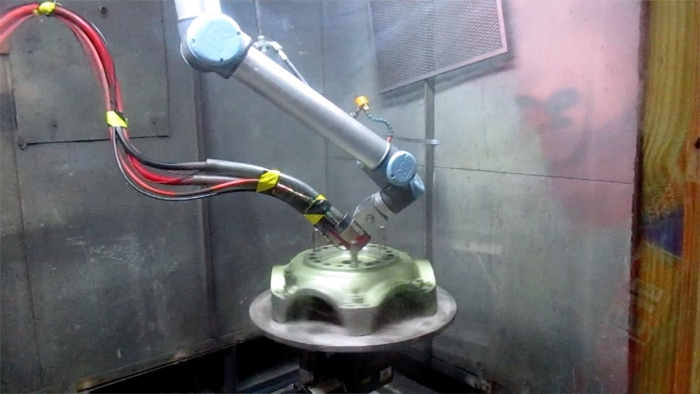 ATI chose the UR10 robot because of its 51.2 in reach which enabled them to hang it upside down in the spray booth.

No preventive maintenance or service required
ATI was also surprised to find that no preventive maintenance is required with the UR robots. “All we do is dust the robot arm off and keep on going,” said Puente, adding that he did not have to pay for a licensing or service agreement. “That was really unusual compared to other solutions we looked at. With the UR robot, everything was included in the purchase price.”

Armenta explained that service calls with the UR robots are not typical. “We do have to make them occasionally, and that is something we provide free of charge. If there is any kind of issue with the robot and it’s under warranty, we can get a part the next day, if we don’t have it in stock,” he said, recalling how his company has been able to get customers’ robots up and running again the same day by helping them exchange joints in the robot arms. 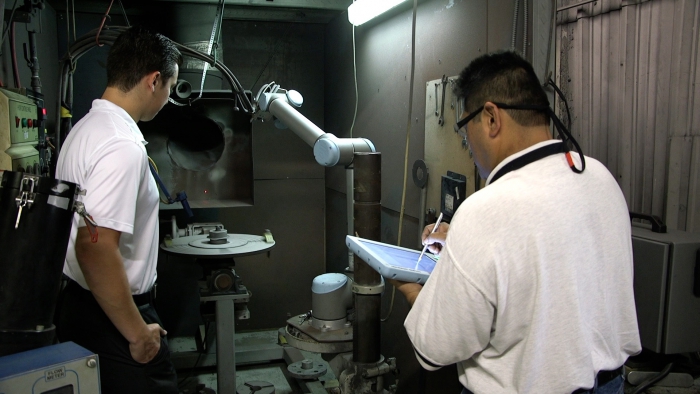 Inverted installation
The UR10 robot chosen by ATI is the largest of the three collaborative robot models Universal Robots offers: UR3, UR5 and UR10. The cobots are named after their payload in kilos and span in reach from 19.7" to 51.2". “We chose the UR10 because of its length, being able to hang it upside down, walk underneath it, keeping the floor clear of anything, was always an advantage to us,” Puente said. ATI has two UR10 robots in operation with a third being installed. The robots’ payload and speed (39.4 in./sec.) was more than sufficient for ATI. “Our spray guns are not that heavy, so payload was not an issue. Most of the speed comes from our turntables making sure that the coating is being applied at a certain velocity,” Puente said. 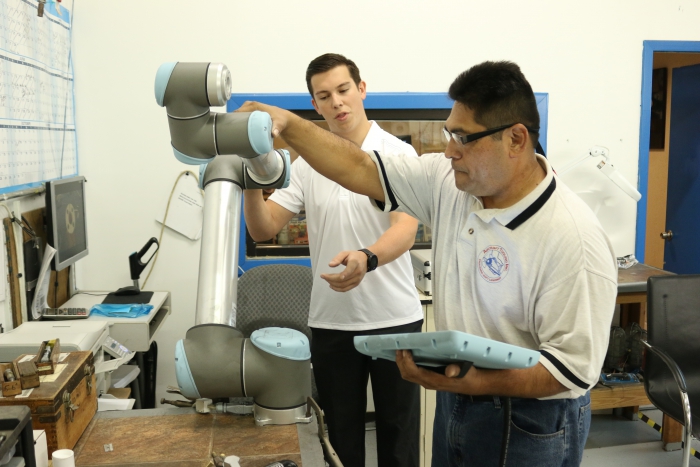 The UR robots can be programmed either through the arrow keys on the robot’s touch screen or by using the “teach method”, allowing the user to simply grab the robot arm and move it through way points.

It only took the ATI team about 4 hours to unpack the robot, get it going and programmed. “It was a very simply, user-friendly process as opposed to other robots with a much more complex, multi-step programming interface,” said the ATI supervisor, who also received a day of free training from Olympus Controls. Programming the UR10’s spray path was done using the “teach method” that allows the user to simply grab the robot arm and move it through waypoints inserted directly on the robot’s touch screen.

“We used a red laser to indicate exactly where we wanted to robot to move, once the waypoints were set, we just hit “play” and the robot moves through that trajectory,” said Puente, who looks forward to adding more complex application tasks next. “We’re looking into adding a vision camera so we can have the robot perform quality inspection of coated parts, locating areas that needs an extra coating. There are so many things we can do with these robots, that we have only started to explore.”