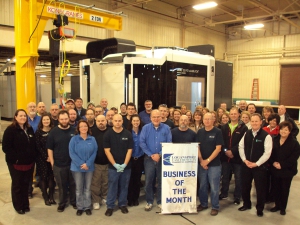 LMC Workholding, which opened for business as the Logansport Machine Company, Logansport, Ind., in 1916, is celebrating its 100th anniversary this year by highlighting the company's continuing expansion.

"We’ve been the name to know in workholding since 1916, and we’re expanding and growing to continue to meet the demand of our customers and the industry," said LMC Workholding President and CEO Jay Duerr in a recent company news release. "We’re proud to have made it to 100 years in business and we’re looking forward to serving our customers for many more years."

In 2015, according to the news release, LMC added a new Automated Turning Cell. The Mazak MY350 and Fanuc Automation R2000-265kg turning cell and robot loads parts weighing up to 350 lbs. into the CNC lathe for machining, removes them and places completed parts back on the loading pallet, a job previously done manually. The automated turning cell allows one operator to run up to four lathes with the help of the robot.

And over the last 3 years, LMC has completed $4 million in expansions, beginning with a large expansion in 2013 at its Logansport facility that involved all green lighting, office renovations and other plant improvements. Plus, several new machines were added, including an expandable six-pallet horizontal machining center, several vertical machining centers, lathes and grinders. The machines improved LMC’s existing capabilities and were used to meet growing demands for products and services, such as larger products and specialty products.

Dennis, who served as electronic media editor at Cutting Tool Engineering from January 2007 through May 2018, is now the owner and publisher of the magazine and CTE Publications Inc. Dennis holds a bachelor’s degree in journalism from Northern Illinois University, and has more than 38 years of daily newspaper and trade journalism experience.