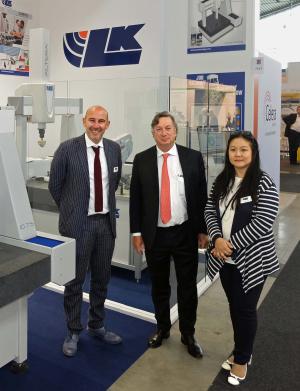 At the Control 2019 exhibition in Stuttgart, Germany, British coordinate measuring machine (CMM) manufacturer LK Metrology celebrated its first year of trading as a stand-alone company again, following its purchase at the end of March 2018 from Nikon Metrology by Angelo Muscarella, owner of Italian firm ASF Metrology. The last time LK was independently owned was prior to its takeover by former holding group Metris at the beginning of 2006.

During the show Muscarella said, "We are delighted to complete our first year so successfully, during which we made a profit despite the expense necessarily incurred in transferring ownership of the company, which included opening a new office in Shanghai. We have already launched a packaged version of our Altera CMM with Renishaw REVO-2 probe, the SCANtek 5, and at the Control exhibition we are showing a brand-new product, the AlteraC 10.7.5, which is the first of three sizes planned.”

Muscarella adds, "It will be supplied with our CAMIO programming, analysis and reporting software plus Renishaw indexing head and touch probe, which can be exchanged for a laser scanner. The machine lowers the price of entry to LK CMM multisensor inspection technology and will be officially launched later this year."

In 2018, LK celebrated its 55th anniversary as a global leader in the metrology industry. It is the longest established CMM manufacturer and its name is linked to numerous innovations, such as the ceramic bridge design, air bearing and granite guideways for stability and stiffness, carbon fibre composite spindles, and horizontal-spindle coordinate measuring. The company worked in partnership with Rolls-Royce to develop Renishaw’s first touch trigger probe for use on a CMM. LK's brand recognition is strong, especially in the automotive, aerospace, medical and electronics sectors.