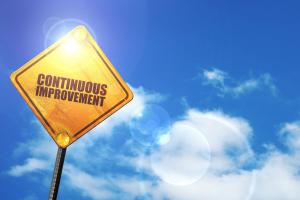 Continuous learning, continuous improvement, continuous generation of ideas—they’re all important things. I would like to think they’re especially important to manufacturers but am struggling to come up with a specific reason. Every business, from floral arrangers to drywallers, must continually adapt and evolve or face eventual corporate death.

Perhaps the reason continuous learning and improvement are so relevant to manufacturing, which in this context means machining, is that our industry is one of the fastest changing in terms of technology. Each year, machine tools become a little faster, a little more accurate. Software grows more capable, workholding a bit more clever, and cutting tools in particular sprout new coatings, substrates and geometries seemingly every day.

That’s what I want to talk about. I interview dozens of people each month for my job. Some are new. Some I’ve spoken to so many times that they’ve become like old friends, even though I’d be hard-pressed to identify them in a crowded room. (I was going to say police lineup but would like to remain on good terms.)

Many are cutting tool salespeople. You might have guessed that based on the cover of the magazine. What’s most interesting to me is how often I hear “No one pushes their cutters hard enough,” “Our customers still buy a lot of HSS drills and endmills” and “They think they’re feeding at 300 ipm, but because the machine can go only half that, the tool rubs and they end up with premature failure.”

I just heard that last line during a discussion on high-feed milling. I’m not going into more about it now except to say that it made me think how the basics of manufacturing competitiveness are a little challenging for some. So too is the willingness to adopt new ideas. Hence the theme of this blog post.

No one is saying machinists aren’t inventive, clever people. This is just a reminder that it’s easy to get stuck in a rut. If your shop isn’t reaching out for advice from the experts I speak with on a weekly and sometimes daily basis, you’re missing out on the chance for significant process improvements. And if you’re still doing things like you were 20 or even 10 years ago, you’re not being a good competitor.

Maybe you can’t afford a new machine tool, so you think that none of this advanced cutting tool technology is for you. Maybe the thought of a $400 solid-carbide endmill is enough to keep you awake at night—what happens if the tool breaks? Or maybe you think there’s no reason to reduce cycle time or improve part quality because there’s no sales backlog and the parts are already good enough.

But consider this: Maybe the failure to be all that you can be is the reason there is no backlog and why the budget for a new machine isn’t there. Yes, salespeople can be pushy. Testing new cutting tools is time-consuming, as is adopting new programming strategies. But unless you’re willing to bring your shop close to the bleeding edge and hold it there—well, you might not have a shop to worry about after a while. So pick up the phone or send an email, and relearn your feeds and speeds. American manufacturing depends on it.