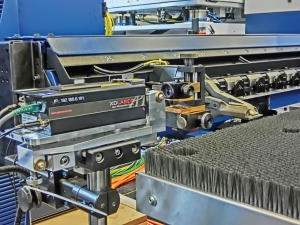 When Trumpf saw API’s XD Laser at a trade show, the manufacturer of machine tools, laser technology, electronics and medical technology immediately recognized that it could measure the three degrees of freedom (DoF) needed for production of its TruMatic 7000 punch laser machine in a single measurement process. A subsequent demo at Trumpf’s factory in Ditzingen, Germany, however, revealed more benefits than Trumpf was anticipating. The XD Laser’s interferometer and small size made it well-suited for the TruMatic 7000 punch laser machine, resulting in:

The Trumpf TruMatic 7000 punch laser machine processes steel plates that weigh nearly 400 Kg throughout the apparatus in an apparently seamless manner. One incorrect position in the punching sequence and the entire plate becomes scrap. Maintaining accuracy is vital, yet the process used to be complicated and time-consuming. The crossbeam extends more than 6 m. The tolerances required in measurements on the crossbeam are less than one-hundredth of a millimeter. The process required a combination of different measuring instruments and setups.

The XD Laser’s interferometer solved all of those problems. The system provided all three degrees of freedom in just one measurement, was easier to handle than Trumpf’s other measurement tools, and was able to accommodate the reflector in the measurement area thanks to its smaller size. An onsite demo revealed that the laser could also cover the full length of the crossbeam mainly because it no longer needed beam splitters and considerably longer measurement distances could be taken. The previous process needed three setups, increasing downtime for the machine and the number of transfer points that can lead to errors.

After seeing the XD Laser, Trumpf added the interferometer to its development, assembly, service and trial departments, as well as the final assembly and service/technical customer support departments. The support department has begun taking the XD Laser to customer sites to assist in onsite calibration. And the development and trials departments have taken the further step of automating the crossbeam measuring process by programming the laser to take two measurements, analyze the results and display them graphically. The user is guided through the entire process step by step. This automation also considerably simplifies the overall process.

“The main reason for our decision to acquire new systems was certainly the ability to measure all three degrees of freedom in a single pass,” says Trumpf's Michael Theurer. “The benefits aren’t limited to series production. Even when on-site with a customer, the new measurement process provides detailed statements about the structure, the alignment and the straightness in the Y and Z axes after only two hours, and we can provide all the data in a detailed report.”

The API XD Laser has dramatically reduced inspection and alignment times at Trumpf while improving accuracies and reducing the potential for human error.