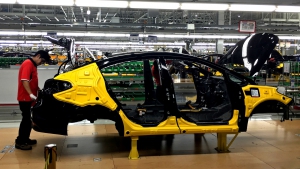 “Mexico is in the throes of a manufacturing boom, ” writes Natalie Kittroeff in the L.A. Times:

Exports from Mexican factories have jumped 13% since 2012. The country already ranks as the seventh-largest producer of cars in the world, and Chrysler, Honda and Volkswagen have major operations there. Over the next five years, another wave of big automakers, including Ford, Audi and Toyota, plan to bring new plants online. And it's not just cars. ...  In the process, workers ... are being lifted into the middle class by the thousands.

“But despite what you might have heard on the presidential campaign trail, Mexico’s manufacturing surge has not been an unalloyed disaster for American workers,” she argues. “U.S. manufacturing production, it turns out, is rising as well. ... The bottom line, say economists and company executives, is that what’s good for Mexico’s factory workers is good for some U.S. workers too.”