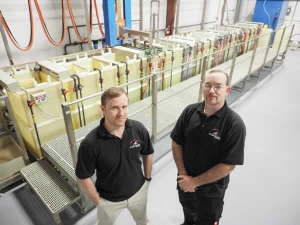 The new facility, which is expected to create up to 29 jobs over the next 3 years, is a direct response to increased demand from North American customers, according to a Hardide news release issued Jan. 7. Hardide reported that sales to the U.S. and Canada more than doubled during 2015.

The new 26,000-square-foot facility in Virginia will service existing and new customers for the company’s patented range of hard wearing tungsten carbide coatings in the oil and gas, and flow control markets. In addition, the company plans to expand into the aerospace and advanced engineering sectors, and develop applications for its newly patented coating for diamonds.

"Production for North American customers, currently being carried out in the U.K., will be gradually transferred to Virginia on a case-by-case, phased basis, taking load and capacity of both sites into consideration," said Kirkham. "We have also invested in an ultra-fast broadband cable between the U.K. and U.S. sites, enabling both facilities to operate on the same fast, secure network."