Tomenson Machine Works is a third-generation, family-owned manufacturer of precision hydraulic manifolds, with a focus on continuous improvement. The company turned to collaborative automation in its pin-stamping application to improve quality, profitability and worker satisfaction. The OnRobot collaborative RG6 gripper handles dozens of different part sizes with fast and easy changeovers, and sets the stage for ongoing automation in potential applications such as CNC tending, deburring and packaging. 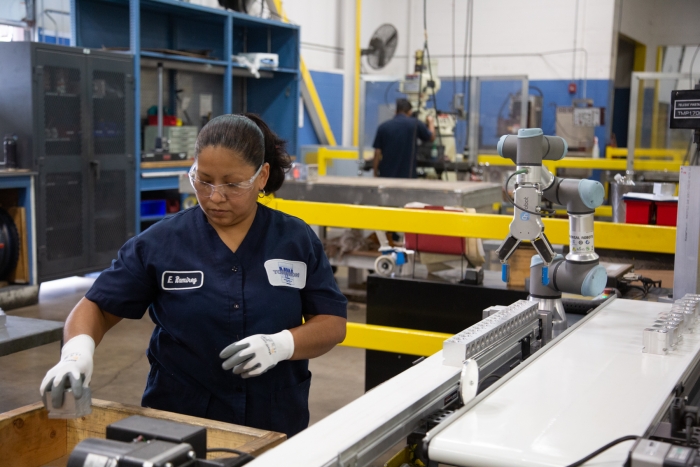 The robotic system with the RG6 gripper is a collaborative application that is safe alongside workers.

When Tomenson Machine Works looked at repetitive tasks ripe for automation, the job of placing parts in a pin stamper for engraving was low-hanging fruit. “Operating the engraver is tedious. It’s not something people go by and say, ‘Yay, I’m going to go run the engraver for eight hours,’” said Geoffrey Rose, secondary operations lead and quality supervisor at Tomenson Machine Works. Automating the tending of the pin stamper was also a straightforward process for the Chicago-based company’s first foray into automation. There was just one problem: Tomenson has hundreds of part sizes going through the pin stamper so the company needed an adaptive gripper able to handle a wide range of units.

“We liked OnRobot’s RG6 gripper for this application because we realized it could handle our biggest and smallest parts going into the pin stamp, and wouldn’t require any extra programming or machining of extra grippers or end effectors,” said Operations Manager Alex Roake, who deployed the gripper on a UR3 collaborative robot arm from Universal Robots.

Automating the engraving of parts at Tomenson Machine Works was a straightforward yet repetitive and tedious task for the operators to handle.

Ease of implementation leads to quick success, even with no prior experience
One of the challenges for Tomenson was that the company had no prior robotics experience. “No one in the company had ever dealt with collaborative robots or anything of this manner, especially not Geoffrey, who’s doing the programming every day and running the system,” explained Roake. “The first time he ever saw a collaborative robot or an OnRobot gripper was the first day we brought it in.”

Rose didn’t need much training however. “I watched Alex do one program, and then I just took it over and asked him to come back in an hour,” said Rose, who spent 30 minutes to confidently master programming the RG6. “After that I flagged him down and said ‘Hey, check this out, I think it’s good.’” 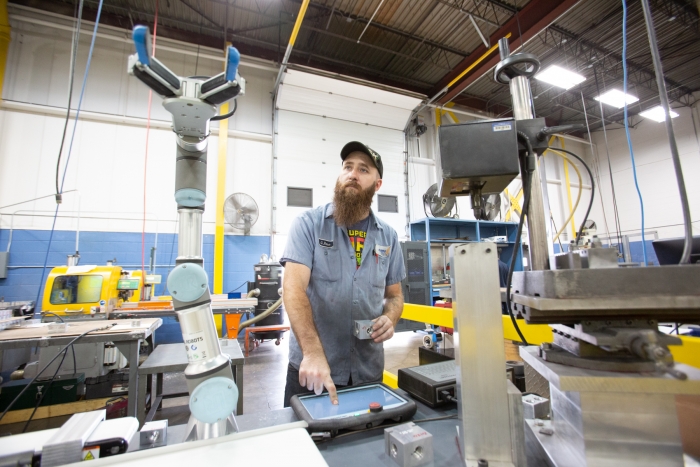 A 30-minute crash course in programming the RG6 gripper was all Geoffrey Rose, secondary operations lead and quality supervisor at Tomenson Machine Works, needed to get started.

The gripper’s easy programming meant that the company saw quick results with minimal training and significant cost savings on engineering hours. “As soon as you plug the RG6 in, it works. Programming the pin stamper is actually much harder than programming the gripper,” said Roake, who describes how long the process took. “For the entire system, it took us maybe a couple of weeks, but for the gripper specifically, less than a day.”

The pin stamping application requires the gripper to handle as many as 30 different parts to-date, but programming a new part is as little as five to 10 minutes since the robot can use the same basic code for every part and the gripper senses when it grasps the part, no matter what size it is.

Brian Einzig, automation specialist with FPE Automation, helped advise Tomenson on the robotic system. He doesn’t hesitate to call the OnRobot gripper a game changer. “Whereas we normally see the one gripper, one part, we now see the flexibility that the OnRobot’s grippers offer customers. It’s a customized tool out of the box,” he says. “Before they were using maybe a two-jaw gripper for one part and a three-jaw gripper for another part, now we’re seeing the RG6 can do multiple parts for multiple jobs.”

Because some parts require very thin fingers, Tomenson is able to 3D print finger extensions and simply attach them to the RG6 gripper, a task that takes only a couple of minutes. All of the plug-and-play gripper’s programming is handled intuitively through the OnRobot software that enables easy deployment on the robot arm with no additional PLCs required. Tomenson currently has developed and stored nearly 40 programs on the robot, all based off one initial program. 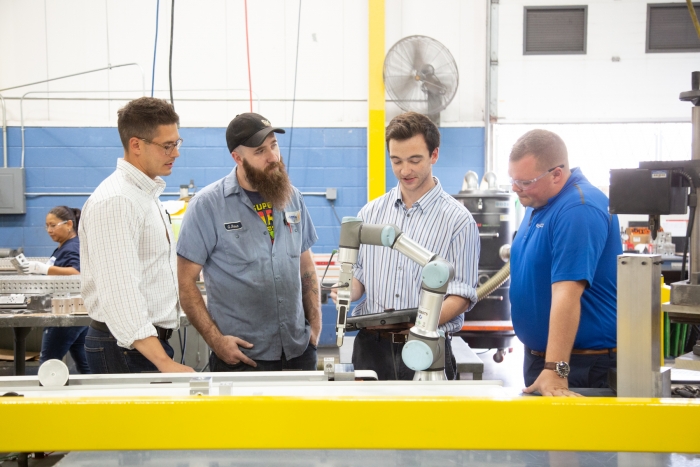 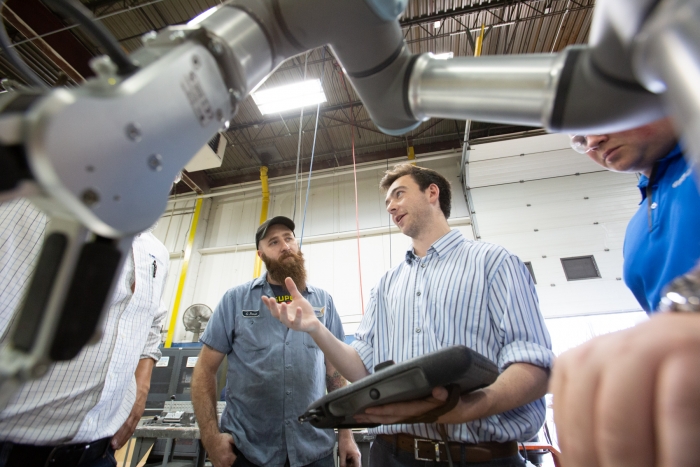 Operations manager at Tomenson Machine Works, Alex Roake (middle), explains that the RG6 gripper was well received. “Everyone’s intrigued with the gripper — we have employees bringing up other applications where we could use the gripper. Our employees’ curiosity is at an all-time high.”

Profit margins have also improved, especially on smaller products. “Before this system and the gripper, we definitely had lower profit margins on these small blocks,” said Alex Roake. “Now when we see a small block, we’re not afraid to quote it because we know handling thousands and thousands of these will be done by the robot, not a human, which makes us less fearful of quoting very high-volume small parts. By easily automating the small parts with the gripper and robot, we’re able to save engineering hours while also reallocating workers to focus on bigger parts with complex processes and longer cycles that require more attention." 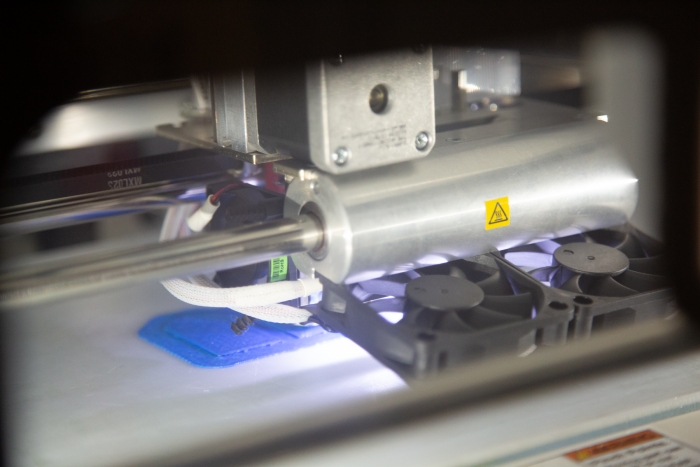 For handling smaller parts, Tomenson 3D prints its own “finger tips” for the gripper, and changeovers take a couple of minutes.

Just-in-time manufacturing now possible
The easy programming and implementation of the gripper also allows for fast response to customer needs. “Say it’s a Thursday and we get a hot order,” said Rose. “We’ll get the job set up and it’ll be on the saw, and on Friday I can have second shift run the robot, just loading and unloading it. By Monday, we’re already shipping the parts to the customer. It gives us a lot of flexibility to respond to market demands and on-time deliveries, as well as just ease-of-use around the shop.”

Ultimately, Tomenson expects a fast return on its investment by replacing a first-shift operator with the robot and gripper, estimating 13-month return on the gripper for a single shift. Alex added, “If we’re calculating the fact that we can now run our gripper on first and second shift, the number would be roughly half — so around six to seven months we will get our return on investment.” 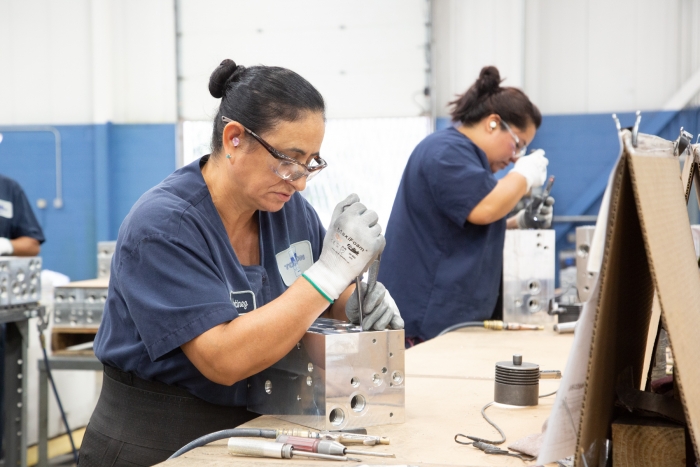 Automating the placing of parts in the pin stamper has freed up one operator per shift, who is now reallocated to more value-added tasks.

Arrival of robotic system made operator cheer
An additional benefit is increased employee satisfaction and excitement about the new technologies across the company. The process before automation was a human operator loading the pin stamp machine one part at a time, standing or sitting at a stool and using a foot pedal to activate the pin stamp, all day long. “When we first started installing the robot with the gripper, our previous pin stamp operator actually started cheering because she was so excited that we were able to move her to a different department where she was able to do more meaningful work,”  Roake said. "Now she’s working in the shipping department and helping pack the parts and inspect the parts before they make it to the customer.”

With the repetitive operation automated and staff moved to more valuable tasks, Tomenson also saw savings in where operators need to be deployed. “Now we load a conveyor that can run for around 45 minutes, and then just keep continuously loading and unloading the conveyor,” described Tomenson’s operation manager. “Since we are able to let it run unattended for around 45 minutes, we’re able to use the same person to run the line saw and the robot, as opposed to having two separate people. In terms of cost-saving, it’s basically equivalent to one operator.” 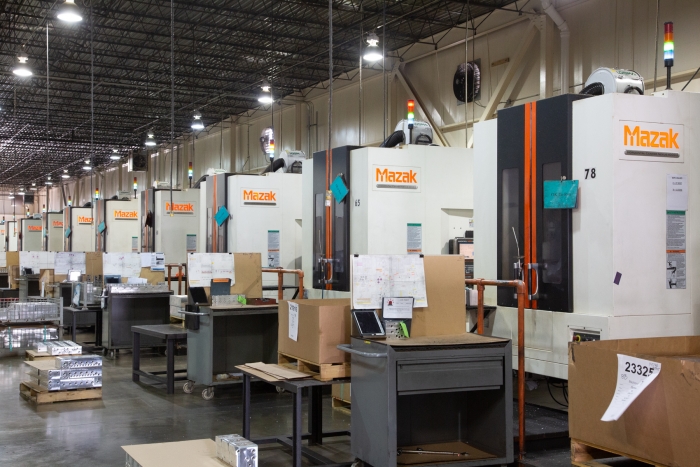 Tomenson Machine Works has 40 Mazak CNC machines. Tending these with RG6 grippers is one of the next automation projects the company is considering.

Quick success leads to search for new automation opportunities
Their first automation project off to a good start, Tomenson is already looking at other opportunities for collaborative automation according to Alex Roake. “Now that we have a successful application with the OnRobot RG6 gripper, we have looked into other possibilities in post-production or shipping or even loading up the CNC machines,” he said. “The ease of programming is what leads us to be confident in this decision that we can carry over to other departments, because we don’t need to hire an extra programmer, but can use our existing work force.”

Suggestions on where to put the RG6 gripper to work next doesn’t just come from management. “We have several of our employees actively come up to us with ideas on where they would like to see a robotic system go in next,” Roake said. “Everyone’s curiosity is at an all-time high.”