Giant robot being built for combat

After robot builder MegaBots Inc. determined that its Mk. II robot was unsafe for the two human pilots to operate during the upcoming Giant Robot Duel against Japan-based Suidobashi Heavy Industry’s Kuratas robot, the Hayward, Calif.-based company decided to build a new robot from scratch.

Called Mk. III, the 10-ton robot is expected to cost $2.5 million to build, including labor. 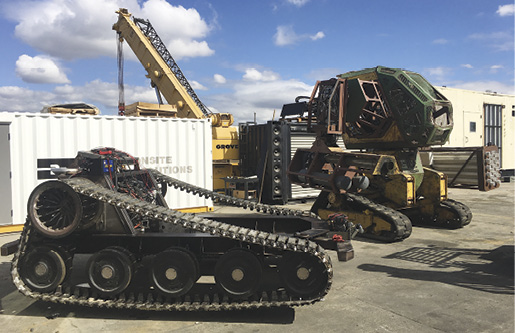 The new track base for Mk. III and the entire Mk. II. Image courtesy MegaBots.

MegaBots co-founder Matt Oehrlein said, “The Mk. II was designed to be an inexpensive prototype of a giant combat robot. The Mk. III is designed from the ground up to be the best robot possible, with the best hydraulics, robotics and pilot-safety technology available on the market.”

“We’re committed to piloting our robot in the duel, even given the risks, because we firmly believe in delivering on the science fiction dream the world’s been promised,” added Gui Cavalcanti, the company’s CEO and co-founder, who started his career as a CNC machinist. “That means we have to commit to pilot safety and a new era of robot design as we create the sports league of the future.”