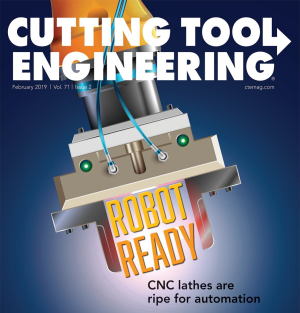 As the cover indicates, the February issue will include a focus on automation. In addition to Contributing Editor Kip Hanson’s cover story about automating CNC lathes, I wrote about the productivity gains Camcraft Inc. is realizing after installing a Makino Machining Complex (MMC2) flexible manufacturing system.

Whenever I write about companies with an FMS, which provides automated material handling via a rail-guided vehicle that transports a pallet of workpieces to a machine, I find that the companies realize growth in terms of sales, workforce and plant size. For example, Janusz Ksel, director of manufacturing for Camcraft, said the Hanover Park, Illinois-based manufacturer steadily grows nearly every year at about a 5 percent pace while expanding its facility roughly 50 percent over time and continuing to hire more workers.

In addition to the FMS, Camcraft has 29 robotic installations, many incorporating equipment from its Bartlett, Illinois-based sister company, Matrix Design LLC, which produces industrial automation systems.

With the productivity gains and other benefits automation brings, including creating jobs at manufacturers that effectively apply robots to remain competitive and grow and generating a need for more robotics technicians to help keep robots up and running, I find it curious when some people perpetuate the myth that robots take away jobs.

In an opinion piece by Thomas B. Edsall published Dec. 13, 2018, in The New York Times, he wrote that “one more robot in a ‘commuting zone’ reduces employment by about six workers,” based on a paper by an economist at Massachusetts Institute of Technology and one at Boston University. Edsall added that the economists’ paper demonstrates that the Midwest and sections of the South have far higher ratios of robots to populations than other U.S. regions.

“These job losses are concentrated in blue-collar occupations, such as machinists, assemblers, material handlers and welders,” Edsall stated. “Workers in these occupations engage in tasks that are being automated by industrial robots, so it is natural for them to experience the bulk of the displacement effect created by this technology.”

In response to the column, Jeff Burnstein, president of the Association for Advancing Automation, wrote a blog post that casts a clearer light on the positive role of robots and how they don’t steal jobs.

“When companies lose to their competition, that’s when workers lose jobs,” Burnstein wrote. “There seems to be this idea: If the robots hadn’t shown up, the jobs would have stayed. But nothing could be further from reality. Here’s the truth: We aren’t using enough robots.”

That makes sense considering that the U.S. jobless rate is expected to fall further and, according to his blog, the U.S. is 16th in the world in its robot adoption rate. The slow rate will hamper the ability of the U.S. to compete, Burnstein concluded, and may ultimately harm the American worker.