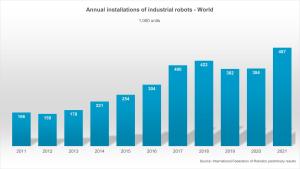 The North American robotics market experienced its best quarter ever to begin the year. Companies from the US, Canada, and Mexico ordered 11,595 industrial robots – up 28% compared to the first quarter of 2021.

Revenue rose by 43% and reached a value of $664 million. These results are in line with a positive trend worldwide: Preliminary data for 2021 show, that 486,700 industrial robots have been installed globally (+27% year-on-year).

“A strong recovery of the international robotics markets is currently in progress: Worldwide installations of industrial robots in 2021 even exceed the record year 2018,” said Milton Guerry, president of the International Federation of Robotics (IFR). “In North America, first-quarter order volumes for both units and revenue were at all-time highs. Across industries, the post-COVID crisis boom creates double-digit growth over the same quarter of last year.”

Automotive orders up
In North America, car makers and manufacturers of components accounted for 47% of robot orders in Q1 2022, their orders grew by 15% year-on-year. Several car manufacturers have announced investments to further equip their factories for new electric drive car models or to increase capacity for battery production.