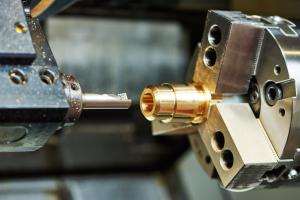 New research by the Copper Development Association Inc., McLean, Virginia, shows that U.S. machine shops may be underutilizing the machinability of brass by as much as 85 percent in part-processing operations. The study says manufacturers can and should be machining the material at significantly higher speeds and feeds—often five to 20 times faster—to increase productivity and profitability.

This is not necessarily a new problem, however.

“I think it’s just an ongoing perpetuation of the conventional speeds and feeds that people have been running for a long time,” said Adam Estelle, director of rod and bar at the Copper Development Association. “Some of that is because the machining handbook values are still pretty conservative.”

Besides habit, it is also an issue of education.

“You might want to get out of the comfort zone after you’ve been doing it one way for so many years,” he said, “but the handbook values confirm the old way to some extent. We encourage people to be aggressive with brass because it can take it. They’re missing out on opportunities to be more profitable and productive.”

He said an important factor to consider is the condition of a shop’s machine tools. People frequently are reluctant to push older equipment, and sometimes that is a valid concern. But for newer, more advanced machinery with greater spindle capabilities and power, there is much less to worry about. And the benefits when drilling, milling and turning can be big.

“You can run at these ridiculous speeds for very long periods of time,” he said. “The moral of the story is to push the limits.”

Another benefit may not be top of mind for design engineers.

“Brass is 100 percent recyclable,” he said, pointing out that the scrap value is incredibly high compared with other metals. “In many cases, you can recoup a lot of the initial raw material costs through scrap buy-back programs—in some cases up to 90 percent of the original material value.”

The high scrap value means that machining scrap in the form of chips can be used to repeatedly produce brass without losing material properties, which contributes to sustainability efforts.

Looking at the study, which was conducted in 2016 and 2017 and coincided with a survey of 417 machine shops, Estelle also cited the performance of brass versus steel and stainless steel. When single-point turning with carbide cutting tools, brass was able to run at over 4,000 sfm. 12L14 steel peaked at 30 percent of what brass achieved, and 304L stainless steel topped out at 20 percent of brass.

“That shows you just how much faster you can practically go,” he said. “The tool life for brass was at least eight times longer at more than triple the speed.”