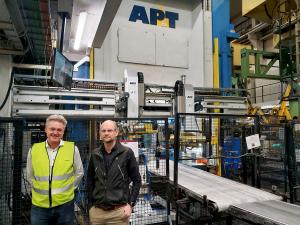 With a modern control system, a 20-year-old production line can perform and have the same availability as if it were new. Shiloh in Olofström, Sweden is well aware of this – they tasked AP&T with exchanging the control system on one of their existing press lines in 2019.

Operating on the global stage, Shiloh Industries with HQ in the US focuses on developing and producing light-weight solutions for the automotive industry. In Olofström in south-west Sweden, they make various types of steel parts and components for passenger cars and trucks, everything from small consoles to heavy-duty bumpers. In forming their largest parts, they in part use a transfer line installed by AP&T at the end of the 1990s. It includes an extremely powerful hydraulic press with 1000 tons of press force and two SpeedFeeders for blank feeding and unloading.

Two years ago, after operating for 20 years, it was time to secure the line for the future by adding a new control system.

“To ensure continued high availability, operator safety and performance, we decided to switch out the control system and sent out a request for proposal,” says Joakim Lennartsson, Plant Manager of Shiloh in Olofström.

A complete solution from AP&T
In stiff competition with several other suppliers, AP&T was finally awarded the project.

“AP&T presented the best solution. Having the security of entrusting the same supplier that designed, manufactured and integrated the equipment to make the update was yet another reason we chose AP&T,” says Lennartsson.

The new control system is the same as the one installed on AP&T's newly manufactured machines. It was introduced in 2019 when AP&T started using Siemens’ new software platform (TIA portal). All operator functions are controlled from one and the same control panel and a user-friendly LOGOS interface.

Time-critical assignment
The plan was to get the entire installation done during a very short manufacturing stop window between Christmas 2019 and New Year.

“We maximize utilization of our machines and to minimize standstill, it was important that we stick to the schedule,” says Lennartsson.

“Rebuilding and upgrading an existing line in a short period of time is always a challenge. But we kept to the schedule. When we started manufacturing again after the new year, we had already exchanged all electrical and electronic components and installed the new control system with new light curtains, a new operator panel and other auxiliary equipment. It was basically just a matter of flipping the switch to restart production,” says Anders Rundén, project manager responsible for the project at AP&T.

The agreement included service and maintenance for 24 months and after two years of flawless operation, Shiloh is very satisfied.

“Everything has met our exact expectations so we couldn’t be happier,” says Lennartsson.