Global trends toward reducing carbon footprint and operational costs as well as the push for high-precision processing tools have led to increasing demand for compact laser systems that can be implemented in processing plants and production lines. 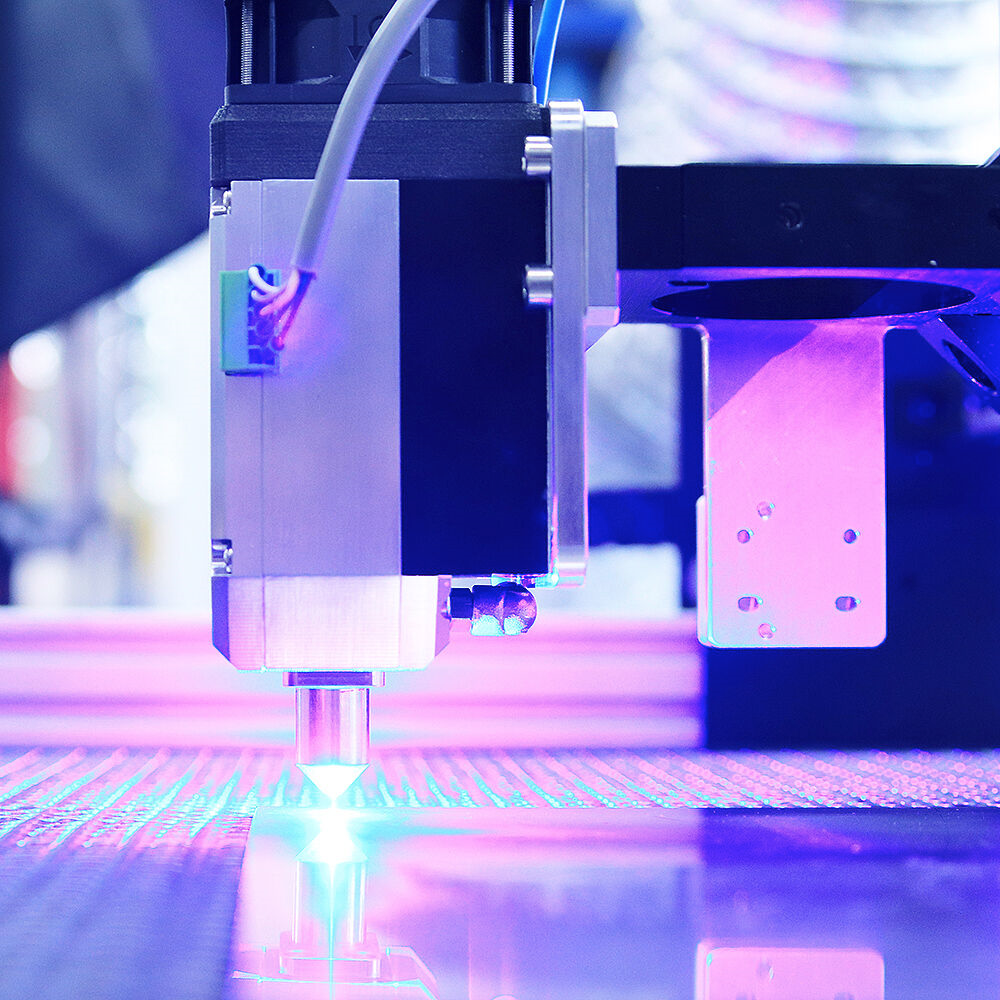 Earlier this year, Opt Lasers has released the world’s first compact three-laser-diodes laser head for CNC machines, namely PLH3D-15W, while Opt Lasers’ next release, a compact six-laser-diodes laser, PLH3D-30W, awaits its launch in June. PLH3D-15W and PLH3D-30W laser heads were developed as subsequent product lines following the Opt Lasers Grav’s compact PLH3D-6W-Series. The innovation introduced by these products’ design was recognized in the form of receiving an EU grant to implement these solutions. These innovative products carve a path towards a more sustainable future as increasing applications require versatile, yet compact and energy-efficient solutions. PLH3D-15W and PLH3D-30W laser heads emit light at 445 nm, which is more efficiently absorbed than IR or CO2 laser beams by many materials being laser cut or engraved. This translates to lower power consumption needed to laser process the material of choice, which is multiple times lower than the power consumption of an equivalent CO2 laser.

The interior design stability is crucial to the performance of the laser system. Industrial processing requires a system that can endure arduous hammering motion and machine vibrations. The system designs of Opt Lasers 15 W and 30 W laser heads have been devised to resist the hammering motion as well as oscillations typical for industrial processing plants and CNC machines. This is achieved with stable laser diode housings and mirror mounts. The innovation introduced by the design resulted in receiving an EU grant to implement this solution.

Industrial laser processing has so far typically utilized bulky and heavy YAG solid-state laser modules, normally based on Nd:YAG or Yb:YAG crystals. Neodymium or ytterbium YAG lasers are usually pulsed lasers that lase in the IR at 1064 nm and 1030 nm respectively, effectively suffering from low power absorption across many types of materials. CO2 lasers typically experience even lower power absorption and thus lower processing efficiency. The power absorption on copper can go as low as 5% for an IR laser, while CO2 lasers cannot process it at all as the absorption of a CO2 laser on copper is less than 1%. What’s more, IR lasers achieve poor grayscale if used for wood engraving.

Conversely, the laser beam emitted by blue laser modules based on 445 nm Nichia laser diodes, such as PLH3D-15W and PLH3D-30W, experiences much better absorption on many commonly processed materials. A higher absorption coefficient translates to higher possible throughput and allows processing of a given material with higher precision and lower power consumption. For metals, absorption coefficients are equal to: 445 nm - 65%, IR YAG - 5%, CO2 - <1% for copper; 445 nm - 45%, IR YAG - 35%, CO2 - <3% for stainless steel; 445 nm - 85%, IR YAG - 70%, CO2 - 6% for Titanium. However, it is worth noting that only PLH3D-30W is suitable for micro-welding or engraving copper as PLH3D-15W has too low optical power for this particular task as a result of copper’s high thermal conductivity.

PLH3D-15W and PLH3D-30W are compact multidiode laser systems, which utilize 3 and 6 sustainably used 445 nm laser diodes correspondingly, being the first of their kind in the world. These modules are made with durable industrial-grade components, including 3D-printed air chambers.

Opt Lasers’ 15 W and 30 W lasers can be installed on virtually any CNC machine or integrated into larger systems. These modules can also be operated underwater because of the lower wavelength of the emitted light, unlike infrared YAG or CO2 lasers, for which water is not transparent. In contrast to YAG and CO2 lasers, Opt Lasers’ 15 W and 30 W laser heads do not require constant calibration or a sophisticated cooling system.

PLH3D-15W and PLH3D-30W are particularly suitable for implementation in universal multi-tool universal machines and production lines. The lightweightness and relatively small size translate to high scalability as they allow the installation of multiple units on a single machine at a lower combined cost to produce the desired effect.

Furthermore, PLH3D-15W and PLH3D-30W can be controlled with the same signal that commands a spindle, which can be a 5 V or 10 V analog signal or a 0-24 V PWM/TTL signal. In addition, with the drivers being integrated inside the laser modules, they can operate at high modulation frequencies above 30 kHz. In comparison, CO2 lasers can only use 5 kHz modulation frequency, while YAG lasers can be operated at approximately 25 kHz modulation frequency. PLH3D-15W’s and PLH3D-30W’s high modulation frequency allows them to cut and engrave small precise features at high speed. Lower modulation speeds of CO2 and YAG lasers result in their inability to switch the laser on and off fast enough, which means they cannot process certain features. The controllers integrated into PLH3D-15W and PLH3D-30W are also characterised by their high IP Code, or Ingress Protection Code, of IP62, which means they are well-protected against mechanical damage, dust and water drops. The controllers used also have a built-in thermal protection system, which protects laser diodes from overheating.

PLH3D-15W and PLH3D-30W can be implemented into virtually any CNC machinery to process a wide range of materials. However, PLH3D-15W is better suited for processing wood, while PLH3D-30W can also be used for micro-welding and engraving copper. In general, these laser heads can cut or engrave materials such as leather, textiles, wood and plastics. They can also engrave stainless steel, mild steel, tool steel and Titanium. For instance, PLH3D-15W can typically cut 1.3 mm thick leather in a single pass at 21 mm/s, which is equivalent to cutting 0.9 km (0.55 mi) of leather in 12 hours. The same material can be cut with PLH3D-30W at 42 mm/s, which is then equivalent to cutting 1.8 km (0.55 mi) of leather in 12 hours. However, it is typically advantageous to cut the material being processed at higher speeds in multiple passes, while the overall processing speed stays roughly the same. 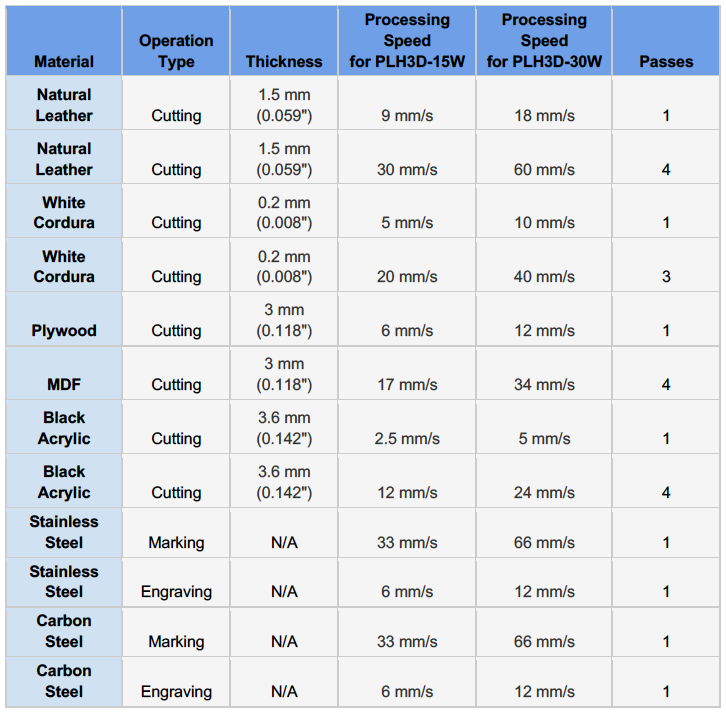 This technology has been developed as an EU-funded research project No. POIR.01.01.01-00-0988/18-00, namely “Development of innovative multidiode cuttingengraving head technology with the application of 450 nm wavelength laser diodes”.

Opt Lasers, established in 2014, is a brand of Tomorrow’s System Sp. z o.o., and a leader in providing compact engraving and cutting laser heads for the CNC machines and 3D printers markets. Headquartered just outside of Warsaw, Poland, Opt Lasers is a respected European manufacturer of high-quality optical and electronic devices. Opt Lasers’ portfolio encompasses industrial-grade laser heads for engraving and cutting, standard and custom laser modules, laser diode drivers and temperature controllers. It is an OEM manufacturer with extensive laser characterization capabilities. Opt Lasers’ headquarters contain electronics and laser R&D facilities, a full-service machine shop and a well-supplied stock of components. Opt Lasers works with a variety of industrial customers to provide OEM laser modules for integration into larger systems at scale for a variety of applications. Opt Lasers also provides an excellent selection of laser diodes. Visit Optlasersgrav.com and Optlasers.com for more information.