RCM Industries Inc., a Wheeling, Illinois-based manufacturer of die-cast aluminum components for industries such as automotive and consumer products, found itself in competition with low-wage suppliers in Mexico for a large outsourced project. “We had to look at how to drive cost out of the product without reducing the value that we provide our customers,” said Mike Higgins, RCM Industries director of sales and marketing. “Without the cobots, we would not have had a shot at that work.” 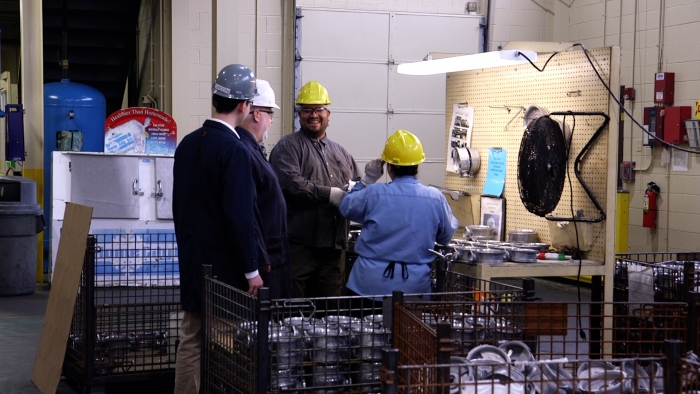 By deploying the UR cobots on all three shifts, RCM Industries is saving a total of eight operators in the three cobot applications now deployed.

The current automation project involving CNC machine tending had specific requirements that were ideally suited to the e-Series cobots from Universal Robots. “We recommended the UR10 e-Series robot specifically because of the increased repeatability,” explained Cameron Friend, automation specialist at FPE Automation who helped RCM Industries make its decision. “Fifty microns was needed for their very high-precision application, and we also recommended the UR10e due to the force-torque sensing capability.”

RCM has now deployed UR10e cobots in two identical cells where they each tend two dual-spindle CNC lathes in the same cycle, manufacturing a consumer plumbing product. Operators simply load parts on a table and the robots move from station to station, picking up a raw part, putting it in a pre-fixture to align it correctly, placing it on the first chuck then the second chuck, and finally dropping the completed parts onto a conveyor belt to return to the operator. The robot’s integrated force-torque sensing allows it to search for the correct position on the chucks and self-align. The force-torque sensing also enables the robot to detect if a part is out of shape and rejects those that don’t load correctly. 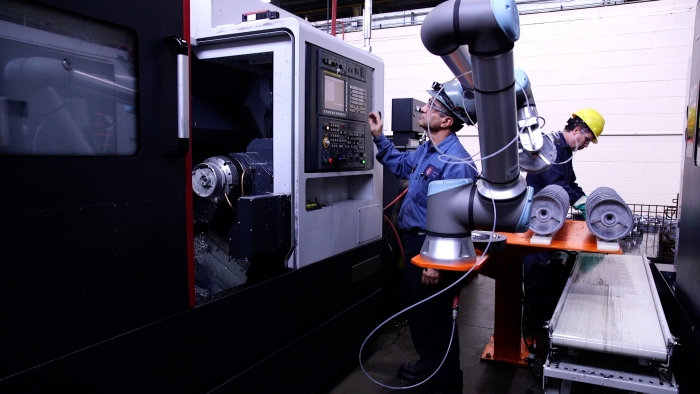 A significant benefit of the UR cobots is their ability to operate (based on risk assessment) without any safety fencing. This enables operators and CNC machinists to work right alongside the cobots in the cell without having to tag in and out and stop the operation of the cell every time the machining cycle needs adjustments or parts have to be loaded.

“One of the main tangible benefits that we got right away was a consistency of the throughput from those cells,” said Rob Marconi, RCM Industries director of engineering and technology. When operators were manually loading machines, they were often juggling multiple tasks such as checking parts and bringing parts in and out of the cell. That meant that even though they could load the machines fairly quickly, they could also be inconsistent. “With a robot, it’s consistently doing the same motion every time at exactly the same time, so we immediately saw about a 15 percent increase in throughput as soon as we deployed them,” Marconi added.

While the robot works, operators can freely enter the cell to perform other tasks. The ability to deploy without safety fencing after performing an initial risk assessment is a key advantage of cobots over traditional robots. “If the cobot does not load successfully, it’ll issue an error to the operator, in which case the operator can go into the cell, remove the part, and start up the cycle again without having to open up any safety caging and lock and tag-out the cell,” Marconi said. 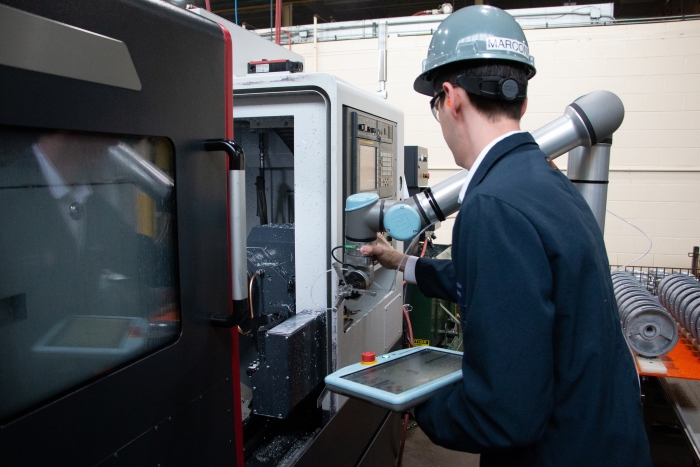 The UR cobots can be programmed by simply grabbing the cobot arm and moving it through the desired waypoints.

In addition, the lack of caging allows supervisors to make adjustments to machines while they are operating. “With the dimensions that we’re working with on these parts, it requires repeatedly checking the dimensions and making adjustments in the process, and we can continue running and allow the supervisor to make those adjustments,” Marconi said.

As a result of the cobot implementation, RCM Industries saw a dramatic decrease in the need for operators for those processes. For the machine tending application, the company typically ran three shifts with three operators running machines on each shift. The company was able to reduce that to one person managing all operations in each shift, essentially reducing staffing requirements by six people in that cell. Another application has a UR10 cobot picking up metal rings from a lathe tended by a cartesian robot. The UR10 puts the parts in a wash tank to wash off any lubricants, then circulates the parts in front of a blower to dry them before placing the finished product on drums. This application required one person per shift to operate it. Now the cell runs in the off-shifts with just the cobot and no operator, and the first shift operator checks all the parts that come off the second and third shifts, reducing staffing by another two people. 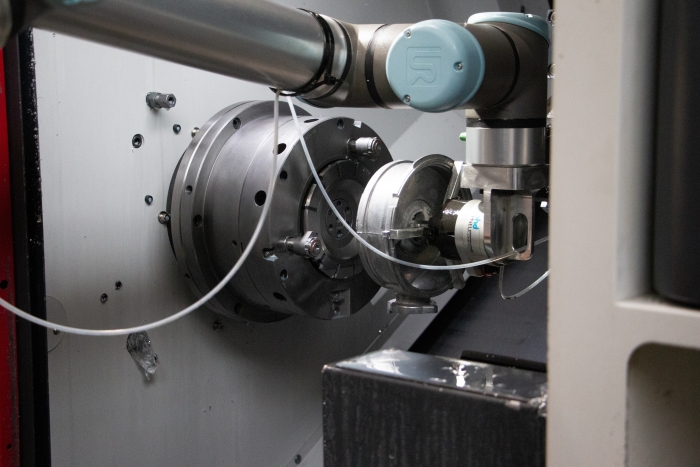 The UR10e is able to tend both machining cycles in the dual spindle lathe by placing the part on the first, then the second chuck.

While staffing requirements for those particular tasks were reduced through collaborative automation, sales and marketing director Higgins explains how the company was able to retain U.S. jobs by being more competitive. “We were able to gain revenue and gain capacity, so those employees could be deployed to other departments and other services within the organization,” he said. “When it comes to staffing in an urban area such as we are, it’s very tough. All of us manufacturers are fighting for skilled employees. We need to look at all times where we can automate, especially in repetitive tasks. It’s become a necessity to us here to remain globally competitive.”

This is also true for safety reasons, as Marconi describes. “We believe that any repetitive motion is something that we would like to automate for both safety reasons and also for the difficulty of finding operators who want to do those types of activities. If it can be automated and it’s repetitive, we want to automate it.”

This translates to additional benefits for RCM Industries’ customer, who can now keep the work in Illinois instead of having to outsource out of the country. “We look at the benefits we provided to this customer: specifically, we were closer to them, we understood their product, we had no language barrier, we were able to be on-site at their facility or they at ours in a moment’s notice, and with the automation we were able to bring consistency and sustainability to the process,” Higgins added. 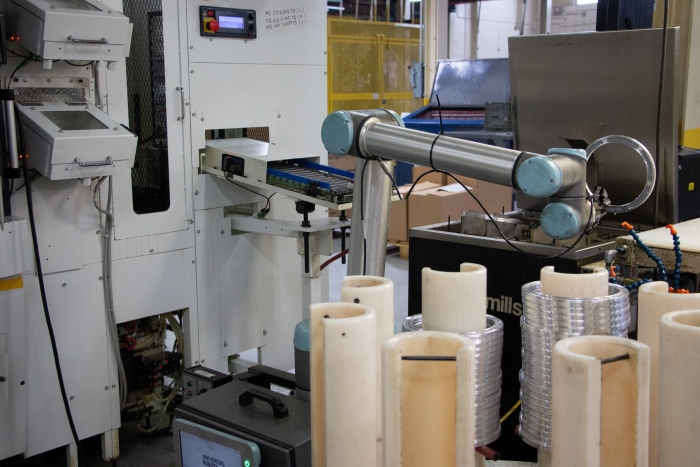 When the parts arrive from machining via outbound conveyor from the CNC, the UR10 picks them up and places them in a wash tank to rinse off any lubricants from the machining cycle.

The first application that RCM Industries deployed was an original UR10 handling the washing and drying of parts, which Marconi needed to optimize. “We actually had an intern come in with no robot experience whatsoever, learn the programming very easily, and work with it throughout the summer to speed up the cycle, to get it to keep up with the machine,” Marconi said.

The cobots’ ease of programming was a key advantage for Marconi, who wanted to keep the company’s robotics experts focused on the die-casting side of the business next door, where large, traditional industrial robots in cages pour molten metal into molds, rather than machine tending. With no background in robot programming, Marconi was able to download the PolyScope simulation software from Universal Robots and create the entire program structure before the robot even arrived. At that point, he simply downloaded the program to the cobot and taught it the waypoints on-site using the UR cobot’s teach pendant.

At that point, he simply downloaded the program to the robot and taught the robot the way points on-site using the UR cobot’s teach pendant.

To grip parts for the collaborative application, RCM Industries chose a PHD 3-jaw Pneu-Connect gripper from the online UR+ showroom. The gripper is UR+ certified, which means that it is plug-and-play ready for integration. “It has all the air valves already built in, all the wiring completed, and any coding necessary to integrate with the robot already done,” Marconi said. “We simply plugged a wire into the robot, installed the software directly into the cobot’s teach pendant, and we were ready to go.” 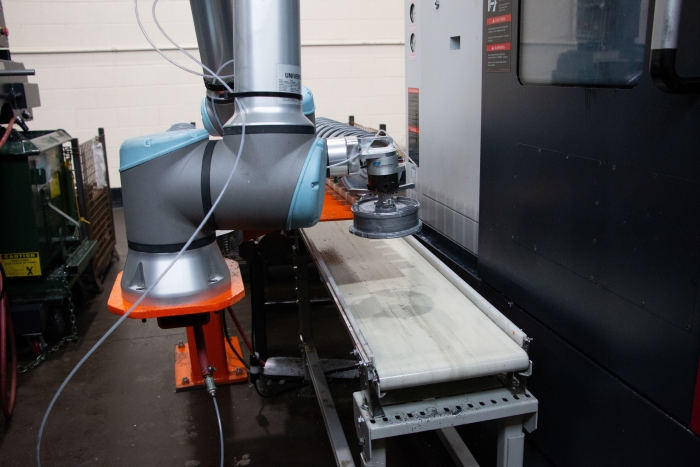 After the second machining cycle is completed, the finished part is placed on an outbound conveyor.

The combination of benefits of the collaborative robots resulted in a quick payback of just under a year. This calculation includes increased productivity and product consistency as well as reduced staffing for customer projects, including both labor costs and rising employee benefit costs. RCM Industries also found cost savings from minimal electricity costs, since UR cobots run on standard 110V electricity, along with minimal maintenance required, with no need for fully certified automation engineers.

Marconi expects to see continued benefits as well. “We have many future applications planned, but I think one of the main benefits of these robots is they’re so easily able to be redeployed,” he said. “As our line expands and as we’re looking to improve on throughput, we already have plans to take those robots, move them to different areas, and get better throughput from those cells without having to re-do any kind of caging or any kind of wiring.” This is very different than traditional industrial robots, which are rarely redeployed because of the costs and downtime related to moving bulky safety caging. 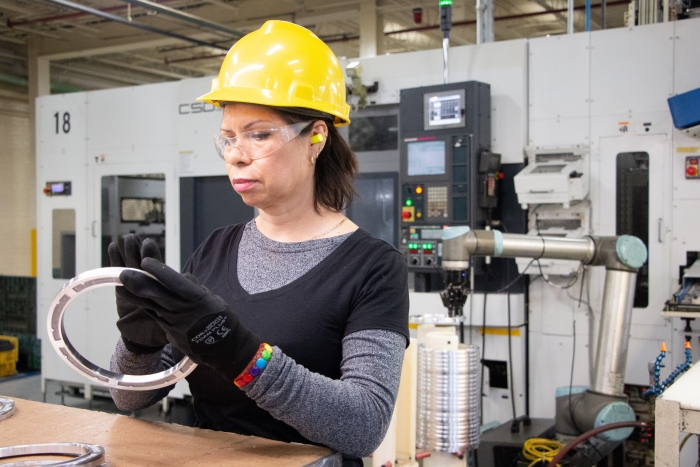 While the UR10 loads and unloads parts into the wash tank in the background, the operator can now concentrate on quality control. Before the UR10 arrived, this application required one person per shift to operate it. Now the cell runs in the off-shifts with just the cobot and no operator, with the first-shift operator checking all the parts that come off the second and third shifts, reducing staffing by another two people.

Automation specialist Friend said, “The e-Series robots are what we are leading with our customers as the cobot of choice.” Advantages he outlines include intuitive programming, great user experience, fast joint replacements, integrated force-torque sensing, and, of course, the increased repeatability of 30 microns for the UR3e and UR5e and 50 microns for the UR10e. “Those are all very important factors, and the UR e-Series is becoming the number one robot that we’re recommending to our customers because of how much benefit it adds to the applications that we’re seeing. Besides high precision machine tending these are tasks such as deburring, dispensing, packing and palletizing.”

Higgins noted that the company’s culture is now closely attuned to automation. “When we look at a manufacturing process and how we’re going to price our product, we’re not necessarily going to look at labor costs; we’re going to look at the labor cost in all cases against whether it can be automated,” he explains. “We’re always asking, ‘Can it be automated, and what is that investment, and does it make sense?’ And we’re finding in more cases than not, it makes sense.”