CNC automation: Should we?

“Robotic CNC automation is only for high-volume manufacturing.” That was once the case. Not anymore. The reason robotics was initially consigned to high-volume manufacturing was due to high integration and setup expense. This cost and lengthy robot setup time made it feasible only if the shop produced the same part thousands or hundreds of thousands of times. Robotic automation typically wasn’t considered for production quantities of less than 100,000 pieces just a few short years ago. 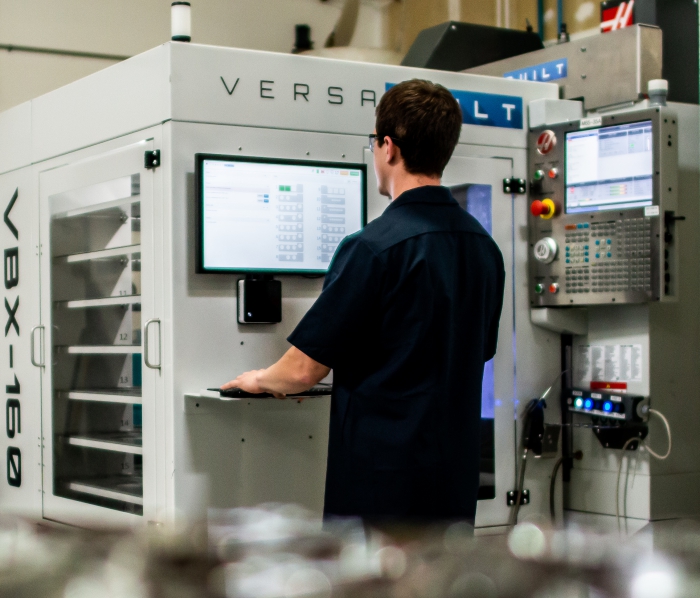 Today, with the flexibility of next-generation technology such as VersaBuilt’s patented MultiGrip Workholding, the high cost and time-intensive set up of traditional robotic automation systems have been drastically reduced. Robotic CNC automation is now affordable for low-volume manufacturing, while, at the same time, dramatically increasing worker output and reliability of the manufacturing processes. New technology allows effective automation of batch sizes as small as 10 pieces. How is it possible? With the VersaBuilt VBX-160 robotic part loader with MultiGrip technology, for example, adding a new part for automation is as easy as cutting a new set of vise jaws. No robot gripper design and no robot programming. MultiGrip technology makes it practical and affordable to use automation in CNC manufacturing where it was simply not possible before.

“We produce only a few parts. We don’t need robotic automation.” Consider the bigger picture. Robotic CNC automation has been demonstrated many times over to increase manufacturing output, ensure higher process precision and reduce errors, while significantly reducing cost and increasing operational profitability. In any size operation, aren’t these the same outcomes every company needs for business sustainability, no matter the number or type of parts?

“Our parts are all different shapes and sizes. It’s not possible to automate affordably.” With next-generation automation technology, a system such as the VersaBuilt VBX-160 robotic part loader handles mixed parts easily, quickly switching between different part shapes and sizes. It eliminates the high costs incurred with older technology to introduce and set up new parts, and the long change-over time needed to produce a different part. The VBX-160 takes about 1 minute to set up the next part to run. Part changeover of both the robot and the CNC is automatically performed. With automatic part changeover, this robot can process multiple part jobs in a single operator load. The flexibility of older robotic automation technology was almost nonexistent when it came to mixed part manufacturing. Next-generation automation technology brings a level of adaptability to mixed part manufacturing that was considered impossible just a few short years ago. 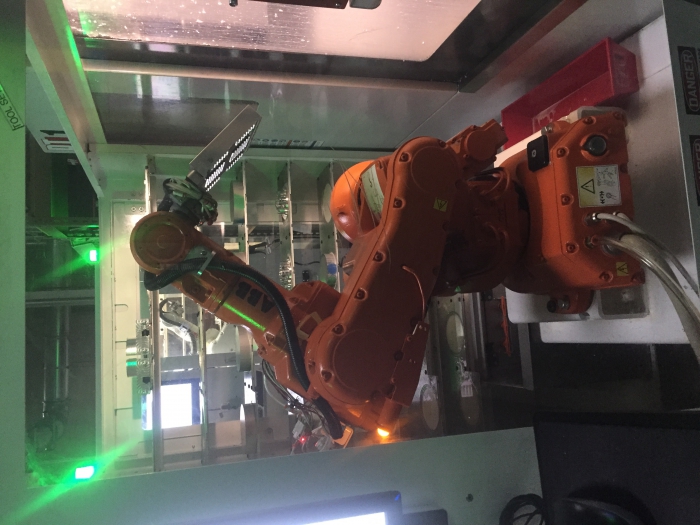 “I’ll have to lay off people.” Think back. Haven’t those fears always existed with new technology? For example, in the
transition from manual to computer-controlled machines, mass unemployment was anticipated due to the greater efficiency of the new machines. What actually happened was a huge increase in new jobs, together with a substantial growth in productivity.

Automation technology creates a better, more satisfying work environment by relieving employees from mundane and repetitive tasks, along with the ability to increase knowledge and learn new skills. (This is not to mention the fun of operating a robot, which in itself may be rewarding enough for many employees). Valuable staff will be retained longer and they will be more satisfied and productive at work.

There’s another problem: the inability to find workers. When I ask shop managers to describe their biggest headache, the No. 1 response I get is, “I can’t find enough qualified workers.” What about your operation? Skilled, reliable labor needed to run your production is in short supply. Robotic automation helps solve that.

As an example from my own experience, a single operator can typically tend to eight VBX-160s to run 24 hours of production. Assuming one operator for every two CNC machines, it would take 12 operators to achieve an equivalent level of production. Those are the same employees you can’t find. Or those who will decide to leave your shop for another job (or those you wish would leave). The robot is reliable and will work 24 hours a day, 7 days a week without
complaints. It’s a much better plan for long-term viability. Automation will free up your employees for higher-value, more satisfying work while you’re growing your operation.

“It requires skills my workforce doesn’t have.” This issue has been a roadblock for many CNC manufacturers in the past. Older robotic CNC automation technology required highly skilled (and high-cost) engineering teams to design and implement. Need to add a new part for automation? Call the robot engineering team. Problem with the robot system? Bring out the robot engineering team. Can you imagine calling your CNC vendor for an RFQ every time you had a new part to run? Or the CNC tech every time a part was out of tolerance? Next-generation robotic CNC automation systems are preintegrated and designed to be used by your current CNC machinists and operators with as little as 4 hours of training. 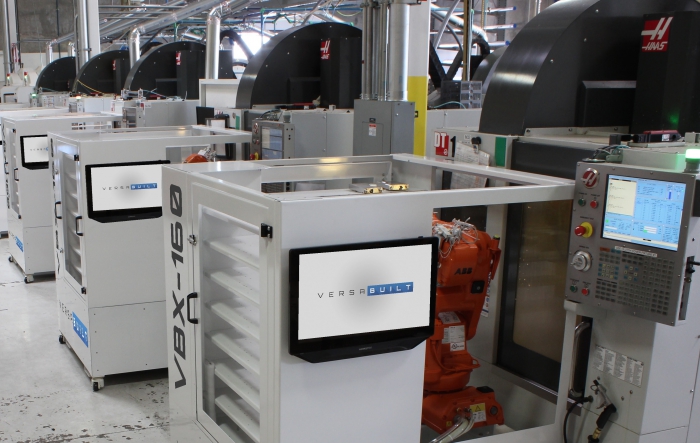 The VBX-160 processes multiple part numbers in a single load without operator intervention.

“It’s too expensive.” Let’s take a look at the real expense. As an example, a fully-loaded VersaBuilt VBX-160 is about $110,000 installed and running your first part. The cost to add new parts is about the same cost as using quick-change vise jaws in an operator loaded CNC and can be completed by your existing staff. Just like the operator loaded CNC, it can handle hundreds of different types of parts in a low-volume, high-mix operation. The difference is the robot will produce parts for 24 hours with about one hour of operator labor per day. No breaks needed, no shift
changes, and the robot never forgets to tighten the vise. ROI is usually achieved in the first 15 months of operation.

That doesn’t include the cost savings from eliminating the time needed to search, hire, train and supervise that employee. Or, if you’re trying to run a 24-hour operation, the perpetual problems of low productivity and mistakes on the night shift, even if you’re lucky enough to find reliable people who want to work. The robot happily stays on the job overnight and can switch jobs on its own without the need for an operator or supervisor.

With the right choice of robotic automation, your direct labor costs will be reduced by 50 to 90 percent. With only that savings, robotic automation has moved production way ahead. That doesn’t take into account increased equipment utilization savings or the reduction in the number of headaches caused by unreliable workers or not having the employees you need because they’re not available to hire.

“We’ve made improvements in our processes with training and lean manufacturing. It’s already increased our efficiency.” Two thoughts come to mind: is your operation really optimized around today’s technology? In
some companies, it was so inefficient before that almost any improvement looks good by comparison.

Are the incremental improvements based on traditional processes or are they efficiencies competitive with the best technology available which will build the future value of your operation? Robotic automation increases the utilization of your equipment by 200 to 400 percent. That’s another significant impact to your bottom line.

The real question here is, “How expensive is it for your company not to automate?” “We’re doing fine. Orders are up and so are profits. Why automate?” (The ever-popular, “If it ain’t broke, why fix it?”) 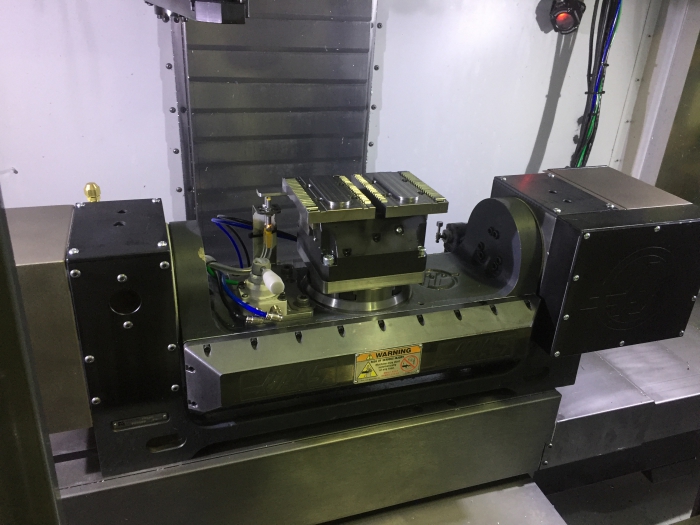 With the VersaBuilt VBX-160 robotic part loader with MultiGrip technology, adding a new part for automation is as easy as cutting a new set of vise jaws.

Congratulations! Your competitors will be glad to hear you’ve made that decision, especially as they’re moving forward with their own automation plans.

We’re lucky now. A strong economy gives us flexibility in the way we’re doing business that we won’t have if there is a downturn. That also makes it the ideal time to improve. With good sales and profitability, the impact of the change process is minimized. Production can be restructured for greater efficiency and to lower costs, and provide a sustainable foundation for your company to be resilient and adaptable when unavoidable changes occur in the market.

Perhaps the question to ask is, “Are you running just to keep up? Or are you creating a system that puts you consistently in front of your competitors?” You can bet that if you’re not doing it, your competitors will be. What if they shorten lead times and offer better quality for 30 percent less cost through automation? How will that impact your business?

According to Forrester Research, companies that master automation first will dominate their industries. If you’re looking to drive real volume and efficiencies in your production, get out of your own way. Next-generation, cost-effective robotic automation is the answer, especially for low-volume, mixed-part manufacturing.

Al Youngwerth is the CEO and founder of VersaBuilt Robotics Inc., headquartered in Boise, Idaho. VersaBuilt is a obotics technology company providing patented automated CNC technology and solutions to manufacturers worldwide. Its VBX-160 and MultiGrip Workholding and other products specifically focus on manufacturing applications where automation has not been viable in the past, including low-volume, mixed-part operations.