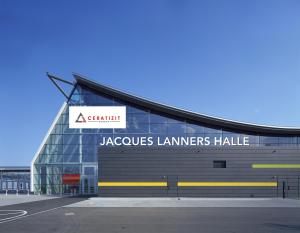 CERATIZIT S.A., Mamer, Luxembourg, 23 August 2018--Under the auspices of its marketing partnership with Messe Stuttgart, the CERATIZIT Group has obtained the right to choose a name for Hall 3 on the trade fair grounds for the next 10 years. The official dedication of the CERATIZIT Jacques Lanners Halle will be taking place in the context of AMB 2018.

“The original idea behind the hall names is to create a connection with outstanding companies,” said Ulrich Kromer von Baerle, President of Messe Stuttgart, explaining the background to the decision. “So we are very happy to have got CERATIZIT and Mr Lanners to sponsor Hall 3 by naming it for the next decade.” During AMB 2018 the CERATIZIT Jacques Lanners Halle, boasting a surface of 10,500 sqm, will also be hosting one of the CERATIZIT Group’s two stands (Stand 3B11). This is where the company will be showing the latest cutting tool solutions under the brand names of Cutting Solutions by CERATIZIT, KOMET, WNT and KLENK. Meanwhile Stand 1B10/12 in Hall 1 will be offering live shows and innovative product presentations, including a technological world first in the field of turning.

A home game for the CERATIZIT Group

The CERATIZIT executive board had no problem approving the partnership with Messe Stuttgart, as member of the executive board Thierry Wolter explains: “Since the takeover of KOMET at the end of last year, we now have three production plants in the immediate vicinity of Messe Stuttgart: Besigheim, Empfingen and Stuttgart-Vaihingen. That makes it like a home game for us, and the AMB is the perfect occasion for the inauguration of the hall.” Nor was the choice of a name for the hall a difficult decision. As grandson of one of the two company founders, Jacques Lanners is better acquainted with the CERATIZIT Group than most. In his role as chairman of the executive board he has decisively shaped the company in the past decade. “Mr Lanners is synonymous with the spirit of innovation, customer service and long-term thinking which are the key drivers for the CERATIZIT Group’s success. So naming the hall after him was a no-brainer,” Mr Wolter explains.

The naming of the hall forms part of a strategic increase in public relations and press activity on the part of the Group. “When it comes to products, trying new approaches repeatedly, with the aim of offering customers optimal solutions for their applications, is all part of the day’s work,” Mr Wolter says. “We would like to pursue the same strategy in public relations and the CERATIZIT Jacques Lanners Halle is an important milestone in this respect. In the years to come we would like to drop the persisting image of the hidden champion.”

A decisive landmark in the career of Jacques Lanners was the merger of CERAMETAL and Plansee Tizit, giving birth to CERATIZIT in 2002. In the following years he laid important foundations for the company as it exists today, which has tripled its turnover since then to reach a total in excess of 1.1 billion euros. Another milestone was the CB-CERATIZIT joint venture with Taiwanese partners in 2010, which was crucially promoted by him and has become a strong mainstay in China and Asia in the past years. Moreover, Mr Lanners played a decisive part in the takeover of the German precision tool manufacturer KOMET GROUP, which in recent months has made the CERATIZIT Group a full-range supplier with one of the most comprehensive cutting tool portfolios in the industry. His achievements have not remained unnoticed to others. For his service to the economy Mr Lanners received the Order of Merit of the Grand Duchy of Luxembourg (Commander) in 2017. Already in 2009 he had been voted Luxembourg’s Entrepreneur of the Year.