Capgemini’s Digital Transformation Institute reports that manufacturers expect investments in smart factories will drive a 27 percent increase in their operation efficiency over the next five years. This would add $500 billion in annual added value to the global economy.

A “smart factory” is a factory that integrates digital technologies such as IoT, big-data analytics, artificial intelligence, and advanced robotics to improve efficiency and productivity. These factories are where concepts such as Industrial IoT and Industry 4.0 are being implemented.

The Institute’s findings are the result of a survey of 1,000 executives across six manufacturing sectors: industrial manufacturing, automotive & transportation, energy & utilities, aerospace & defense, life science & pharmaceuticals and consumer goods. Directors from the US, UK, France, Germany, Sweden, Italy, India and China were interviewed in both qualitative and quantitative interviews.

Because previous automation opportunities have reduced low-skill jobs, companies are now trying to address the labor skills to adapt to the new environment. Fifty-four percent of respondents are providing digital skills training to their employees and 44 percent are investing in digital talent acquisition to bridge the skill gap. There are increased opportunities for highly skilled workers in areas such as automation, analytics and cybersecurity.

The surveyed manufacturers expect that 21 percent of the world’s factories will be smart factories by the end of 2022. Aerospace and defense and industrial manufacturing and automotive will lead this transition.

The findings were announced in Capgemini’s report, “Smart Factories: How can manufacturers realize the potential of digital industrial revolution” (PDF). 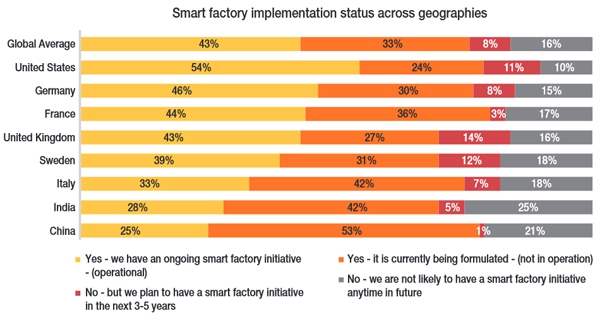