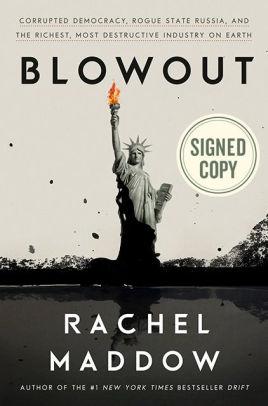 Although the book doesn’t cover machining parts, “Blowout” by Rachel Maddow, host of “The Rachel Maddow Show” on MSNBC, does examine an industry that’s a major consumer of precision machined parts—oil and gas.

The 400-page, 29-chapter book, published by New York-based Crown, takes a well-researched look at some of the shady practices of and even shadier characters in what is billed on the cover as “the richest, most destructive industry on Earth.” Although oil and natural gas are extracted from locations across the globe, Maddow focuses on a few regions with compelling storylines. These include Oklahoma, Equatorial Guinea and Russia, especially its dealings with ExxonMobil and Rex Tillerson, the company’s former CEO and former U.S. secretary of state.

For example, as Russia continues to harvest the country’s cheap and readily accessible oil, the Russian oil giant Rosneft works out a deal with ExxonMobil to let it get a crack at the hard-to-get Siberian oil and gas in the Black Sea. Of course, it’s well understood that Russian Federation President Vladimir Putin would be in charge, indefinitely.

“Putin stood over Tillerson’s right shoulder as the Texan affixed his name to the agreement,” Maddow wrote. “When the ink was dry, the two men raised a glass of champagne and toasted the future. This was ‘an historic day for ExxonMobil and Rosneft,’ Tillerson told Putin.” As it turns out, sanctions against Russia eventually caused ExxonMobil to pull up stakes in the Arctic.

One theme that repeats throughout the book is “The Resource Curse,” or “The Paradox of Plenty,” in which “countries dependent on oil as their major resource for development are characterized by exceptionally poor governance and high corruption … often devastating economic, health and environmental consequences at the local level.” Regarding the curse, the book quotes the late Republican senator Richard Lugar, who wrote, it “exacerbates global poverty, which can be a seedbed for terrorism, it dulls the effect of our foreign assistance, it empowers autocrats and dictators, and it can crimp the world petroleum suppliers by breeding instability.” All while a select handful make off like bandits.