Automation and 5-axis machining on display at WIMTS

As manufacturers continue to be challenged by a shortage of skilled workers and the need to boost productivity, automation remains a topic of significant interest. That was certainly the case at the Wisconsin Manufacturing & Technology Show. The biennial trade show took place Oct. 8-10 at the Exposition Center at Wisconsin State Fair Park, West Allis, Wisconsin.

In addition to automation and robotics competitions for students, the event included two seminars about automation on the second day. With a subtitle of “The Robots are not coming for Our Jobs,” the first was “How Automation Drives Productivity in Contract Manufacturing” by Erik Anderson, chief commercial officer at New York-headquartered Basin Holdings LLC. 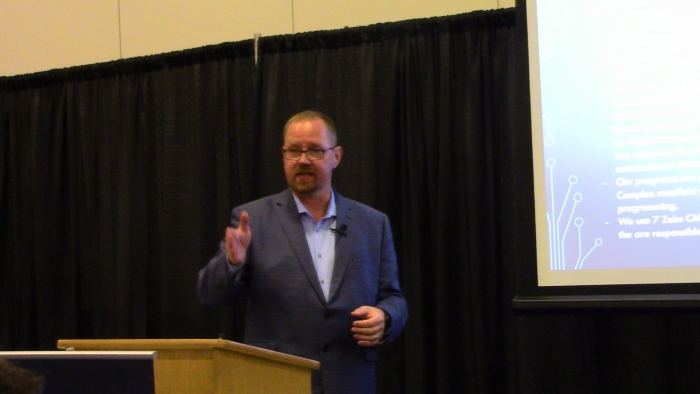 Anderson’s seminar focused on the operations at Basin Precision Machining LLC, Jefferson, Wisconsin, where he was president and CEO and is currently based. The contract manufacturer only has one conventional robot, which tends a lathe, but is highly automated nonetheless, he said, adding that as automation rapidly gets more flexible, it becomes even more suitable for low-volume, high-mix machining environments.

According to Anderson, automation enhances a shop employee’s job security and is a tool to empower workers to do more value-added activities and enable a manufacturer to grow with the staff it already has. Although he noted that the company did add six employees since 2016, its annual revenue increased from about $22 million to $43 million during that time thanks to automation. 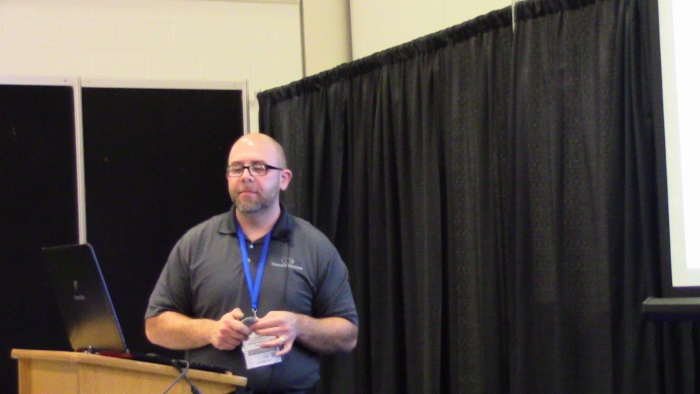 The second seminar to address the subject was “Automation for the Job Shop World” by Chris Robson, advanced applications engineering specialist for Concept Machine Tool Sales Inc., with equipment distribution facilities in Plymouth, Minnesota, and Delafield, Wisconsin. He provided some examples of machines that are suitable for automating small lot sizes: the FANUC RoboDrill Plus-K60 with its simple interface, the Yasda PX30i vertical machining center for larger parts and the Kitamura Mycenter-HX250iG horizontal machining center with 10-station pallet tool. In addition, Concept offers Halter robot and CNC machine systems for job shops.

At shops that run more than one shift, Robson said they are especially challenged to hire skilled labor for the second and third shifts. Therefore, they tend to have humans operate machines during the day and activate automation systems at night.

Areas that need to be addressed when implementing automation because they make automating production more difficult include chip control problems and short tool life, he said. 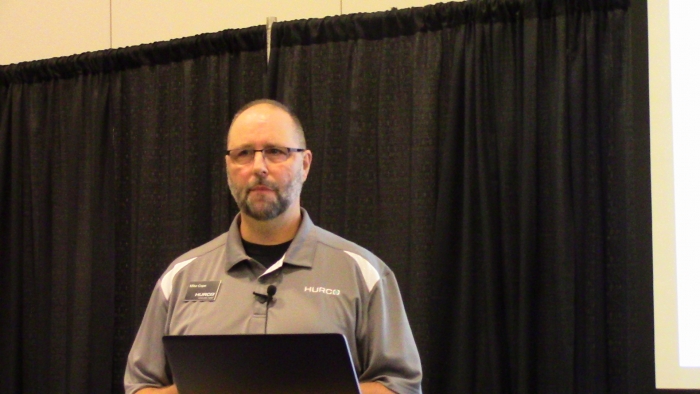 Five-axis machining should not instill fear, according to Mike Cope, senior applications engineer and product technical specialist at Hurco USA.

Another technology that more shops are integrating into their operations is 5-axis machining. Mike Cope, senior applications engineer and product technical specialist at Hurco USA, Indianapolis, addressed it in his Oct. 9 seminar titled “5-axis Ain’t that Scary: The Definitive Guide to 5-axis Machining,” or “The Power of Five … 5-axis Machining Simplified.”

He estimated that 85% of the shops that perform 5-axis machining are doing 3+2, or five-sided, machining rather than simultaneous 5-axis machining. The simultaneous approach imparts finer surface finishes, extends tool life and enables a cutting tool to have easier access to difficult-to-reach part locations, but 3+2 is easier to program and has fewer interference issues while offering an excellent roughing strategy.

During the presentation, Cope defined some of the buzz words related to 5-axis machining: tool center point management (TCPM), transform plane, surfaces and surface normals, and tool vector. With TCPM, simply program the part using the workpiece zero location; there is no need to account for the distance from part zero to the axes centerlines of rotation. This makes program and part setup independent from machine setup and configuration.

With a transform plane command, a new work plane is defined, and the Z-axis is perpendicular to the newly transformed work plane.

Surfaces and surface normals are not exclusive to 5-axis machining, Cope noted, but 5-axis programs use the surface normal, which is an axial vector that is perpendicular to any given surface, as a reference for tool tilt angles.

He defined tool vector as the tool tilt angle and direction away from a surface contact point. Tool vector input allows a program to run on any 5-axis machine—regardless of axis configuration.