Are you ready to 'Integr8' IIoT technology? 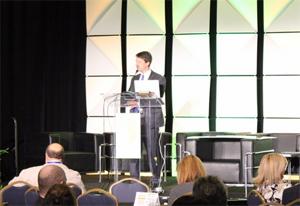 Earlier this week we shared the conclusions of the McKinsey Report, which stated that it may be possible for U.S. manufacturing to grow by 20 percent and add more than 2 million jobs by 2025. That was the good news. It can only happen, however, if manufacturers invest in Industry 4.0 technology.

“Companies cannot capture the demand opportunities described above unless they step up their game,” according to the McKinsey report, overview. “New technologies will play a large role in determining whether they can compete. ... Industry 4.0 is driven by an explosion in the volume of available data, developments in analytics and machine learning, new forms of human–machine interaction (such as touch interfaces and augmented-reality systems), and the ability to transmit digital instructions to the physical world. Such complementary technologies can run smart, cost-efficient, and automated plants that produce large volumes—or, conversely, plants that turn out highly customized products.”

Are U.S. manufacturers getting the message? Software Connect, a vendor-neutral service that enables businesses to source the ideal technology for their needs, has just released a new report based on survey data from 158 manufacturing companies, analyzing the businesses' current and planned use of Industry 4.0 components such as material requirements planning (MRP) software, manufacturing execution system (MES) software, and other industry-specific technology tools. The survey was completed in September 2017, and was released on November 14th.

Among the study's key findings:

“Identifying the right tools can go a long way towards helping manufacturers plan predictable budgets and time frames, enhancing operational efficiency. On the shop floor, MES software can continually measure and analyze resource utilization and performance in real time. By investing in the right technology tools and annually auditing their technology needs, manufacturers can gain an edge over competitors that haven't incorporated modern technologies into their processes.”

Those percentages show that not a small percentage of manufacturers have yet to get started in using such tools. Detroit’s Automation Alley, a technology and manufacturing business association, held a conference last week with the aim of educating them. “Integr8” attracted more than 500 manufacturing and technology professionals with seminars on such topics as cybersecurity, big data and artificial intelligence, additive manufacturing, advanced materials, robotics, the Industrial Internet of Things, cloud computing and modeling, simulation and visualization.

“While no one knows for certain what our nation’s employment landscape will look like in a decade, it’s important we are not threatened by technology, but empowered by its potential,” Automation Alley CEO Tom Kelly told the conference. “Whether you belong to a large corporation, a small-to medium sized business, or a startup, disruptive innovations are creating upheavals to the landscape of many industries and their business models.”

Breakout panels at the event were a resource for my upcoming feature on shop-floor communication: Watch for it in January.