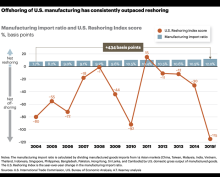 While data used to calculate the 2015 A.T. Kearney U.S. Reshoring Index contradicts reports of a reshoring trend for U.S. manufacturing, the index itself should not be construed as opposition to reshoring efforts, according to A.T. Kearney, the Chicago-based global management consulting firm that publishes the index.
Read More
Women in Manufacturing, Case Western Reserve partner for leadership
01/28/2016 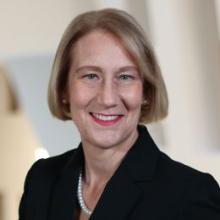 Women in Manufacturing (WiM) and Case Western Reserve University’s Weatherhead School of Management recently announced the creation of a Leadership Lab for Women in Manufacturing, which will provide executive education and training to WiM members in mid- to high-level management roles in the industry.
Read More
John Gardner starts CNC Broach Tool LLC
01/19/2016 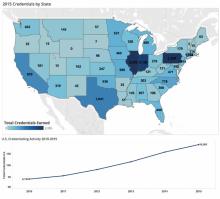 The National Institute for Metalworking Skills (NIMS), Fairfax, Va., last year awarded a record number of credentials to individuals seeking to start or further a career in manufacturing, NIMS announced in a Jan. 26 news release. In 2015, NIMS issued 21,420 industry-recognized credentials, with 18,901 of them issued in the United States, the organization reported. Compared to 2014, that's a 20 percent increase in U.S. credentials issued by NIMS.
Read More
Mastercam Joins WorldSkills
01/27/2016

WorldSkills International, an Amsterdam-based organization promoting the need for skilled professionals through various means, recently welcomed Mastercam to its global partnership group, according to a CNC Software news release issued Jan. 26. The partnership begins in early 2016.
Read More
Industry-led initiative rebuts report questioning reshoring
01/24/2016
Harry Moser, the founder and president of the Reshoring Initiative, an industry-led group out to prove offshoring is not always the best economical decision for companies, takes issue with the recently released 2015 A.T. Kearney U.S. Reshoring Index, which suggested that the reshoring trend was an aberration. A.T. Kearney, a global management consulting firm headquartered in Chicago, reported in December that its reshoring index dropped to -115 in 2015. A negative value is said to indicate net offshoring, according to the consulting firm.
Read More
Okuma names Caron Engineering its Partner of the Year
01/21/2016 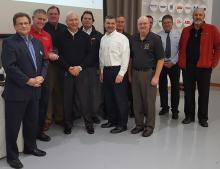 Okuma America Corp., Charlotte, N.C., recently named Caron Engineering its Partner of the Year, according to an Okuma news release issued Jan. 6. Based on Okuma's annual distributor survey, Caron Engineering received the highest overall partner rating from among all 50 members of Okuma's Partners in THINC, which is a collaboration network of more than 40 industry leaders who come together to solve problems and explore new productivity ideas for real-world manufacturers.
Read More
Addition of 5-axis training program draws national attention
01/21/2016 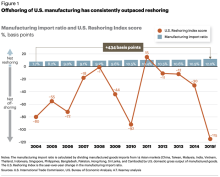 U.S. manufacturing reshoring trends appear to have been short-lived, according to a Dec. 21 news release from A.T. Kearney, a global management consulting firm headquartered in Chicago. "The reshoring phenomenon appears to have been more a one-off aberration than an inexorable trend," the firm reported, citing new data from its second annual A.T. Kearney U.S. Reshoring Index. "Data from 2015 confirms that offshoring is gathering steam, while the reshoring train has yet to leave the station."
Read More
Companies seek qualification for additive manufacturing of aircraft parts
01/20/2016 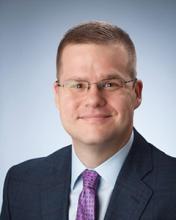 Manufacturers face "unprecedented global complexity," according to a Jan. 12 blog post on the website for the Manufacturers Alliance for Productivity and Innovation (MAPI). "The sector is now powered by software and data every bit as much as by steel and electricity," continued the post, which was authored by MAPI Marketing Council Manager Cam Mackey. "The ability to access insights about how to survive and thrive has never been more critical. "Recent shifts in technologies, demographics and markets have created a new normal for manufacturers. Those that adapt quickly will emerge more innovative and agile than their competitors, but not without undergoing a transformation in everything from the people they hire to how they create value," Mackey observed in report titled, "The Impact of Megatrends on U.S. Manufacturers."
Read More
Arbor designed for grinder producing shaped bone fragments
01/19/2016 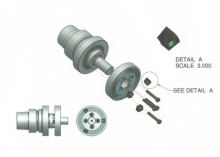 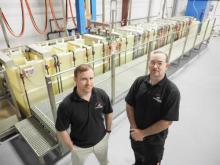 Jay Timmons, National Association of Manufacturers (NAM) president and CEO, will kick off the 2016 State of Manufacturing Tour on Jan. 28 at Saint Anselm College in Manchester, N.H. Joining Timmons will be Neil Levesque, executive director of the New Hampshire Institute of Politics and Political Library, and Jim Roche, president of the Business and Industry Association of New Hampshire.
Read More