3D Printing of titanium gets off the ground 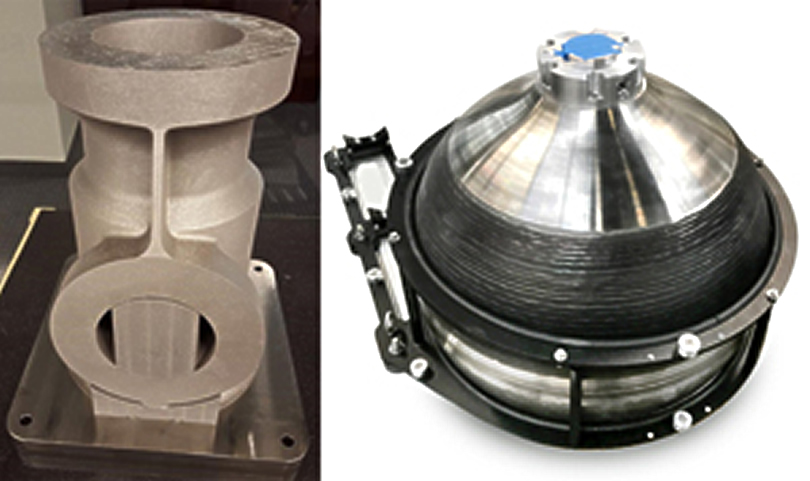 Two companies, using different 3D-printing methods, have put titanium components into extreme environments. SLM Solutions recently completed a 12.21" × 8.74" × 8.66" dia. titanium aircraft component using its two-laser selective laser melting process. And Sciaky Inc. has used its Electron Beam Additive Manufacturing (EBAM) technology to produce a titanium Variable Ballast (VB) tank for an autonomous submarine. Now that such critical additive-made titanium parts are out of the lab and in use, these companies and their competitors are working to speed their processes and increase their maximum build sizes.

The companies’ processes have one similarity. What they have in common is that each of their additive processes rely on melting, rather than sintering, the titanium material to build up the workpiece layer by layer. Sintering, a common metal additive process, compacts and fuses particles—usually powder—by using heat, but without melting them. Both SLM Solutions and Sciaky actually melt the titanium to form those layers.

The SLM Solutions process is performed in a closed-loop powder handling and inert gas atmosphere. Titanium in the form of powder is evenly distributed on a substrate and then melted by laser in layers from 20 – 75 μm. In the interest of speed, not one but two lasers work simultaneously on the part in an overlap area, which enables not only a faster build but that large part size as well. SLM Solutions stated that it carried out tests on these overlap areas showing there is no difference in quality between the area built exclusively by one laser and the area in the overlap worked on by both lasers interchangeably.

The aircraft component is noteworthy “because of its size and the fact that it was built out of titanium in six and a half days with no process interruptions,” stated Mike Hansen, applications engineer for SLM Solutions North America.

Sciaky Inc. also noted the speed of its process, stating that it helped submarine maker ISE reduce production time of its VB tank from 16 weeks to 8 weeks, as well as reduce overall costs. Prior to Sciaky’s involvement, the tanks were made via forging. A contributor to the speed of the EBAM process—and a major way it differs from the SLM process is that instead of starting with powdered titanium, it uses titanium wire feedstock, which is melted layer by layer by electron beam heat to produce a near-net shape part inside a vacuum chamber.