Women to play an increasingly important role in manufacturing industry

Though Rosie the Riveter and a multitude of her sisters proved that women were perfectly capable of working in manufacturing when the men were called to serve during World War II, many of these patriotic women graciously stepped aside to allow the returning soldiers to resume their jobs. Since then, the number of women in manufacturing jobs has yet to recover.

According to a 2015 report by consultancy Deloitte LLP, in conjunction with The Manufacturing Institute and the APICS Supply Chain Council, women hold only 27 percent of U.S. manufacturing jobs, even though they make up 47 percent of the total labor force. “Women are underrepresented in every manufacturing sector in the U.S.,” the report stated.

Many women who make their careers in manufacturing arrive there through the influence of male family members. Alicia Svaldi, president of Faustson Tool Corp., worked with her husband, Paul Svaldi, in the business for many years. The Arvada, Colo., company is a 5-axis milling and multiple-axis EDM shop specializing in making parts for the aerospace, aeronautics, defense and semiconductor industries.

When her husband passed away 6 years ago, Svaldi not only showed the tenacity to continue in the male-dominated business, she generated a new vision for Faustson and entered the emerging-technology arena of additive manufacturing.

“The voice of the customer drove our decision to go in this direction,” said Heidi Hostetter, vice president of Faustson. “We made a decision that a center of excellence was necessary to pull this together.”

Hostetter spearheaded a group that applied for funding for a 3D printing R&D center. Other members of the team are Lockheed Martin Corp., Littleton, Colo., the Colorado School of Mines, Ball Aerospace & Technologies  Corp., Boulder, Colo., and the Manufacturer’s Edge, a statewide manufacturing  assistance center funded in part by the National Institute of Standards and Technology.

The team is committed to making Colorado the premier state in advanced manufacturing and 3D printing of metal parts for aerospace applications. Combining their own contributions with a $2.5 million grant from the Colorado Office of Economic Development and International Trade, the team plans to build an R&D center at the School of Mines dedicated to performing applied research and creating the database infrastructure needed to qualify 3D metal printers and their parts. 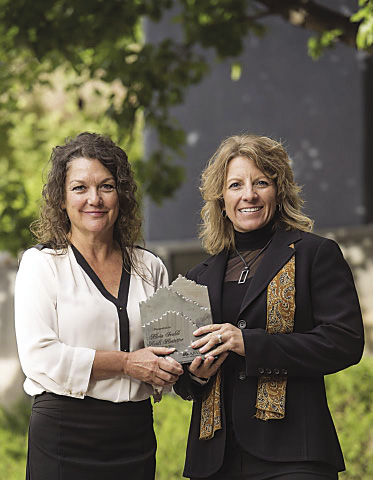 Another woman who came into a manufacturing career through her husband is Sheri Dron, a CNC machinist at Walker Manufacturing, Ft. Collins, Colo. Dron was married to Ken Dron, a machinist who built a shop on their property and began doing work for a few customers at night while holding down his day job at St. Vrain Manufacturing Inc., Longmont, Colo.

Their original plan was for Sheri to run the office while Ken produced parts on the shop’s two milling machines. At one point, he showed Sheri how to run the machines after he had set up and programmed them, and she turned out to be good at it. Sadly, Ken died unexpectedly from a heart attack, leaving Sheri, a stay-at-home mom, unsure if she could keep their house and the shop. 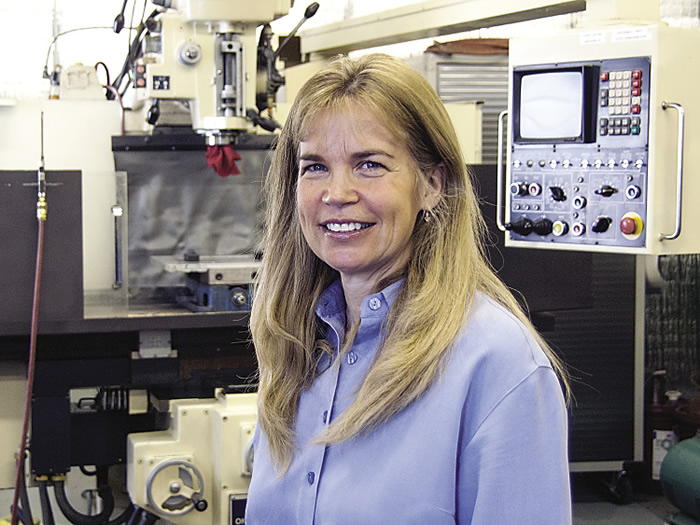 “I never thought I would actually work in the field, because it is a male-dominated environment, and I just didn’t know how that would go,” Dron said.

The first summer after starting the program, she served an internship at Whipmix Corp., Ft. Collins, where she found that “the guys were amazing. They were just very willing to share their knowledge and were extremely helpful.”

After graduation, she was hired by Walker Manufacturing, where, again, she has been treated well. The company is helping Dron with her goal of learning how to run all the machines so that someday she will be able to run the shop on her property.

Dron still services those same few clients that her husband originally worked for, doing the jobs he taught her. Her ultimate goal is to invent a medical product that will help emergency medical technicians save the lives of heart attack victims and manufacture it in her machine shop.

The prevailing view of the manufacturing world among the general public is that it’s dark, dirty and dangerous. While this may be true in some cases, modern manufacturing has become a digitally driven enterprise, more similar to computing than shoveling chips.

To the surprise of many, “we hear that Faustson is a very clean and organized environment from every customer we have,” Hostetter said, adding that she sees manufacturing as becoming more welcoming for women.

According to the Deloitte report, with the increasing projected skills gap in manufacturing, it is more important than ever for manufacturers to reach out, create positive perceptions of manufacturing and make jobs more attractive and accessible to women, who will soon make up more than half of the U.S. workforce.

The machining program at the community college that Dron attended is just one of many technical training programs that works with local companies to develop a workforce with the skills needed to succeed in manufacturing.

With these and other training opportunities, in addition to the many science, technology, engineering and mathematics (STEM) programs and the power of professional organizations such as Women in Manufacturing, women are slowly rejoining the manufacturing workforce.