Nueva Precision Inc. is not interested in expanding its business. Similar to some other job shops, the Milliken, Colorado, manufacturer wants to boost machining efficiency and productivity. Owners Heriberto “Eddie” Casanueva and his wife, Leandra, are the only full-time employees, which enables customers to deal directly with the person making their parts.

The main customers are in the aerospace, pharmaceutical and unmanned aerial vehicle industries. The list of workpiece materials includes aluminum, titanium, stainless steel and exotics.

“Stuff that I never heard of,” Eddie said. “There’s an odd group of materials that are approved to go up into space because (of) the hydrogen embrittlement process that happens in space.” 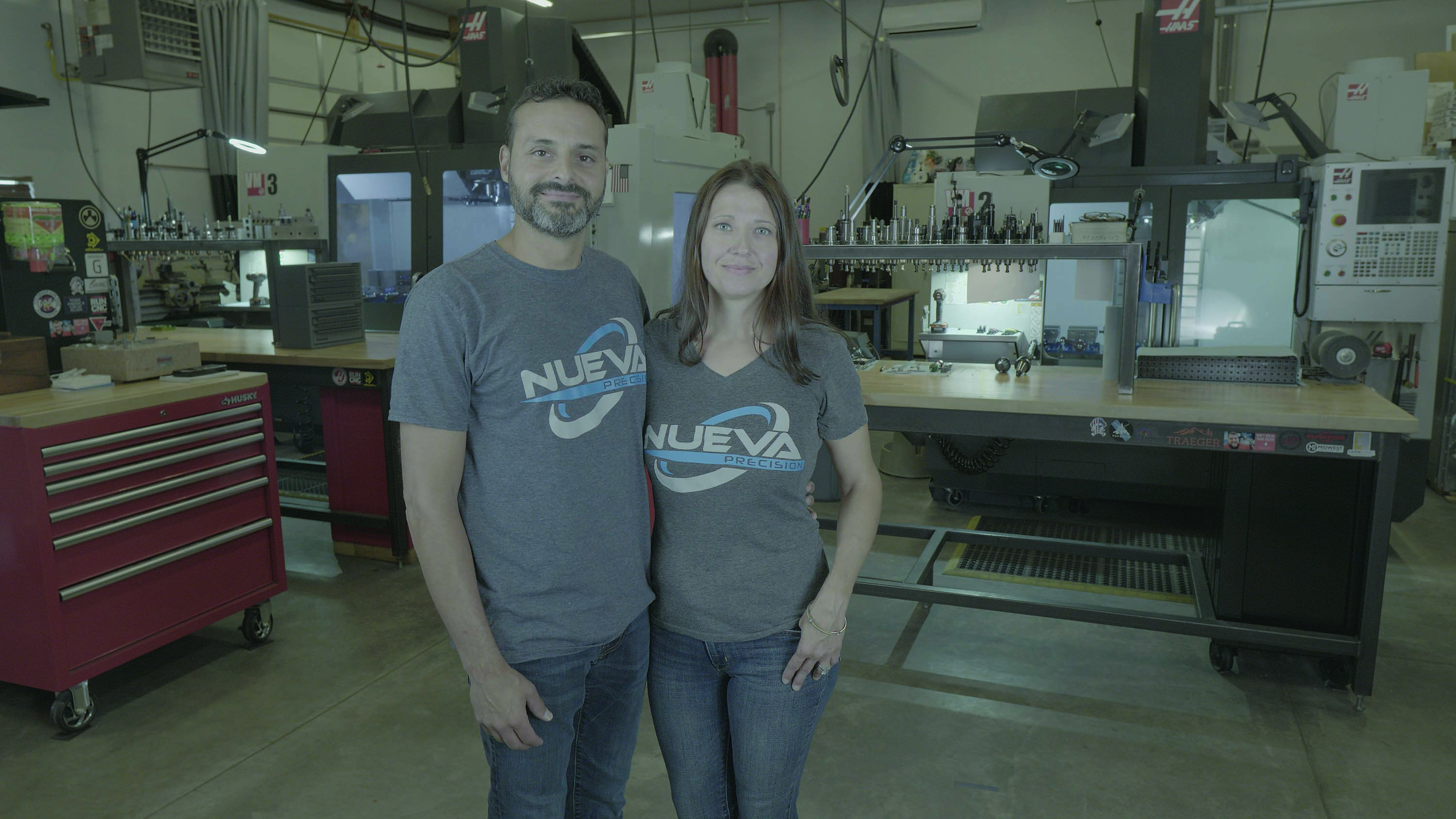 “This means I basically machine hardened parts,” Eddie said, “some of which are as hard as 59 HRC.”

Job lot sizes range from a few pieces to some that run into the thousands over the full span of a long-running job.

“I take a lot of pleasure in taking whatever challenges come through the door,” Eddie said.

The latest machine tool at the shop is a five-axis DMG Mori, which has a 20,000-rpm spindle. With its higher spindle speed than the other three machines there, he found that his standard collet chucks were unable to handle the increased cutting speeds and forces when taking aggressive cuts.

“You always want to remove material as fast as you can,” Eddie said, “but occasionally it bites you in the butt. You either pull a part out of the vise or you start pulling a tool out of the holder.”

He said the worst problems occur when aggressively cutting aluminum. As a result, he frequently reduces machining parameters about 20% to 30% for those types of applications.

“You may not even need to,” Eddie said, “but you are being conservative on that stuff because you’ll scrap a part in no time if that happens.”

He decided to search for a better toolholding system at a major trade show, initially thinking that shrink-fit toolholders might be the best option. While investigating, he stumbled upon the powRgrip, also known as PG, toolholding collet system from Rego-Fix Tool Corp. in Whitestown, Indiana, and spent a considerable amount of time evaluating it. The PG system includes a holder, collet and tool load/unload device that generates 5.4 metric tons (6 tons) of force, relying on the interference between the holder and collet to generate the clamping force.

“Honestly, I did waver back and forth on which type of toolholding system to use,” Eddie said. “But in the end, I realized shrink-fit wasn’t a good fit for the shop.”

One reason that he felt shrink-fit toolholders were not the best choice was because he did not want to take the time to heat toolholders to expand their bores and then wait for them to cool.

“What really drew me to the Rego-Fix system was just the simplicity of it,” Eddie said. “You just press the collet in and out.”

Rego-Fix Tool reports that it takes about 10 seconds to press in a tool or remove it from a holder.

Once the shop began to use PG toolholders, Eddie said they eliminated the cutter pullout problem.

“The minute I started using PG,” he said, “particularly in my rough milling operations, any problems with cutter pullout disappeared. Now I use the holders for any applications where there is even the slightest risk of cutter pullout.”

In addition, the holders have a total indicator runout of less than 0.0025 mm (0.0001") to allow Nueva Precision to take full advantage of the aggressive toolpaths and high spindle speeds. 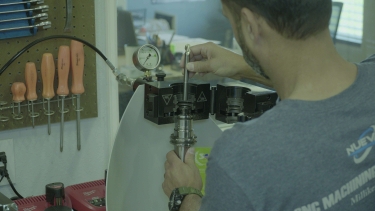 Eddie Casanueva prepares to place a tool into a holder with the powRgrip toolholding collet system. Image courtesy of Rego-Fix Tool

“When I want a nice finish on a higher-end part,” Eddie said, “the small amount of runout provides a really nice finish.”

“Those are removal rates I couldn’t even obtain before I bought the Rego-Fix system,” Eddie said.

He said the shop started with about a dozen PG holders and now has about 50, which are HSK holders. In addition to collet chucks, the shop has hydraulic holders and milling chucks. They typically hold tools larger than 25.4 mm (1") in diameter. He acknowledged that other types of holders are suitable for some shop applications.

“There are specific areas where I use the Rego-Fix system,” Eddie said. “I can get away with standard collet chucks on most of it. It helps me with the life span of the PG holders.”

He said he also benefits from PG holders for four-axis rotary milling work. In these instances, the small, slimmer nose profiles of his PG 25 and PG 15 holders allow him to access tough-to-reach part areas and avoid hitting workholders.

“You buy these extended holders or slim holders,” Eddie said, “and then you have the option of a different size collet for that holder. So it gives you the flexibility of running a variety of collets with that one holder.”