When it comes to threading, don’t be intimidated by titanium. Although it’s notoriously difficult to machine, titanium can be successfully tapped by combining the right equipment with practices that facilitate the process. And if tapping doesn’t measure up to your standards, a threading alternative can help users meet the requirements of the most demanding titanium applications.

To begin with, shops tackling the job of tapping titanium should make sure they have a rigid workholding setup so there’s no workpiece movement during the process, said Joe Gillilan, applications engineer at Tapmatic Corp., a developer of tapping attachments and tapholders in Post Falls, Idaho. He also recommends a modern CNC machine with a rigid tapping cycle that synchronizes spindle rotation to match the feed advance of a particular tap pitch.

Providing much better control over tap position than floating tapping, rigid tapping “keeps getting more and more accurate as machines get better,” he said. “It’s really helped with tool life and thread quality.”

Although the rigid or synchronized tapping cycle is very accurate, it can’t prevent small discrepancies between the machine synchronization and the actual tap pitch. While small, these differences can cause big problems when tapping titanium.

“The tap has to run in a condition where there’s no pushing, pulling or pressure on the flank surfaces,” said Mark Hatch, product director at Emuge-Franken USA, a tool manufacturer in West Boylston, Massachusetts. “If the feed is off, you’re going to get an imperfection in the thread form and uneven cutting forces on the tool that can cause premature failure.”

To solve this problem, both Emuge-Franken and Tapmatic offer tapholders designed to provide a minor amount of positional compensation during rigid tapping. The result, according to both companies, is much better thread quality and significantly longer tap life.

When tapping titanium, Gillilan noted, tool life will always be shorter than it would be if the operation were performed on a material that is less difficult to machine — and a worst-case scenario is tap breakage during the process. An easy way to minimize these tool-related downsides is to use a tap made for titanium.

“A lot of job shops might try to use a universal tap,” he said, “which can be done as long as it’s of high quality.”

But Gillilan added that titanium tapping shortens the life of even high-quality universal taps.

“If you’re doing a real short run, that could be OK,” he said. “But if it’s a company that does a lot of titanium tapping, a tap made specifically for titanium is ideal.”

Emuge-Franken makes taps with geometries and coatings aimed at improving tool life and thread quality in titanium applications. Hatch said a major challenge in making these tools is dealing with the high compressive forces produced by titanium tapping. Emuge-Franken does this by giving the taps a high-relief geometry, which increases the space between friction surfaces for improved lubrication and reduced torque load in both the forward and reverse directions.

In addition, he pointed out that taps designed to thread titanium need a flute angle that provides enough core strength to handle the high cutting torque produced by the process. This means that high-helix taps — with higher hook angles to improve shearing action in soft, ductile materials — cannot be used for titanium.

On the other hand, Gillilan said roll form taps can be a good choice for creating small threads in titanium. These fluteless tools, which create threads by moving material rather than cutting action, are often used for titanium tapping because they offer a strong cross section that lessens the chance of tool breakage, he noted.

The right tap design also makes it easier to move chips out of a hole. This is particularly helpful when tapping titanium, which presents chip-forming difficulties. So Emuge-Franken offers tap geometries designed specifically to move chips out of a through hole or blind hole. The company’s through-hole tap geometry pushes titanium chips forward so they exit the hole on the side opposite the one that the tap entered. For a blind hole, Hatch said the company has a tap design that allows chips to be drawn out with the assistance of a fluid.

As for coatings, he said Emuge-Franken uses a TiCN formulation that helps a tool deal with the high compression forces produced when tapping titanium by increasing mechanical resistance to edge wear and improving sliding characteristics.

Besides equipping themselves to increase the chances for success when tapping titanium, shops taking on the task can benefit by following some expert advice on the subject. Gillilan, for example, recommends that titanium tappers follow their tap manufacturer’s guidelines for speeds and feeds. In many cases, he said these will call for tapping titanium a little slower than other materials due to titanium’s lower thermal conductivity, which results in more heat being transferred to the tool during tapping.

For this reason, he said shops can significantly extend tool life by using high-pressure through-spindle coolant when tapping titanium. Besides cooling the tap, he said the fluid helps evacuate chips that could damage the tool.

In addition, Hatch said coolants provide lubrication that is critical when tapping titanium. So he recommends that shops doing the job opt for a high-quality emulsion coolant with a concentration of approximately 10%.

“If I’m drilling or milling, I’m not looking for so much lubricity from the coolant, so I can get away with lower concentration levels,” he said. The tapping process, however, “is the most demanding of lubricity. If you don’t have enough concentration in your coolant, you could experience (tap) breakage problems or premature failure of the tap from poor lubrication.”

Hatch said tap breakage at the end of a part manufacturing process can be catastrophic. In the aerospace industry, for example, it can cause the loss of extremely expensive components, as well as missed delivery schedules for firms involved with just-in-time manufacturing.

In cases like this, manufacturers can say “no thanks” to tapping and instead opt for thread milling, a process he calls the most significant development in threading titanium. His company sells several types of thread mills, which are popular in the aerospace and medical industries. Thread milling has been widely adopted in both industries by firms trying to avoid some of the difficulties involved in tapping titanium, he reported.

“It’s too costly and time-consuming for them to do a cycle stop and have an operator apply an oil or paste because they’re having problems with low lubricity that’s failing the tap,” Hatch said, adding that a thread mill does not need high lubricity.

In addition, he said tapping is a continuous cutting process and titanium is a long-chipping material. Therefore, tapping titanium produces long chip shapes that increase the possibility of chip jamming, which causes torque spikes that can eventually break a tap. By contrast, he said, thread milling is an interrupted cutting process that produces short “comma chips” that are much less likely to cause problematic chip jamming.

So even if tapping doesn’t cut it for you, there’s no need to fear the prospect of threading titanium. Whatever the challenges of a particular application, tools and techniques exist that are up to the job. 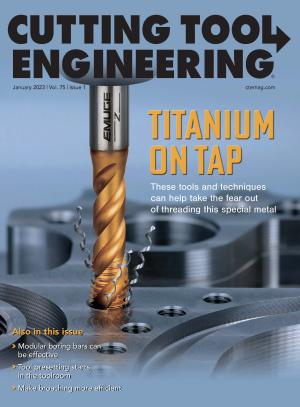