While thread milling is a well-established process, some machine shops are still afraid to try it, fearing it is too complicated. “Thread milling is not a big mystery, but some shops are hesitant to do it,” said Joe Mazzenga, sales manager for J.M. Sales - USA, Troy, Mich., which offers solid-carbide and indexable-insert thread mills. “In reality, we can set up a customer to successfully thread mill fairly easily—as long as they have the right tooling.”

Thread milling requires a machining center capable of helical interpolation, which requires three axes of simultaneous movement. Two axes perform circular interpolation while the third moves perpendicular to the circular plane. Most CNC machines built in the last 10 to 15 years have this capability. 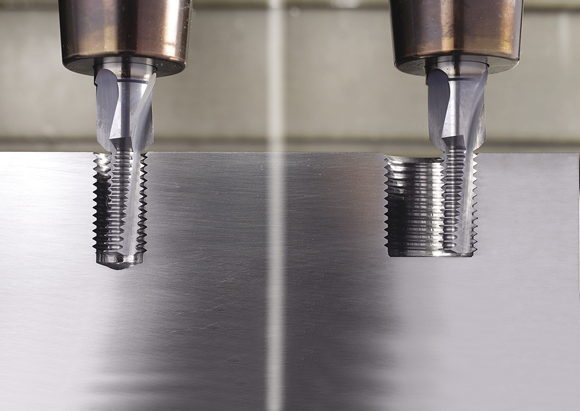 The inserted type with multiple flutes is typically for thread milling holes ¾ " in diameter or larger because there has to be enough room for the tool body and inserts. Smaller inserted thread mills are available but they usually have only one or two flutes.

“In a lot of cases, when you get into holes ¾ " and smaller you can still get a 4- or 6-flute solid cutter in there to do the job,” Hartford said. “With the inserted cutter, you could only get possibly one insert in there so your cycle times would be slow. For example, in 316 stainless steel, a single-flute thread mill would take 40 to 45 seconds to thread a hole. With a 4-flute, solid-carbide thread mill, it would take 6 to 8 seconds.”

“While both solid-carbide and inserted thread mills are suited for larger diameter holes, it can be advantageous to use smaller solid-carbide tools as they can typically run at higher feed rates,” said Wolfgang Ruff, vice president of engineering for KOMET of America Inc., Schaumburg, Ill. “For instance, if you have an M80×1.5 thread, you can run a 50mm-dia. inserted thread mill, which would have five cutting edges. You can also choose a 20mm-dia. solid-carbide thread mill, which will also have five cutting edges, but will run at more than twice the feed rate, effectively cutting the production time for each hole by half. This makes a huge difference for large production runs.”

Inserted thread mills can be good for smaller job shops with small production runs. One tool body can use multiple replaceable inserts with different thread forms, so it is more versatile and less expensive overall.

“They operate the same, but there is the cost difference,” Hartford said. “The tool body would cost about $300 to $450, but the inserts are only about $30 when replacement is needed. With the solid-carbide thread mill, the entire tool needs to be replaced at a $200 to $300 price tag. Also, it is easier for an operator to change an insert than to change an entire tool and requalify it.”

KOMET’s Ruff pointed out that inserts must be precisely positioned in the pockets. “If they are not, there is a mismatch from one insert to another and you cannot produce the proper thread.” KOMET offers solid-carbide thread mills as standard tools and inserted ones as specials.

“We use the helical almost exclusively,” Mazzenga said. “With a helical-flute cutter, you get a much smoother, quieter cut because the engagement of the teeth is spread over a greater range. On a straight-flute cutter, all the teeth on a given flute engage at the same time. This creates a greater amount of radial pressure, causing chatter and deflection.”

Nevertheless, straight flutes have a geometry suited for hard materials from 55 to 64 HRC. “The rake angle on a straight flute is constant,” Mazzenga noted.

Most thread mills, solid carbide or inserted, are multitooth tools. The teeth are arranged parallel, rather than helically like a tap. Multitooth thread mills cut the full depth of the thread in a single rotation around the hole. 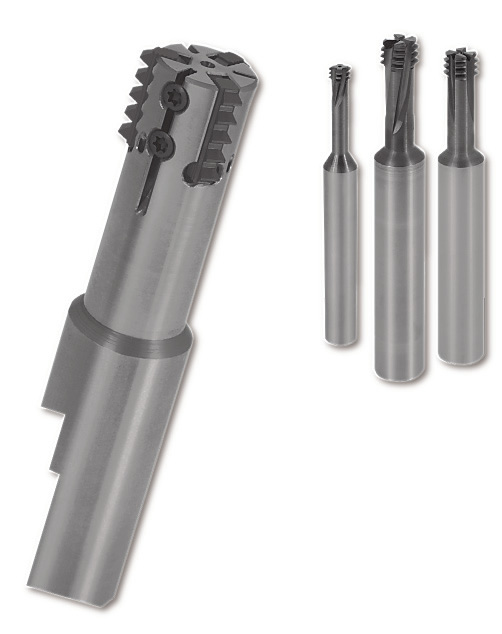 One multitooth thread mill can cut threads of the same pitch in a range of diameters. This is because the diameter is determined by the CNC toolpath instead of the tool (as with a tap). “With a fixed pitch, the multiform tool can cut any 20-pitch thread, whether it is ¼-20, ¾-20 or 2"-20, as long as it can fit in the hole,” said Stephan Francescone, production manager for Harvey Tool Co. LLC, Rowley, Mass., which makes single- and multiple-form solid-carbide thread mills.

“The multiform thread mill is fast because all those peaks and valleys are cutting at the same time to create the thread,” said Jeff Davis, vice president of engineering for Harvey Tool. “The downside is that you’re locked into the pitch because of those peaks and valleys. Anytime you see more than one triangular thread form on a tool, you have a fixed-pitch situation.” Each thread pitch requires a different tool.

“Even though they have to buy a thread mill for each pitch, larger production shops lean toward a multiform so they have a nice array of tools,” Davis said. “The single-form tools lend themselves more to smaller job shops that want a more flexible tool.” 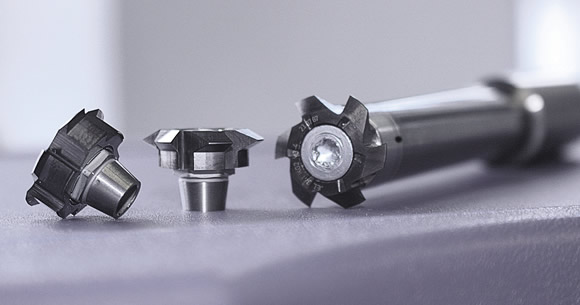 J.M. Sales - USA’s Mazzenga said his company doesn’t subscribe to the belief that thread mills can be used for any diameter as long as the pitch is the same. “It is somewhat correct, but we don’t define it that loosely,” he said. “Our thread mills are designed to cut the thread on the minor diameter as well as the flank and the crest. Most of our thread mills are manufactured for a specific pitch and diameter.

“We define that thread mill more completely than just 60° included threads (standard thread forms are 60° included),” he continued. “In reality, if you try to make your thread mill as large as possible for a specific thread and don’t compensate that form in the tool itself, you will produce threads that border the thread tolerance boundaries. It is quite possible to make an adjustment on the machine for pitch diameter and then have an oversize minor diameter. We correct the thread form of the tool to allow for this.”

In general, a thread mill is limited to going about 3 diameters deep because the cutting forces are not balanced.

“You really don’t want to take a thread mill any deeper than three times diameter, particularly with a course pitch,” Mazzenga said. “Anything deeper, and there is a tremendous amount of radial pressure being applied, which causes deflection. The chances of being successful in one shot are greatly reduced. If you have to go deeper, you should take a pass at the top of the thread, maybe go half way down and take a pass, then drop down deeper and take another pass. And, with CNC, your threads will link up.”

However, some manufacturers question the need for deep threaded holes. “When you get to 2.5 diameters deep, you have reached maximum strength for the thread. There is no benefit to designing a deeper thread,” Ruff said. “There is no need to overengineer the parts and make them more costly to produce.” 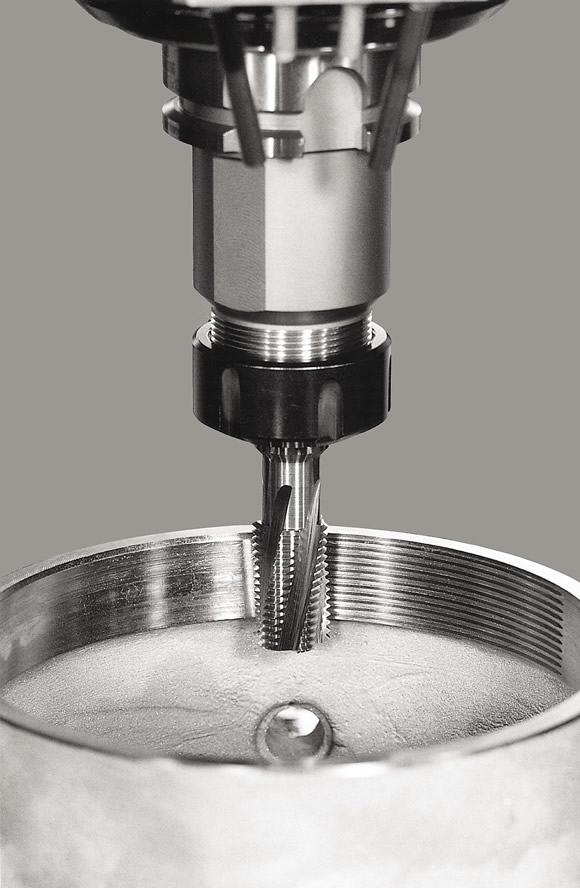 J.M. Sales’ GFM thread mill cuts a thread much larger than the tool itself.

Because the thread mill is circular interpolated, the actual feed rate at the cutting edge will be different from what is programmed at the center of the tool. “A thread mill is always traveling in a circle, so the centerline of the tool is going to be traveling at a different speed than the OD of the tool,” Harvey Tool’s Francescone said. “So you need to compensate for that in your feed rate. In the case of an internal thread, you scale your linear feed rate down, and in the case of an external thread, scale it up.”

Many thread milling programs start by going perpendicular into the hole wall, which causes vibration in the tool and tool marks on the thread, according to KOMET’s Ruff. Once the tool starts vibrating, it will not stop for the duration of the operation. To eliminate these prolems, he recommends starting the process by gradually approaching the hole wall with a circular motion, then going to the full cutting depth. KOMET offers a program for this that can be downloaded from its Web site. Apple and Android apps are also available.

There are a variety of reasons thread milling is used instead of other threadmaking operations, specifically tapping.

As previously stated, a thread mill can address a range of hole diameters. The diameter of a tap is fixed.

For large diameters, thread mills can be more economical. Large taps can be expensive. 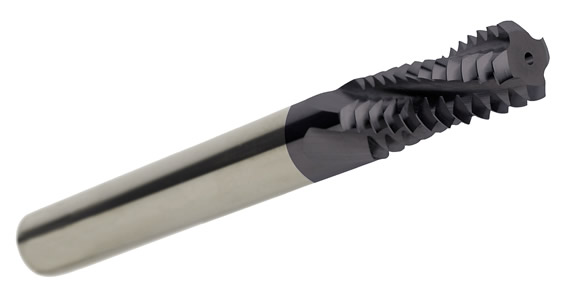 If a thread mill breaks during operation, the pieces can be removed from the hole and a new tool makes the thread. Because a tap produces a great deal of contact along the cut, creating a lot of force, taps can break and become stuck in the hole, possibly causing scrap. 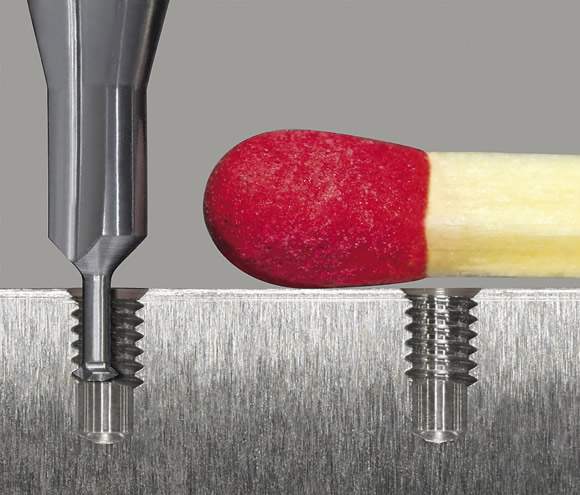 KOMET’s JEL Micro is for threading materials with a hardness from 45 to 60 HRC. The M1×1.5 thread mill has a diameter smaller than 0.75mm.

Thread mills can produce a full thread close to the bottom of a blind-hole. When the hole is blind, a tap can only reach so far because it has a tapered point. “Your thread form will be within half a pitch from the bottom of the hole,” Advent’s Hartford said. “That is as close as you can get.”

A thread mill imparts a finer surface finish than a tap.

Thread mills produce a thread in one or more passes. “With thread milling, you can probably do it in one pass if it is a softer material, like aluminum,” Harvey Tool’s Davis said. “But in a hard material, you could take more passes without breaking the tool. Tapping uses the whole thread form and it jumps to final size in one pass.”

And finally, thread mills, unlike taps, can combine various operations into a single tool. For instance, manufacturers offer tools that can drill a hole, chamfer it, and then mill the thread in one step. CTE