Bryce Samson has watched laser machining evolve over the past 30 years into a formidable industrial practice. The director of sales at Oxford, Mass.-based IPG Photonics Corp., which manufactures fiber laser systems, remembers the inefficiency and high maintenance involved with the large, expensive machines of the 1990s.

“They took a lot of hand-holding,” he said.

Troy Wilson similarly recalls the difficulty of laser cutting several decades ago compared with today’s ease of use. “Back in the ’80s, you needed a white lab coat to use the machines,” said Wilson, product manager for the table products division at Cincinnati Inc., a Harrison, Ohio, manufacturer of CO2 and fiber lasers. 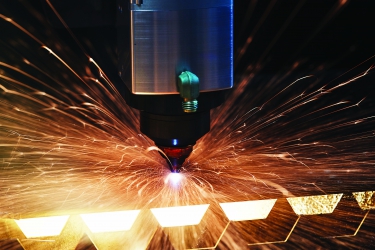 The technology of earlier-generation lasers—mostly CO2 systems—began to mature at about the time that fiber lasers entered the market. CO2 lasers have continued to receive tweaks that benefit users, and the systems remain popular. However, fiber lasers are increasingly viewed as the future. Users cite fiber lasers’ compact size, high reliability, long life expectancy, fast cutting speed and affordable cost.

Wilson said fiber lasers, which began to be used to cut metal about a decade ago, have reduced the cost of CO2 machines. This has helped a lot of cash-strapped companies obtain used CO2 equipment.

“They can get a quality product that makes quality parts at a very reasonable rate,” he said. “Get your foot in the door, get yourself established, make some money, then upgrade to a newer machine.”

If the newer machine is a fiber system, then it should provide much more consistent laser beam quality, Wilson said. Unlike CO2 systems, fiber systems are not negatively impacted by outside influences, such as temperature and humidity, so a machine can operate for weeks and months with consistent results. Also, a fiber laser consumes significantly less power.

IPG Photonics released its smallest fiber laser system, the 4'×4' LaserCube, a few years ago. Samson said the standard sizes for machines are 4'×8' and 6'×12'. The company wanted to come to market with a product at the low end of the price range to appeal to manufacturers that are considering buying their first laser cutting system. Other targets were companies that already had a machine but wanted a smaller one for small jobs or parts and companies with tight budgets or a lack of manufacturing space for a typical system. 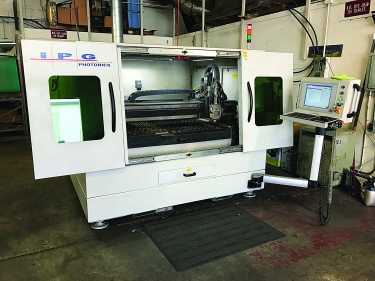 He said the LaserCube has expanded the low end of the market and widened the adoption of laser systems. “It’s becoming more accepted that you don’t have to have a half-million dollars to get a 4'x8' machine. You can spend less money and still get high-quality, high-speed cutting.”

Although the smaller unit often is used to make small parts, Samson said he has seen manufacturers also use it to process overflow jobs that cannot be promptly handled by a shop’s main machines.

Serra Laser and Waterjet Inc., a job shop in Anaheim, Calif., has 10 laser systems: nine CO2 lasers and one fiber, a LaserCube.

“Our next machine is going to be a fiber too,” said the company’s president, Glenn Kline, who has been in the laser machining business since 1980. “They’re faster. There’s basically no maintenance on the machine like there is with the CO2. And it takes a lot less electricity to run them. Our electricity bill right now is about $22,000 a month. The fibers require less than half the electricity of the CO2s.” 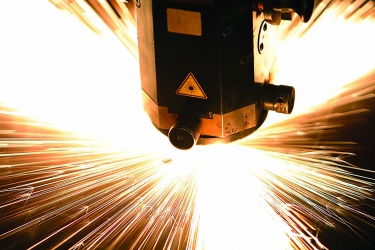 He likes the accuracy of the LaserCube, especially for parts in the 1⁄4"×1⁄4" range. “The accuracy doesn’t change because there’s no mechanical system that wears out and has inherent inaccuracy,” he said. “Ten years from today, we’ll have the same accuracy.”

Kline also appreciates the affordability of the machine.

A long-standing challenge for laser machining has been cutting metals that are highly reflective, such as brass, certain highly polished stainless steel alloys and, especially, copper. Energy reflected back toward a laser is a serious concern because of the potential damage to the system. A laser can become unstable, resulting in rapid power fluctuations and preventing work from being done. Even worse, energy reflection can cause catastrophic damage to the system, followed by lengthy downtimes and extensive repairs.

Shawn Streeby, director of business development at nLight Inc., Vancouver, Wash., said the manufacturer of fiber lasers and components has solved this problem. The company began incorporating back reflection technology into its lasers in 2015. The technology reportedly works so well that an nLight laser can be fully reflected upon itself for 100 consecutive hours without sustaining damage.

He said it has taken a couple of years for the technology to become accepted. “People were still very hesitant to use our lasers with reflective metals because of their earlier experiences,” he said. “It took us a while to get shops to demo our systems and process reflective metals. They were convinced it was going to severely damage the laser system.” 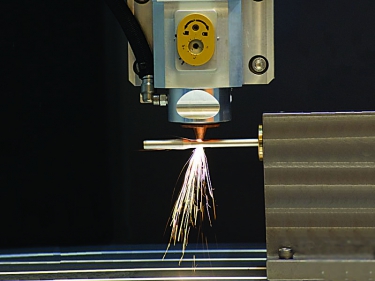 Streeby said the traditional way of dealing with reflectivity has been to use sensors to detect reflection and shut down the laser before damage occurred. Even if damage is avoided, such interruptions can make work inefficient at best.

Cincinnati incorporated nLight’s back-reflection technology into its fiber lasers this year. “You can cut through reflective metals and not care,” Wilson said.

Sources said changes are coming fast for laser machining. Power ratings are going up while prices are staying the same or even coming down. Samson said the average power of a fiber laser cutting system several years ago was 3kW or 4kW. Now it is from 6kW to 8kW, and he expects the range to be from 10kW to 12kW in 5 years.

He also thinks laser machining will displace some waterjet and plasma cutting. “The average power goes up every year,” he said. “That means that people can cut faster and also cut thicker materials.”

“We’re actually doubling the power every 10 years,” Streeby said. “Also, the technology in general is becoming more reliable and more feature-rich, so the lasers are providing new capabilities, like processing copper.”

Wilson anticipates many changes to fiber laser systems in the years ahead. He said for the first 20 years that CO2 laser systems were widely used, there was a flurry of development, which culminated in today’s reliable device. Fiber systems are in the same growth and development pattern.

“I firmly expect, every 18 months or so, to see a major player in the fiber world come out with a big innovation,” he said. “Fiber is gaining mass adoption but has many years of innovative growth yet ahead.”

Kline said there are four reasons to buy a new machine of any kind and that, for laser cutting systems, the reasons are becoming more compelling. They are to add manufacturing capacity, add a capability, improve a process and keep up with competitors. Those four factors are why he plans to continue updating his shop’s laser systems.

“You don’t want to fall behind,” he said. 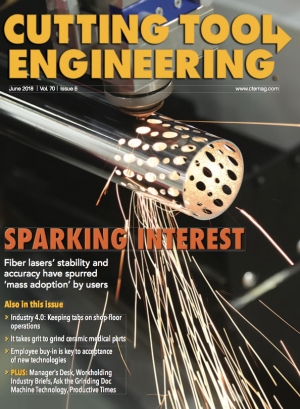