Taking a turn for the better

By packaging both turning and milling functions in a single machining center, machine tool builders believe they’ve hit on a winning combination that can boost part quality while also slashing cycle times, space and costs.

Efforts to include more than one machining capability in a single machine go back a couple of decades, said Errol Burrell, machining center product specialist for Okuma America Corp., Charlotte, N.C. Why the interest in multitask machines?

Turn-Cut is a programming option that enables a horizontal machining center to create surfaces that taper, arc or change in other ways along the Z-axis of a workpiece. Image courtesy of Okuma America.

“Work space is at a premium,” said Burrell, whose company offers Turn-Cut, a programming option that adds turning capabilities to a horizontal machining center. “So, if you have a machine that does both milling and turning, now you’ve got just one machine taking up a smaller space [than two machines].”

Additionally, splitting up milling and turning among multiple machines can require users to make four or five setups, said Simon Knecht, NAFTA region sales manager for Germany-based STAMA Maschinenfabrik GmbH. Charlotte-based Chiron America Inc. sells the company’s machines. STAMA has been building its integrated vertical milling and turning centers, called mill-turn machines, since 1999. “On the mill-turn, in the best case, you can finish in one or two clampings.”

Multiple setups on separate turning and milling machines require parts to be handled multiple times, thereby lengthening the production process, said Kelsey Hadley, a STAMA product specialist. “But by combining operations on the mill-turn machine, we can reduce the amount of part handling and the amount of nonproductive machining time.” 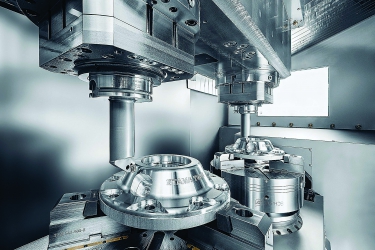 Hadley said mill-turn machines are a good choice for making complex parts, such as automatic transmissions, that require both milling and turning. Mill-turn candidates mentioned by Knecht include turbocharger parts, as well as bearing and turbine housings.

As for Turn-Cut, which requires the addition of scales and software to a conventional HMC, Burrell recommends it for large fabrications and things like castings for 2'-dia. (0.61m) pipes used by the oil and gas industry. Turn-Cut could be used to turn a feature like a groove or taper at the end of a pipe, as well as thread the end. “Anything you can do on a lathe, you can do with Turn-Cut,” Burrell said.

He added, however, that Turn-Cut may not be the best choice for components with diameters smaller than 3" (76.2mm). The smaller the component, he said, the less likely it will be that Turn-Cut can produce an adequate surface finish.

Turn-Cut users aren’t faced with any special challenges either, according to Burrell. When the time comes for turning, they simply switch to Turn-Cut mode. Then they proceed as they would if they were machining a part with a conventional lathe. 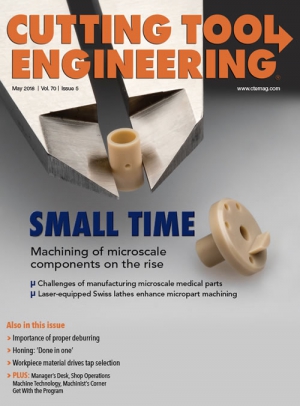